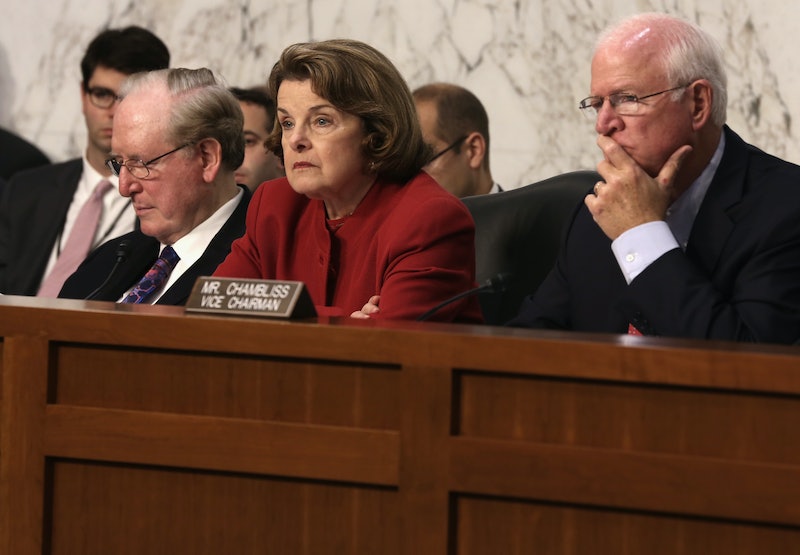 In what could be the least surprising news ever, the White House and other top legislators have rejected ex-government-contractor-come-whistleblower Edward Snowdend's bid for clemency, which he set out in a letter last week. In the page-long typed document, he asks for lenience over the charges of leaking classified NSA documents to the news media, saying, "speaking the truth is not a crime." A surprisingly hopeful move on Snowden's part, considering that the administration has consistently shot metaphorical daggers at the whistleblower, and even risked severing international ties over their displeasure at seeing him given asylum.

Last week, German Green MP Hans-Christian Stroebele met with Snowden in Moscow to discuss the possibility of the fugitive's helping the Germans with their investigations into the alleged U.S. tapping of Chancellor Angela Merkel's phone. Stroebele was then given the letter, which he showed to reporters at a news conference in Berlin Friday.

In the letter, Snowden cites his "moral duty to act," having witnessed "systemic violations of the law" by the government, calling on the U.S. to stop "criminaliz[ing] political speech." He adds that he is "confident that with the support of the international community, the government of the United Sates will abandon this harmful behavior."

Likewise, the leaders of the House and Senate Intelligence Committees weren't interested in giving anything whatsoever to Snowden.

"He needs to come back and own up," Rep. Mike Rogers, R-Mich., said. "We can have those conversations if he believes there are vulnerabilities in the system he'd like to disclose. You don't do it by committing a crime that puts soldiers' lives at risk in places like Afghanistan."

"He had an opportunity, if what he was was a whistleblower, to pick up the phone and call the House Intelligence Committee, the Senate Intelligence Committee and say, 'Look, I have some information you ought to see,' and we would certainly see him," Feinstein said. "That didn't happen, and now he's done this enormous disservice to our country."

Both legislators also staunchly defended the National Security Agency, insisting that the agency had done nothing more than follow orders and protect the country.

"It is the NSA, the CIA and others' charge to make that zero [deaths from terrorist attacks] happen here. Zero. That's our standard. And so, what we've asked them to do is go out and collect information that protects America," Rogers said. He added that "there are going to be some best actor awards coming out of the White House this year," referring to President Barack Obama and his recent surprise over the spying reveleations.

Feinstein, however, in spite of also defending the NSA, also admitted there was a need for a "review of the intelligence framework."

"I think where allies are close, tapping the private phones of theirs - particularly of the leader, the leader is what I'm talking about - has much more political liability than probably intelligence viability," she said.

Snowden's leaks over the last few months have, of course, caused diplomatic difficulties for the U.S., especially with France, Spain, Brazil and, most recently, Germany. U.S. Secretary of State John Kerry was forced to concede last week that, in some cases, the surveillance had gone too far, and vowed to work with the President on stopping further "inappropriate" spying activities.