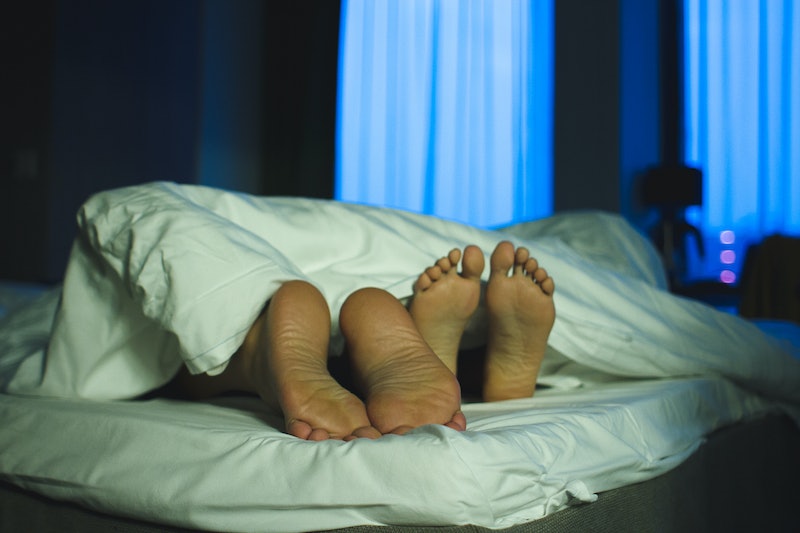 It's pretty confusing, this whole sex for women, sex for guys, sex for trans* people, sex for everyone thing. So many body parts are happening! So many hairs in places you thought hair shouldn’t grow! So many smells coming from places that shouldn’t be smelly! But think about how much more bewildering sex is for men (or how confusing sex would be for men, if they took the time to think about it more deeply than: “Need. Now.”). Male equipment is pretty straightforward. Women’s? A bit less so.

Ali Adler understands this: not only is she a woman in possession of such complicated equipment, she is also a lesbian. Plus, Adler is a hilarious TV writer, who’s often implicated (either willingly or not) in raunchy convos with her overwhelmingly male co-workers, during which she learns just how clueless grown-ass men can be when it comes to sex.

Here are some of Adler’s insights: you’ll want to share them with your S.O., stat.

“A kiss is the litmus test for fucking. If your kiss is gross, often things go no further than this."

"Be gentle, but strong, especially at first. Set the tone, but take cues from her. Don’t go leaping in. Your tongue is not a Mars rover; it is not an exploration device programmed to bring saliva samples back to NASA.”

“The tease is better than the squeeze."

"If you want to keep us in the game, don’t fixate on the boobs because you’ll distract or annoy us to the point of quitting. Don’t go squeezing everything all the time. Some women like it rougher, but even then, it’s often the absence of what a woman wants that arouses her the most.”

Treating the Clitoris WITH CARE OMGZ

“Despite what you may think, the clitoris is nothing at all like a tiny penis."

"When you touch this precious gem, make sure your hands are clean and fingernails trimmed. Take your hands and approach it with the same tenderness as if you were to delicately lift a ladybug off an octogenarian nun’s habit ... Sometimes the best area of the epicenter is slightly off to one side or the other (still on it, just not directly on it, we collectively beg you).”

“Fingers take nothing away from what you will soon provide for her with your dick."

But fingers "give you a fair test of your woman’s natural viscosity levels. Simply, wetness is confirmation that she’s into it… If she isn’t wet enough and she’s telling you she’s into it, that she’s all ready, she’s a liar. You simply haven’t done enough to get her going, or she’s just not into you. The vagina never tells lies, that sweet thing.”

Oral Is Not Optional

“So much of sex for women is mental."

"Sometimes women’s body insecurities or inhibitions won’t allow them to relax. Here is where you come in. When you get down there, your face right up on her, as an overall tonal note, you must behave as if her vagina is the greatest thing you’ve ever smelled, tasted, and had the privilege to be near. She must believe that she is letting you ear the Cinnabon that is attached to her body.”

What Is With This Jackhammering Stuff? Stop It.

“Focus only on making her come so she mistakes you for a man who cares. Then, afterwards, do whatever the hell you want."

"Sure, you should f*ck her, but the absence of fucking her leaves her in a state of wanting, which is almost as pleasurable…It can’t just be ram-ram-ram-pound-pound-pound, although I’m sure that’s fun, too, but it’s also the art of the tease. Don’t just jam it on up there — go gradually.”

“Head space is such a key area of sexual connectivity with women.”

"Talk dirty. Set the stage. Force her to pay attention to what’s actually happening right now in the moment. Allay her insecurities. Put her in a different head space than where she is now.”

Unlearn What the Movies Taught About Tongues

“Get your tongues out of our ears.”

“Women’s favorite foreplay is being listened to.”

"The key to the vagina kingdom is: Don't fix. Just listen. This is so difficult, but it is so essential. Think of your penis not as a screwdriver, but as a microphone. Yes, we like sex (actually, we love it!), but if we have bad feelings, you won't get laid."

More like this
16 Novels That Paint A Realistic Portrait Of Abortion
By K.W. Colyard
Aesop's Queer Library Is Open
By Tomi Otekunrin
GIRLI & Q Fell In Love At A Skatepark & Never Looked Back
By Jessica Morgan
Daryl McCormack On His Unusual First Audition With Emma Thompson
By Olivia-Anne Cleary
Get Even More From Bustle — Sign Up For The Newsletter