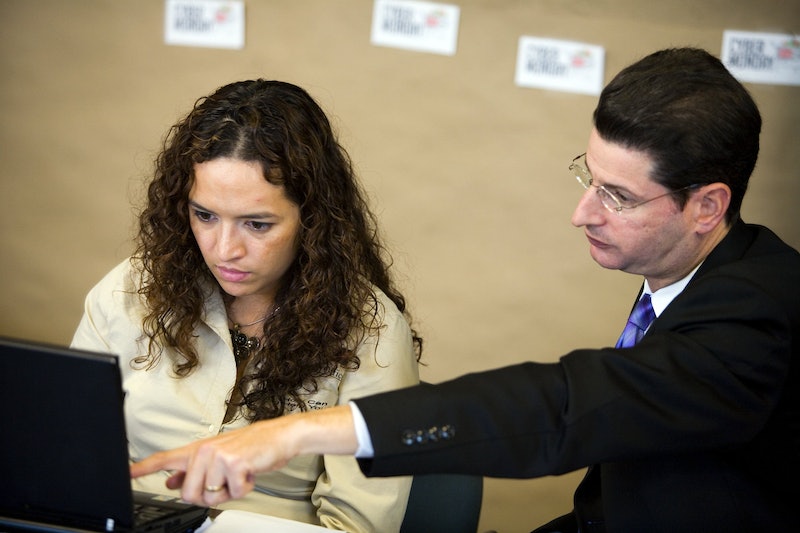 Portmanteaus like “mansplaining” and “manterrupting” may seem rather silly—trendy terms that make good twitter hashtags, but that will eventually fade right along with “YOLO” and “fleek.” But these words describe a problem that is enduring and very real: The phenomenon of a woman explaining something, only to have a man interrupt needlessly or even take the woman’s idea as his and run with it. The new GenderTimer app tracks just how often men and women speak in the workplace, and the results of it are illuminating.

Studies have shown that in conversation women are interrupted more often than men are (by both men and women), and when they do speak frequently, they are often perceived negatively for it. In a January New York Times article about how women speak (or do not speak) in the workplace, Sheryl Sandberg and Adam Grant write,

When a woman speaks in a professional setting, she walks a tightrope. Either she’s barely heard or she’s judged as too aggressive. When a man says virtually the same thing, heads nod in appreciation for his fine idea. As a result, women often decide that saying less is more.

Although there is no easy fix for the fact that women speak less than men at work, GenderTimer seeks to raise awareness of the unconscious gender biases that plague workplace conversations. Developed by Swedish duo Fredrik Eklöf and Andreas Bhagwani, GenderTimer allows people to track how often men and women speak at the workplace, as well as in television, films, lectures, and conferences. According to the app’s website,

GenderTimer promotes gender awareness in social groups and workplaces. GenderTimer shows you clearly who is talking the most, men or women and helps you see and discuss normative gender patterns. Just seeing the numbers helps people self-regulate, and improve.

One downside to the app is that users have to manually record when people are talking. In order to remedy the problem, Eklöf and Bhagwani are running a Kickstarter campaign that would pay for a voice recognition function to be added to the app. They claim that, once in place, the voice recognition would be able to detect male and female voices with an accuracy of 85 to 95%.

Of course, the problem with gender discrepancies in workplace conversations is not simply a matter of having women speak more. Studies have shown that women who do speak up are often perceived negatively, or their contributions aren’t acknowledged. (This, in turn, leads many women to hold back, which only reinforces the problem). For example, a 2012 study by Yale psychologist Victoria L. Brescoll evaluated how employees perceived male executives who speak more than their peers vs. how they perceive female execs who speak more than their peers. Male and female employees both rated the talkative male execs as 10 percent more competent than those less talkative, while male and female employees evaluated female executives who spoke more frequently than their peers as 14 percent less competent. It’s easy to say that women should speak up more at work, but it’s hard to put that into practice when women are perceived as less competent as a result.

Sandberg and Grant argue that the real solution to what she describes as “the double bind of speaking while female” is to get more women into leadership positions. With more exposure to female leadership, people will simply become more accustomed to hearing—and listening to—women in professional environments. But although the GenderTimer app may not fix gender discrepancies in conversation and perception in the workplace, it may function as an effective first step in making people aware that such discrepancies exist. Simply showing people in concrete terms that “manterrupting” is a real problem may help to make them more mindful of how they might be contributing, even unconsciously, to gender biases at work.

GenderTimer is available on the web and as an app for Android and iPhone. Find out more here.