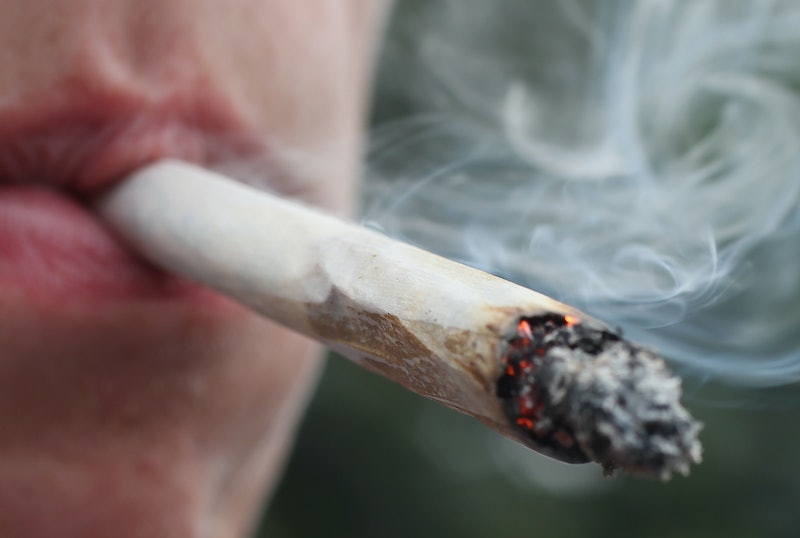 When a Texas House committee voted to make marijuana legal in one of the country's reddest states, it became slightly more likely that weed could become legal in Texas . It's a piece of legislation that was proposed by a Tea Party Republican (who the Dallas Morning News describes as "conservative"). In fact, shortly after Rep. David Simpson of Longview filed the bill earlier this year, he wrote an opinion piece for The Texas Tribune titled "The Christian Case for Drug Law Reform," and wrote that "I don't believe that when God made marijuana he made a mistake that government needs to fix." Texas House Bill 2165 would decriminalize possession and delivery of marijuana starting this September, though sales to those under age 18 would not be allowed, according to The Texas Tribune.

The bill passed the Texas House Criminal Jurisprudence Committee (even committee names are bigger in Texas, y'all), by a vote of 5-2, the Associated Press reported, with two Republicans and three Democrats voting in support. If it passed, Texas would join Alaska, Colorado, Washington, and Washington D.C. as places where recreational pot is legal, and a host of other states that allow its medicinal use.

However, don't break out the bongs just yet, fans of the toke in Texas, because it is highly unlikely that this bill will advance any further during the current legislative session, according to the Dallas Morning News. State leaders are not in favor of the legalization plan, and in addition, there is not much time left in the current session on Texas' legislative calendar. Normally, once a House committee approves a bill, it then goes to the Calendars committee, where it moves to the full House for consideration. But a peek at the Texas House calendar for the next few days shows no sign of HB 2165.

Even supporters of the bill are realistic about its unlikely chances this time around, but they also expressed optimism that decriminalizing marijuana was getting any attention in Texas at all. Heather Fazio of the Marijuana Policy Project told KSAT-TV that "marijuana prohibition’s days are numbered in the Lone Star State." Fazio said continuing to enforce anti-pot laws was a "waste of law enforcement resources," and perhaps more compelling to Texans, "an affront to individual liberty."