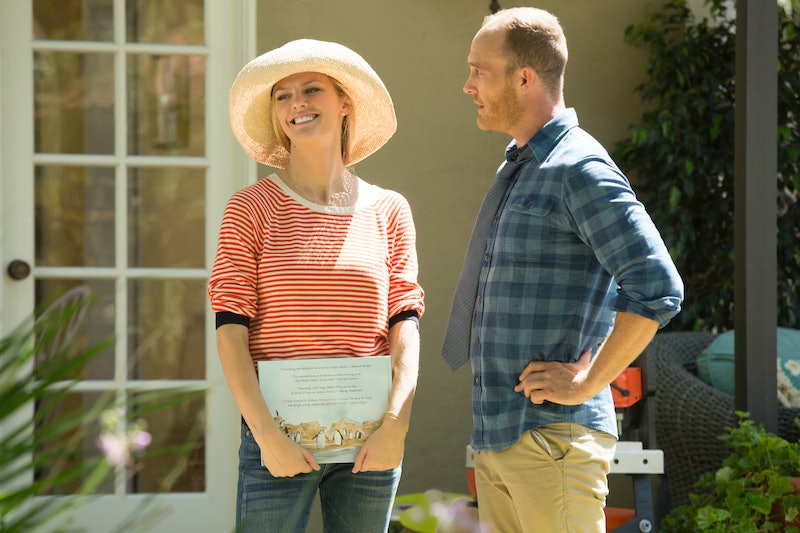 While the new Jane Fonda and Lily Tomlin-starring Netflix series Grace and Frankie puts the heavy focus on the titular women finding out how to live their new lives after their husbands announce they are gay and have been having an affair together for 20 years, the side stories of each couples' offspring add depth to the families — it also quickly shows us how connected these families really are. The funny back-and-forth between Frankie's son Nwabudike and Grace's daughter Briana is certainly entertaining to watch, but it's the mysterious past between Frankie's son Coyote (who's fresh out of rehab) and Grace's daughter Mallory (who's painted as a busy soccer mom) that's really interesting. A few episodes in we see that Coyote had a past drunken incident in Mallory's lawn, which suggests that they once had feelings for one another. All that's left to do is wonder what happened between Coyote and Mallory.

Before his rehab stint, Coyote apparently went on quite the bender, dipping heavily into alcohol and drugs, which led to him to mow down Mallory's mailbox in his car and yell to Mallory that she shouldn't marry Mitch. "It doesn't have to be me, just don't marry Mitch," are Coyote's exact words, according to Mallory. However, by this time Mallory had already been married for seven years and has kids with Mitch. Obviously Coyote had problems and needed to go to rehab to sort out his life, but this kind of outburst simply doesn't come out of nowhere.

The series drops hints that they were at least together for a short time. In Episode 10, "The Elevator," we get a small glimpse into everyone's lives before Robert and Sol's announcement. Mallory is pregnant with her second kid; Coyote is friends with Mallory and Mitch and hasn't yet gone to rehab; and everyone is spending the labor day weekend together at the joint beach house. While Coyote is high, he talks to Mallory about the "fun summer" they spent together and asks her if she could imagine him with a nine-year-old. That's when she tells him she's worried about him. Clearly there was something between these two, maybe it was just that they drunkenly hooked up a few times one summer and Coyote fell for Mallory but she didn't feel the same way. Or maybe it's more.

What if Mallory and Coyote had fallen for one another and spend a summer together secretly. But Coyote was all about being the life of the party and drinking. So she knew he wasn't ready for an actual relationship and went looking for someone who was: Mitch. What she didn't realize is that Coyote's feelings for Mallory were stronger than he led on or wanted to admit. What if the situation goes even deeper? What if Mallory and Coyote were thinking about getting more serious until Mallory had a pregnancy scare and she realized that Coyote couldn't commit to her in the way she wanted? So she walks away from their amazing summer together and tells Coyote no harm no foul.

Either way their tense relationship at the start of the series shows that something happened between Coyote and Mallory to make him go all "Stanley Kowalski" on her front lawn as Briana so eloquently puts it. Even if the duo are civil thanks to becoming step people soon, the secret is bound to come out soon enough.