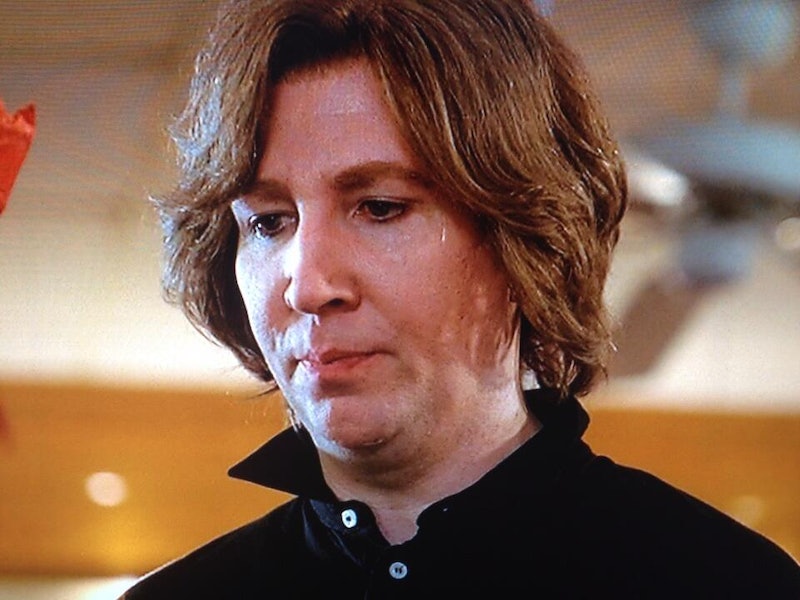 Quick, ignore the headline! It's trivia time! Sunday night's episode of Eastbound & Down featured a very special cameo from a huge, well-known musician — but he looked nothing like the way we're accustomed to seeing him, so it may have been a bit difficult to figure out exactly who he was. Take a look at him in the episode up there, in a screencap courtesy of the New York Times' Dave Itzkoff on Twitter: He looks like a regular joe, not recognizable as anyone famous in the least.

So, who is this guy? I feel like the Jeopardy theme should be playing here, or at least Alex Trebek should be staring everyone down through the screen.

Get ready for your mind to be blown: That up there is none other than the heart-shaped glasses-loving rocker Marilyn Manson , sans his usual make-up and hair. Don't feel bad if you didn't get this one — it was pretty tough, even I had to stare for a while to really understand who I was looking at. The hair! The hair!

Manson appeared on last night's ep of Eastbound & Down on HBO as a server at a roller rink that Kenny Powers is hanging out in. He wasn't there for long, but it was a pretty memorable appearance — you can't see it in the above photo, but he was wearing bright yellow shorts in the scene. Luckily you can see them in this video below, though! TMZ is a wonderful thing, sometimes.