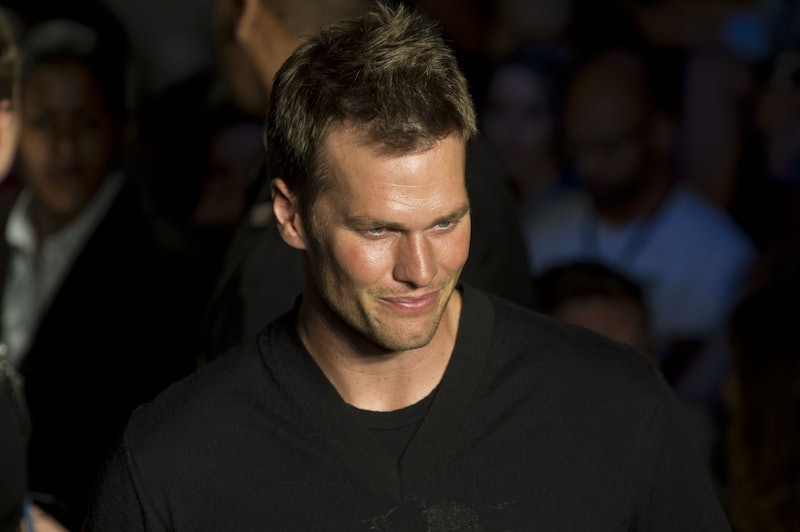 More than a full day after investigators released the report claiming that the Patriots "likely" deflated footballs for the AFC Championship game in January that led them to the Super Bowl, Tom Brady finally spoke about Deflategate, but tried to sidestep actually commenting on the scandal. The report by lawyer Ted Wells alleged that Brady was "at least generally aware of the inappropriate activities" of the two Patriots employees who he believes deflated footballs in order to win the championship game.

When Brady spoke at Salem State University in Salem, Massachusetts Thursday night, his interviewer, journalist Jim Gray, asked Brady multiple questions about Deflategate, all of which Brady masterfully avoided answering. Brady basically said that he'll fully respond to the scandal at a later date, but when that day comes, he needs to give a complete answer as to whether or not he knew about the cheating.

When asked about his reaction to the Deflategate report Thursday, Brady said: "I don't really have any reaction. Our owner commented on it yesterday. It's only been 30 hours so I haven't had much time to digest it fully, but when I do, I'll be sure to let you know how I feel about it."

It's a little hard to believe that Brady has absolutely no reaction to allegations that he knew Patriots employees were helping him and his teammates cheat. When Gray asked when he would publicly respond, Brady said: "Hopefully soon. There's still a process that's going forth right now and I'm involved in that process and whenever it happens, it happens. And I'll certainly want to be comfortable with the statements that I make."

See what I mean about the sidestepping of questions?

Brady said the scandal didn't take away from his Super Bowl win. When asked if he cares what people are saying about him, Brady said:

I think as a human you care what people think. I certainly care what the people who are close to me think and what they care about. I think as a public figure, you learn that not everyone's going to like you — Good, bad, indifferent — there's a lot of people who don't like Tom Brady and I'm OK with that. I have teammates that I love and support — that love and support me. I have fans. I have family. I'm very blessed.

Brady's agent, Don Yee, released a statement Thursday morning that called the report a "terrible disappointment" and alleges that it was a "sting operation" between the Colts and Wells. The statement calls on Wells to release all the information and testimonies, including Brady's, from the investigation to the public so people can draw their own conclusions. Back in January when Brady was fielding questions about Deflategate, he said, "I have no knowledge of anything. I have no knowledge of any wrongdoing. I’m very comfortable saying that. I think there’s a lot of people who have more information than me," and then added, "I have questions, too."

Brady's public statement, when he finally decides to make one, should conclusively say whether or not he was aware of any deflating, not just that he has "no knowledge of anything." He should also join Yee in asking for his testimony to be made public if he has nothing to hide. It will be much easier for America to trust his official testimony rather than one public comment he'll make when he feels ready.