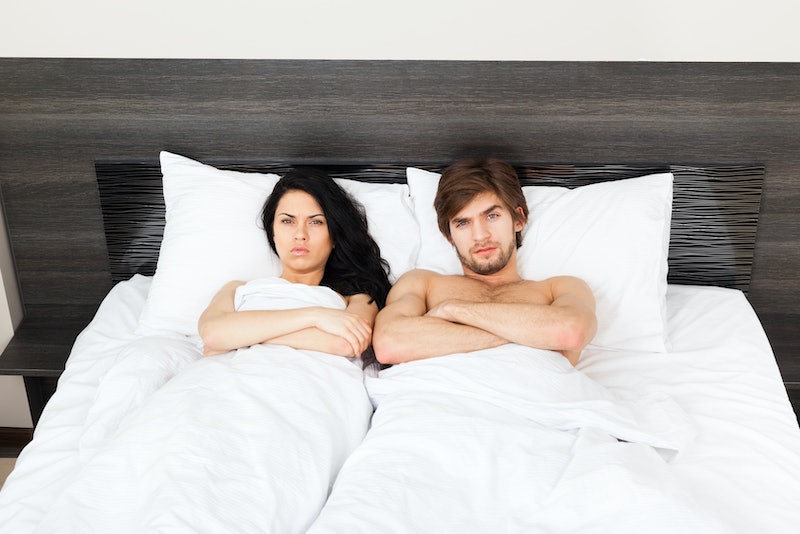 Often, when people start worrying that a partner is cheating on them, they are told that they're being paranoid, or jealous, or crazy, or clingy, and it’s their concerns that are endangering the relationship, not infidelity. And sometimes, that’s absolutely true. Relationships have to be built on trust, and if you’re constantly obsessing about your partner cheating, then you’re not allowing that trust to happen. The only way that relationships can last in the long term is if we let our partners have the independence that everyone deserves.

But the unfortunate truth is that some people do cheat. In fact, according to NBC News, about “one in five adults in monogamous relationships, or 22 percent, has cheated on their current partner.” So sometimes, people are not just being paranoid or jealous when they suspect cheating — sometimes they simply suspect what happens to be absolutely true. But how can you know? Every relationship is different, so there’s no “You’re Being Cheated On” equation. However, there are certain signs that may indicate that there’s more going one behind closed doors than there first appears.

Below, you’ll find six signs that your S.O. might be cheating on you. But first, let me say this: None of these signs on their own — or even all of them together — mean that your partner is cheating. Your S.O. could tick every one of these boxes, and he or she might be a perfectly faithful partner. These are simply signs — gathered from studies, surveys, and common sense — that you may want to look around you, pay attention, and ask some real questions about the state of your relationship.

1. Your Partner’s Tone Of Voice Changes On The Phone

A study from Albright College found that people alter their voices when speaking to people with whom they are romantically involved on the phone (men tend to speak to female partners in a higher-than-normal tone of voice, while women tend to speak in a lower pitch to male partners). So if your partner starts laying on the seduction with someone other than you on the phone, you might need to start paying attention.

2. Your Partner Obsessively Guards His Or Her Phone And Email

This is a difficult one, because I firmly believe that people in LTRs deserve their privacy. No matter how close you are to your partner, you do not have the right to police his or her phone and email, nor should you have automatic access to his or her passwords. But if your partner starts going to a lot of effort to keep his or her phone away from you — taking it into the bathroom, freaking out if you try to use it to check the weather, refusing to answer it while you’re in the room — then that may be a sign that something’s up.

3. Spending Too Much Time On Social Media

A 2014 study by Russell B. Clayton at University of Missouri-Columbia studied the effect of Twitter use on relationships. The study concluded that “active Twitter use leads to greater amounts of Twitter-related conflict among romantic partners, which in turn leads to infidelity, breakup, and divorce.” That isn’t to say that anyone who uses Twitter is going to cheat, or that Twitter causes cheating. The study simply shows that excessive Twitter use causes fighting, which then leads to other relationship problems. But if you’re S.O. is constantly on social media — Twitter, Facebook, whatever — it may be a signal that he or she is no longer investing time and energy into your relationship.

4. He Drinks Guinness, Or She Shops At Banana Republic

A UK-based dating site for married people looking to cheat found in a survey that Audis were the most popular cars among its members. The site also found that Guinness was its male members’ favorite beer. A survey by cheating site Ashley Madison found that its female members preferred shopping at Banana Republic and Chico’s. So what do these findings mean?

Not much, in my opinion. I think these surveys show that people who cheat are regular adult humans who drive cars, drink beer, and shop. They are a good reminder that there is no set “type” of unfaithful person (just as there is no set type of faithful person), and that each relationship is different. Don’t look to these types of “clues” to figure out if your partner is cheating. Instead, look to what is actually going on in your relationship.

5. Your Relationship Has Suddenly Changed

One of the biggest signs that someone may be cheating is a sudden, major change in your relationship. Only you know what is normal for you and your partner. But if they way you both connect, emotionally or sexually, shifts dramatically and for seemingly no reason, then it may indicate that something is happening of which you are not aware (like infidelity). Time to sit down and have a real discussion about what’s going on.

A 2014 study out of Brigham Young University showed that intuition is a powerful thing. In the study, psychologists asked 35 women and 16 men to discuss their relationships with their significant others and their histories with infidelity. Researchers also filmed the subjects interacting with their SOs. They then asked third-party observers to assess whether the participants had ever cheated. Their assessments were surprisingly accurate, suggesting that our instincts are more reliable than we might expect. That’s not to say that you should run out and accuse your partner of cheating without evidence. But if you have a persistent, deep feeling that your partner is cheating, don’t ignore it. Consider seriously where you think that feeling is coming from, and talk to your partner about your concerns.

More like this
Think Your Partner Is Cheating? These Tarot Cards May Confirm Your Suspicions
By Kristine Fellizar
10 Ways To Be More Empathetic To Your Partner
By Raven Ishak and Lexi Inks
The 19 Best Tweets & Memes About Bisexual Awareness Week
By Lexi Inks
How To Politely Reject Someone Who Keeps Asking You Out
By Laken Howard and Lexi Inks
Get Even More From Bustle — Sign Up For The Newsletter