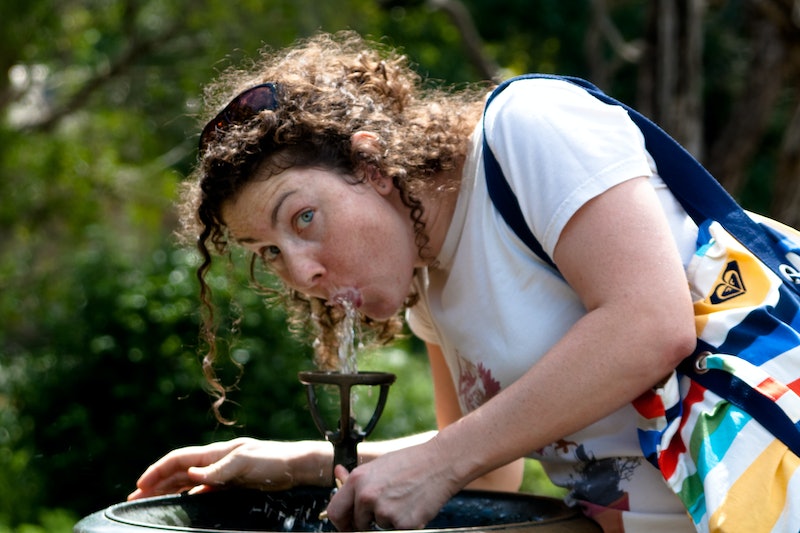 Remember the horrifying tale of a woman who didn't wash off her makeup for a month and aged ten years? We found that poor soul's polar opposite — but don't worry, this tale has a really happy ending. Sarah Smith, a 42-year-old woman from the U.K., was told by both her neurologist and her nutritionist that she needed to up her water intake, so she decided to drink three liters of water every day for a month. (U.S. readers, that's about three-fourths of a gallon, or six water bottles.) Smith stuck to her liquid regime through terrible train bathrooms and cravings for tea, and at the end of the month she looked ten years younger.

Before starting her experiment, Smith was only drinking about two cups of water a day, plus a cup of tea in the morning. She complained of constant headaches, "sluggish bowels," and poor digestion, but that's just the internal stuff — she was equally unhappy in the looks department. Her lips were shriveled, her skin was lackluster, and she felt that she looked about 52 years old.

Cue the Cinderella ending: By the conclusion of her experiment, Smith's skin felt more elastic, she'd lost an inch around her waist, the cellulite on her thighs vanished, her headaches were gone, and she felt lean and fit. Is this real life?

Maybe not. In response to this seeming miracle, otherwise known as the world's easiest anti-aging plan, ABC did a segment on her story in which Dr. Richard Besser, their chief health and medical editor, confirmed that dehydration does lead to skin problems such as sunken eyes, dry skin, and loss of elasticity, all of which make a person look older. However, Besser was skeptical about the time-reversal effects of major hydration. "If you're not dehydrated and you drink a lot of extra water," he said, "it's just going to send you to the bathroom." He also pointed out that if you don't feel thirsty, you're probably not dehydrated, especially not to the point where "you're gonna be pulling the water from your tissues."

According to University of Wisconsin Health, "The unfortunate truth ... is that water will reach all the other organs before it reaches the skin." In other words, water is no substitute for moisturizer — you can't necessarily drink your way into skin with a serum-esque glow.

But like many natural beauty solutions that rely mostly on anecdotal evidence, there's no downside to upping your water intake. (Unless you drink too much and die. It's called "water intoxication.") Mrs. Smith was ecstatic with the results from her month of H2O consumption, and chances are we all could use a little extra water in our lives, too — especially those of us who drink a lot of coffee, soda, or alcohol. Caffeine and alcohol are diuretics, meaning they promote urine, which can lead to dehydration if you're not replacing those lost fluids.

Water may not give you a productive buzz or cause you to dance on table tops, but it doesn't have to be the most boring thing you've ever experienced. Invest in a Bkr, the amazingly hip, FDA approved, BPA- and phthalate-free water bottle that designers go crazy over (probably because of the sleek construction and the seemingly endless color options) — that way, you don't have to trail plastic water bottles all over town.

And discover the world of homemade flavored water, which is full of small miracles like cinnamon water, cucumber water, herb water, or anything involving citrus. Yes, water can actually taste good. Fairy tales do come true.