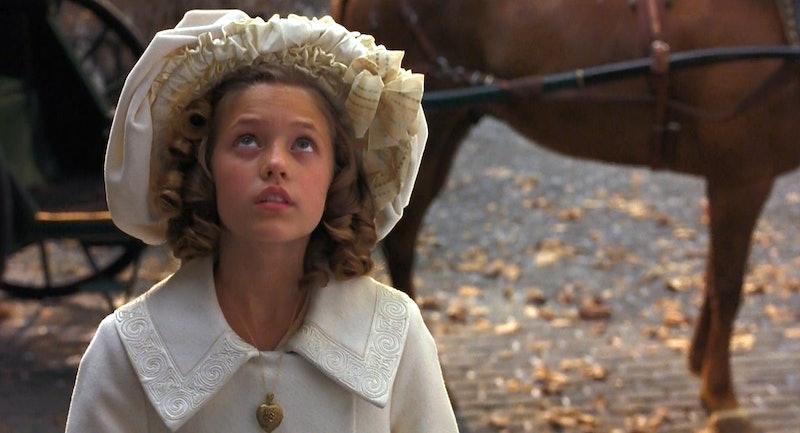 On May 10th, 1995, audiences' hearts were ripped to shreds by a remake of the 1939 Shirley Temple classic (which in itself was based the 1905 book of the same name by Frances Hodgson Burnett) A Little Princess, directed by the now-famous Alfonso Cuarón. Cuarón would later make a name for himself with Children of Men and win the Best Director Oscar for Gravity, but you may also remember him for being the first director to give the Harry Potter movies a darker tone with Prisoner of Azkaban. Indeed, his ability to navigate the complicated emotional territory of adolescence is on full display in A Little Princess, and he enters the realm of a World War I-era girls boarding school with profound delicacy.

This movie was regular viewing in my childhood, which is weird looking back because I distinctly remember sobbing uncontrollably every time I watched the ending. Maybe I just loved the magical realism, or maybe I was a masochist for the tears , but A Little Princess is burned forever into my psyche. How, then, would I react to the film 15 years later as a full grown adult?

First, the plot. Like many '90s movies, A Little Princess centers on a super rich white girl named Sara. Sara is the daughter to a wealthy bureaucrat, and is blissfully living in India without a care in the world. Her mother died when she was very young, but mostly she has everything a child could possibly dream of: very few restrictions on her behavior, giant elephant fountains, and a father who teaches her that "all little girls are princesses." When he volunteers to fight in the war for the British army, however, Sara is ripped from her home and placed in an uptight British boarding school that's run by the unbelievably foul headmistress, Miss Minchin. Fortunately, her uber-rich father has made sure Sara gets the hook-up (biggest suite, millions of toys), and Miss Minchin is happy to take his money — so all seems well, at first.

Things take a turn for the absurdly tragic, however, when her father is mistakenly identified as killed-in-action, and the British government seizes all of his assets. Realizing she can no longer extort the man for money, Miss Minchin strips Sara of her possessions and her fancy room, and makes her work as a servant who lives in the attic with another servant Becky (although I don't know if "servant" is the right word when there's literally no pay involved and THEY'RE CHILDREN).

In the meantime, through a series of grand coincidences, Sara's father is found with amnesia in a military hospital and brought to live literally NEXT DOOR TO THE BOARDING SCHOOL.

Miss Minchin, who seems to have legitimately hated Sara since they first met, tries to spitefully abuse Sara's joy and hope out of her. Once she discovers Sara and Becky with what appear to be stolen food, all bets are off: she flies off the handle and calls the cops to have both 8 year olds arrested. When the cops arrive, Sara escapes to the house next door and stumbles upon a wounded soldier. When she realizes it's her dad, she begs him to save her, but — oh no — he doesn't remember her.

Miss Minchin and the cops break into the room; Sara tries to explain that this is her father, but Minchin tells the cops her father is dead even though she recognizes him immediately because that's how terrible a person she is. As they're dragging Sara away, her dad's memory finally returns, and there isn't a dry eye in the house. They get their money back, adopt Becky, take over the boarding school, and live happily ever after in India while Miss Minchin becomes a chimney sweeper.

Spoiler alert: I sobbed when I rewatched this film, and I teared up just now in recapping the climax. With that said, lets dry our eyes, look back at A Little Princess, and ask the important questions: what parts hold up, what's weird in hindsight, and what's atrocious to the modern eye?

Miss Minchin Is Still The Most Despicable Villain Ever

Oh my God, what is wrong with this woman? She's literally the worst. Why are you running a boarding school if you hate children this much?

Sara can be a little too precocious throughout the movie (we get it, Sara, you speak French), but actress Liesel Matthews brought a nearly bottomless wealth of emotion to the part — and every time she begs her father to remember her, my bones tingle with agony.

I totally forgot that about 25 percent of the movie is set in Sara's imagination. The fairy tales about India she shares with the other girls speak palpably to the emotional lives of the characters in ways that are as endearing as they are tear-inducing.

Lavinia is that kind of '90s popular girl who hates the lead character for no reason and repeatedly does laughably absurd things to bully her. When we first see her, she dips a little girl's hair in ink just to show Sara who's boss, even though they've literally said nothing to each other yet. Could somebody discipline this child, please?

Her punishment is that she becomes a chimney sweep? Are you kidding me? This woman extorted a WWI veteran for a ton of money, then mentally and physically abused his daughter when she thought he was dead, then lied to the police about him being ALIVE AND IN THE ROOM so she could send that little girl to jail for a crime she didn't commit. Miss Minchin is a dangerous sociopath who should be behind bars until the day she dies.

WHAT'S ATROCIOUS TO THE MODERN EYE

The Way They Talk About/Portray India

"A very long time ago, there lived a beautiful princess, in a mystical land known as... India..." I understand that the movie is told through the perspective of a little girl, but that little girl's father is an extremely wealthy member of an imperialist nation who was living in India as a result of colonization. Sure, she thinks of India as home, but that in itself is problematic because what she loves about it is its exoticism. This doesn't take away tremendously from the emotional impact of the movie, but it does make it obvious that the dialogue about cultural appropriation wasn't quite the same in the '90s.