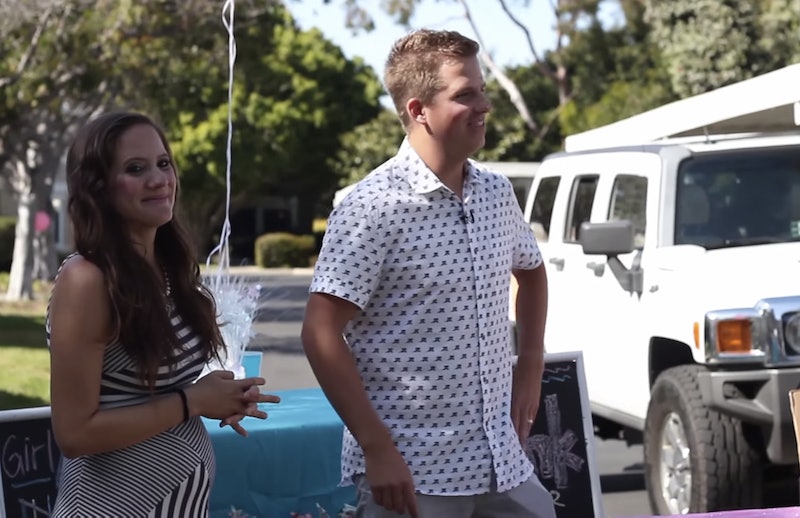 Everything about having a baby has become a thing. How to tell your friends and family you're pregnant. How to reveal the gender. How to reveal you've given birth. How to document your child's growth over the days/weeks/years in a really adorable, YouTube or Instagram compatible way. Well, the Fortins have also figured out how to shock their loved ones with the news that what everyone thought was twins was actually triplets.

Desiree and Ryan Fortin struggled with fertility issues before becoming pregnant via IVF. After the embryo transfer, one split, resulting in identical twins and a fraternal triplet. They told everyone they were having twins, but at their gender reveal party (which seriously looks bigger than some weddings I've been to), after they announced that Baby 1 and Baby 2 were both boys, they brought out a third box to the delight and shock of all present. (Well, everyone except for this one little girl right up front, who hilariously looks like she could not care any less about what was going on if she tried. She's like "Whatever. Is there more cake?")

I completely fail in the adorable announcement department. I told my mom I was pregnant sniveling and in tears on my way to the doctor's after a pregnancy test unexpectedly came up positive. (I told my husband with my pants still around my ankles after just having taken said pregnancy test.) I didn't even announce my first pregnancy on Facebook, I just started posting pictures where I was obviously pregnant and people figured it out. Looking back I didn't even announce my son's birth. I posted about getting my first smart phone, but not the birth of my first child. (In retrospect, I think I was determined not to be "that mom on Facebook" that only posts boring crap about her kids.) For my daughter, I just wrote "I'm pregnant' with a GIF of Kanye dropping a mic. So I'll admit, grand gestures like this aren't my thing, but seeing how incredibly happy the Fortins are and knowing what a long and difficult road they had to travel to have babies in the first place, I'm glad it's theirs and that they were able to have such a special moment with their family and friends (and now, more than 2,000,000 people on the Internet).

Congratulations, guys! Share in their moment with the video below.