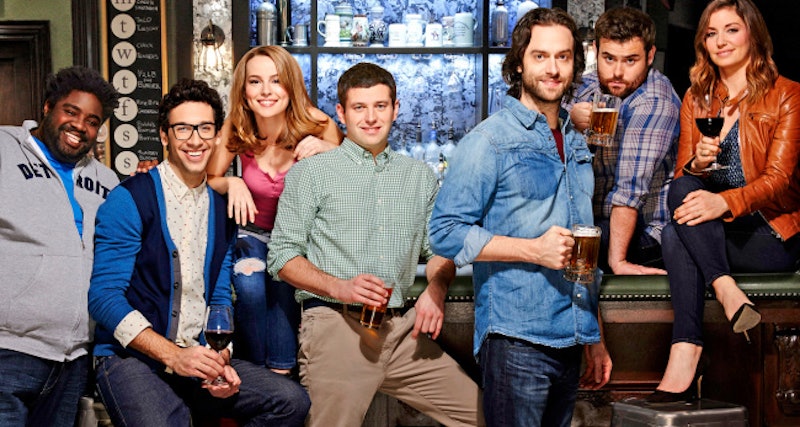 When it comes to making a successful sitcom, the formula seems mysterious to the point of near magic, making it difficult for plenty of great shows to really make their marks. One series that has emerged from the smoke as a highlight of primetime has definitely got to be NBC's Undateable, a multi-camera sitcom currently in its second season. The show follows a group of male friends, all of whom have their own particular personality quirks that keep them from forming lasting and successful relationships with women. While the premise might seem rather basic, its relatable — not to mention the extensive celebrity cameos, I presume — has made it an unlikely success, so much so that NBC ordered a third season of Undateable ... and, according to Deadline, it might all be live.

Say WHAT?! Yeah, that's right. As Deadline reports, NBC might be making an unprecedented decision in choosing to have Undateable move forward with not just one live episode (an experience not attempted by many casts, and certainly not so early on in its run) but a full season of them. Season 2 was comprised of 10 episodes, so it may be fair to expect the same in Season 3, though a spike in ratings like NBC experienced after the show aired their first live episode earlier this month could lead them to expand the season. That remains to be seen, but audiences — and I'm sure the network, as well — remain hopeful.

NBC has had a tough time of things when it comes to finding a successful and long-lasting comedy series in the past few years. With Parks & Recreation over, and other sitcoms failing to make their mark, execs recently decided to cancel all of their comedy series besides Undateable , which is a sure sign that they really want this thing to work. It seems to be working, for now at least, though it's one thing to see a bump in ratings — and a modest one, at that — after a single live episode and another to pin an entire season's hopes on that format.

I can't help but be reminded of 30 Rock, which attempted the live episode format during Season 5 of its seven season run. The episode, aptly titled "Live Show," was an experiment for showrunners, and it was a risk that paid off: "Live Show" was the highest rated episode of the season, bringing in 6.7 million viewers — a pretty impressive figure for any show, let alone one that was largely a critical darling but failed to bring in huge viewership numbers.

However, 30 Rock never repeated the formula for the remainder of its years on air, and whether or not that was a smart move is unknown. Could the success of the series have been amped up by a continual live format, or would the charm of such unpredictability eventually wear off? We may finally have a chance to answer that question during Undateable's third season, it seems.

More like this
'The Undeclared War' Took Inspiration From This Gavin & Stacey Location
By Maxine Harrison
Where Was 'Only Murders In The Building' Filmed? The Arconia Has A Different Name IRL
By Radhika Menon
Everything You Need To Remember Before Westworld Season 4
By Brad Witter
Everything To Know About 'The Undeclared War' Season 2
By Rachel Mantock
Get Even More From Bustle — Sign Up For The Newsletter