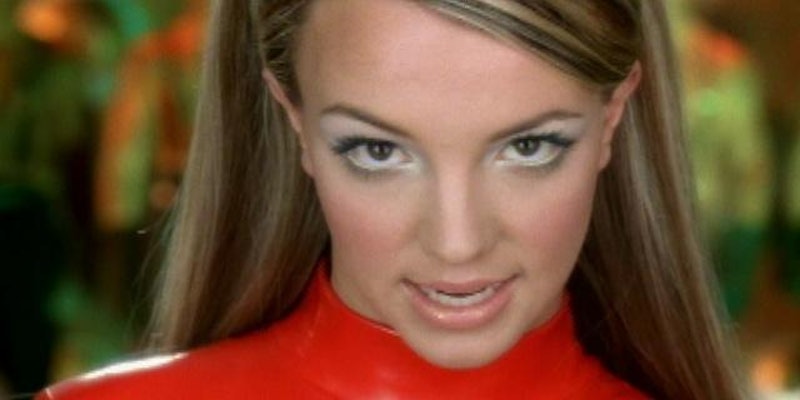 One would assume that I wouldn't be fit to judge Britney Spears and her stellar sophomore album Oops...I Did It Again, considering I'm like digital journalism's Daria Morgendorffer. But rest assured before I left for gothier pastures, the pastures that I currently graze today, I was as obsessed with the blonde tour de force as everyone else. Like, I memorized that weird heartbeat dance move for my swim club's pre-teen party, rest assured. So as we reach the album's 15th anniversary, we should reflect on the tracks that remind us so deeply of elementary school.. and, objectively, which ones suck.

Them's fighting words, I know, but they must be said. While the vast majority of us were probably Britney fans in our youth, many more of us haven't actively listened to the album in years. So at risk of my street cred, I took a second listen to Oops I Did It Again to judge each track accordingly.

I put a lot of thoughtful consideration into this list, but some people will undoubtedly be outraged. To them I say, don't take this too seriously and hate tweet me, because after this I'm immediately going back to Nine Inch Nails. Otherwise, enjoy!

"Where Are You Now" is honestly a song I heard and though, "Wait, was this even on the 'Oops...I Did It Again'"? In truth, pretty much the entire latter half of the album (and the first half of this list) is comprised of songs like that. This one wins the lowest ranking spot, though, for the line “where is your heart when I’m not around.”

Not memorable. A snooze fest. Also kind of bullshit. No girl relishes when her boyfriend's eyes says that he loves her. She wants the verbal declaration and two or three emoji-filled posts on Instagram... daily.

Decidedly not great, but ranked better because I kind of remember the intro. And, subsequently, pressing the rewind button on my walkman to get back to the good stuff.

Now we can start the party. "Can't Make You Love Me" has a killer hook with the "I'm just a girl with a crush on you" opener, and it subsequently closes each of the perfectly decent choruses. HOWEVER all the stuff in the middle is pretty bland.

As far as lyrics go, plus 10 points for addressing that even in the midst of fame, wealth, and success, there's always that one guy you're sickly hung up on. Minus 100 points for setting feminism back a century.

For the record, I do remember the album's closer, "Dear Diary." It's one of the few songs that Britney wrote. And by "wrote" I mean, I'm pretty sure that two guys literally reworked pages from her actual childhood diary.

I say this because the song is impressive on a second grade level.

Does she open this with an auto-tuned "Don't go knock my door?" Ugh, so stupid...

Not so horrible compared to all the previous songs, though, partially because its message is more about empowering than pining and whining. At the end of the day "Don't Go Knockin' On My Door" isn't anyone's jam, nobody is deeply psyched when it comes on. But after a few listen, you might get some unconscious shoulder shifting.

Exponentially less cool than how I remember it as a child, probably because I've been spoiled by punk rock and riot grrrl. You know, I know what real dissatisfaction sounds like.

Still gets credit for being a Rolling Stones song.

Oh, girl. I loathe, loooathe the asinine spelling of "you" (just add the two extra letters, oh my god) and the initial riff just sounds like an "Oops... I Did It Again" rip-off. But otherwise? This is, in fact, my jam. I love women who are unapologetic about who they are, I love telling off guys trying to change them, and I even love the little synth violins they plugged in there. Overall, really one of the better songs on the album, and definitely deserves to be in the top five.

I really adored this song as a child, despite making no real resonance to the subject matter. I was like, 9, the only guys I was in love with was Aaron Carter and Trunks from Dragon Ball Z. But anyway.

I'll still vouch that this is a beautiful song and one of the most authentic (well, "authentic") ballads Britney's ever done. It probably helps that it was written by Shania Twain. But it still falls short of the bronze medal, and now we're officially in the big leagues.

Now this song I can still belt out impeccably with a little too much heart. It's just so damn enjoyable, and even a bit ironically sad given Britney's dark years in the mid-2000s. The only thing that ruins it for me is the idea that the Academy Awards would give a Best Actress Oscar to a girl named goddamn Lucky. I think the song could've been great without literally naming the protagonist that.

What can we say? It's an iconic track, and Britney stepping out in that red latex catsuit is a game-changing moment in pop. So why does the titular track not claim the number one spot?

Bottom line? It's really, outrageously dated, with the weird monologue in the middle making no sense to a generation that doesn't remember when Titanic came out. It's hard to tell if this would be a great song if it came out today, without that palpable nostalgia factor. And that's why there's one above it.

Stronger was a phenomenal song in 2000, and it'll be a phenomenal song another 15 years from now. Nothing else truly showcases what a powerhouse Britney was during the Oops... era, proving boldly that her loneliness was no longer killing her anymore. A+