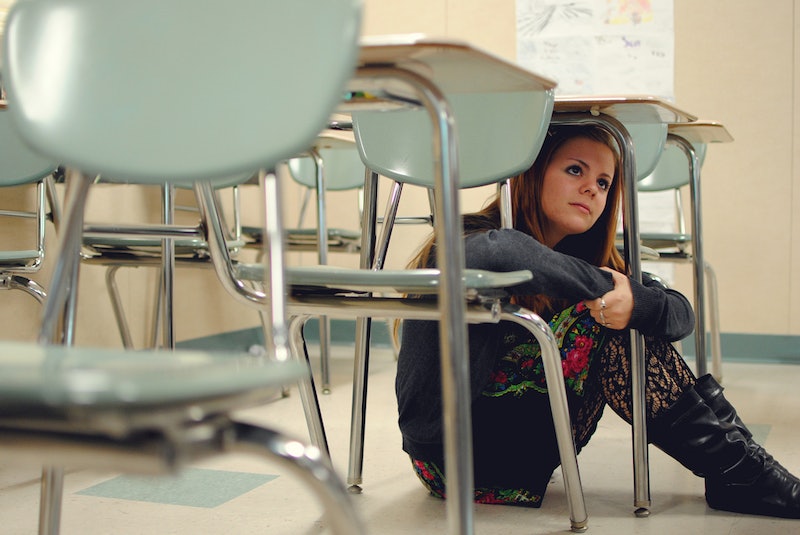 In the year I worked as a public high school teacher, it was my job to police girls’ bodies — and by that I mean I enforced the school dress code. I had to make sure my students' shorts and skirts reached their fingertips when they held their arms straight at their sides, that their jeans did not have rips across the thigh or any other revealing tears, that their shirts were long enough to hide their midriffs. It was my job to send the message to female students that covering up their bodies was an important part of their education, even though no one could explain to them how abiding the dress code had a direct impact on their learning. In fact, following the dress code was so important that, if they refused to put on the humiliatingly over-sized sweatpants and t-shirts we kept on hand for girls whose outfits violated the dress code, they would be sent home.

Before accepting a position at this school, I had taught composition at a college in New York, then spent four years teaching rigorous ESL courses at a university abroad. At both institutions, students called me by my first name and while I was known as a strict teacher, I set the parameters of my own classroom. After I moving to California and engaging in a seemingly endless job search, I found myself at a charter high school with a virtual curriculum provided by a for-profit corporation. Students completed lessons online at their own pace, meeting with teachers a few times a week instead of in daily sessions. I was now not so much a teacher as an “advisor” or “coach,” which were both code words for “disciplinarian.”

Many (though not all) of the students had struggled at other schools for one reason or another, their academic problems often stemming from abuse, neglect or an unstable home life. They had come to our school hoping an alternative curriculum would help them succeed. I had daily heart-to-hearts with my charges and counseled an advisory of senior students that I grew close to over the course of the year. I charted students' academic progress and assisted with assignments while making calls home every day, meeting with parents and sometimes crying over my students’ situations, ducking into the copy room so no one would see my tears.

But my primary task was to keep a room full of hormone-fueled teenagers as docile as possible as they did coursework on laptops that were chained to their desks. If they made too much noise, if they talked or hooted or otherwise engaged in normal social interaction, my colleague and I were the ones who would ultimately be held responsible.

Policing their wardrobe was just one way in which we kept them in line. Other methods of control included an intricate system of rules AND a rewards system culminating in a pizza party each month, all of which was centered around one mission: to keep students quiet and in their seats all day long. They could not get up without permission, including when they needed to use the bathroom. They were expected to refrain from talking or using their phones all day, except for during a few brief breaks. (The school was so small, there was no gym or sports teams. We had no outdoor space, either). No snacks were allowed at their desks and they were allotted only five minutes to move between classrooms.

Compared to being on my feet all day while trying to manage a room of fifty teenagers, controlling what girls wore to school was actually one of the easiest aspects of my job. However, there were many mornings when I saw someone roll in with ripped jeans or a crop top and I wanted to just pretend I hadn’t noticed. Male colleagues would sometimes approach me and point out the offending ensembles, as they felt uncomfortable addressing female students about their attire. I didn’t blame them — there’s something unseemly about telling a teenaged girl that what she is wearing is wrong. It reveals that you’re looking at her closely, that you’re looking at her body, that her body is offensive. I hated this task, resented having to engage students in a conversation about their clothing. The meaninglessness of this rule was just as apparent to me as it was to them, but I could never let on I saw it that way.

I understand the principle behind a dress code. School is meant to prepare you for the world of adulthood, which is full of restrictions regarding “appropriate attire.” But shouldn’t an institute of learning’s job be to challenge stereotypes and the objectification of women’s bodies, rather than perpetuating the relationship between how you look and your value as a person?

How students reacted to being confronted about the dress code reflected their typical interactions with authority. Those who were more passive would protest quietly, then comply, rather than make a scene. Others would yell, complain, and try to make enforcing this rule as difficult as possible for me, perhaps in the hope that I would give up and give in.

It was a show-down over the dress code that led to a particularly unruly student being expelled. This girl balked at the slightest instruction, got into trouble constantly for offenses like yelling, hurtful or inappropriate talk, frequent disruptions, refusing to do her work and generally not being where she was supposed to be. No matter how much attention and scolding she received, it was not enough to contain her outbursts. (Of course it wasn’t. She was in competition with too many other kids for only two adults’ attention). So when that day arrived when I asked her to change her clothes and she refused, her number was up.

As I continued calmly but firmly requesting that she follow the rules, she grew irate, her voice getting louder as she began to pace about the room. Among our students, pacing was often a sign that a violent outburst was on the way. Then, within the hearing range of several other faculty members, she repeatedly threatened to hit me as the other students looked on, unfazed. I didn't have time in that moment to consider whether or not she would actually hurt me. My sole focus was trying to keep the situation in check.

Even though no actual violence had taken place, threatening a staff member still meant she could not remain at the school. Realizing that my interaction with this student had been the straw that broke the camel's back, I felt stunned and sick to my stomach. I knew it wasn't my fault, but I still felt deep-down that I was responsible for yet another door closing on her. Sometimes I wonder what that student felt at the moment. What was it about being asked to cover up her clothes that caused her to feel such rage? Clothing is an expression of individuality, especially for adolescents. Perhaps what she heard when I asked her to change was not "this is what you have to wear" but "this is who you have to be."

The student who was expelled was not the only girl to get worked up over the dress code. A handful of others also got out of their seats and shouted in my general direction while their classmates looked on. Plenty of other restrictions caused them to react the same way. I was accustomed to such outbursts and had to address them, regardless of the specific source of frustration.

I recently saw One Flew Over the Cuckoo’s Nest for the first time and felt a creeping sense of unease as I watched Nurse Ratched’s immovable face while she strictly adhered to the rules, rules, rules. Any public high school teacher can probably identity with her, though she’s not a figure with which anyone wants to be associated. I imagined this was how students had seen me at times: an unfeeling cog in the institution’s machinery, forcing them to be quiet, taking away their phones, catching them at lying and stealing and turning them in.

In truth, there were plenty of times when their behavior angered me, when I wanted them to be punished out of pure frustration over their refusal to follow simple rules. But what the students could never see was the desperate pain I suffered over being an enforcer — pain that came from being unable to ever admit that some of the rules were indeed stupid and unnecessary, that I agreed with the students more often than not when they asked for more freedom, that I was obligated to be the one to deny it to them.

I found my time inside that school to be just as soul-crushing as they did. Just like many of the students, I had wound up there because other options didn't pan out. My concern over the quality and implementation of the curriculum — combined with the corporation providing that curriculum's lack of interest in the students' well-being — made it more challenging for me to put faith in the school's mission, which in turn made enforcing the rules even more painful.

After one school year, my time at that institution came to an end. I attended graduation and wiped away tears when my advisees’ crossed the stage. (What they were wearing under their robes at that moment did not matter). I walked away with many students’ names etched on my hearts, young people with whom I’d made a meaningful connection, who thought I was a “cool teacher” — meaning someone you can trust — despite my role as a disciplinarian.

But I also left knowing I would never put myself in such a role again. I would never accept another job where it was my responsibility to critique outfits and perpetuate the message that what girls show up to school wearing is more important than what they might actually do, be, and learn.