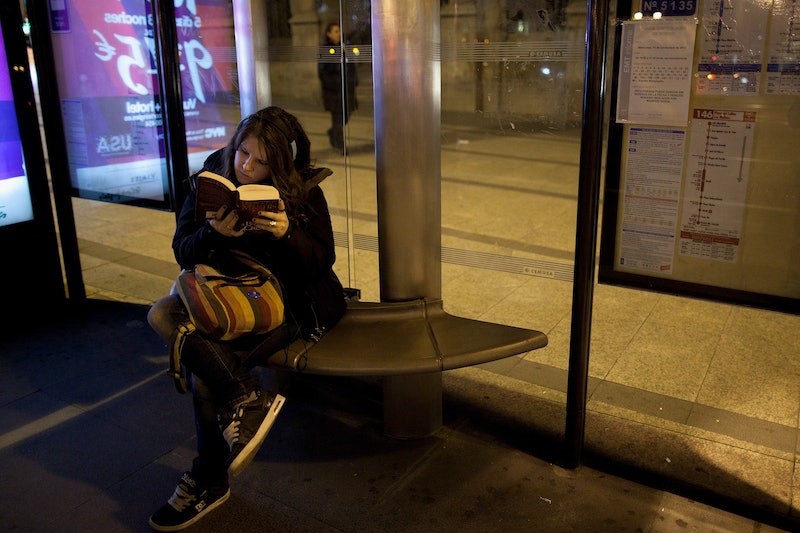 NaNoWriMo is upon us! For those of you not in the know, National Novel Writing Month, aka the cooler name for November, is a month-long writing challenge wherein participants try to write 50,000 words in 30 days. If you’re not interested in pulling out your calculator, that’s about 1,667 words per day. Though if you’re already a WriMo, that number is probably already embedded in your brain forever. I know it is in mine.

I'm already supposedly “serious” writer. I've taken advanced-level creative writing classes and finished novels without the assistance of NaNoWriMo, and I even get paid for writing now, so a lot of people ask me why exactly I do this. Everyone knows that NaNo novels never actually get published. For one thing, a full-length novel is more like 75,000 words, and for another, NaNo novels aren’t ever very good anyway. How could they be; they’re too rushed. Why waste your time on something that will never pan out, the theory goes.

First of all, NaNo novels have gotten published in the past, albeit with a lot of editing, I’m sure. But that is really not the point. NaNoWriMo isn’t about getting published. Anyone who thinks it’s remotely productive to think about publication while writing a book has probably never finished one. Writers write because they like to write. People who are crazy enough to commit to NaNo do it because they want to, because they want a challenge or because they enjoy the act of writing or because they need an excuse and a community to help jump start them into writing again.

Because that’s the thing: All writers hit slumps. All of us run out of steam or get stuck in our heads. We all let our self-doubt get the better of us on occasion, or get so busy that not writing one day doesn't seem like big deal until, before you know it, nothing’s been written in a month. NaNo provides a way out of that slump. It’s a way to remind yourself that you can write, and that you can do it everyday, and that the world isn’t full of haters — it’s full of other writers.

And in this lies the true beauty of NaNoWriMo. Writing is such a solitary activity. You sit down with a pen and paper or in front of a laptop and you try to take these passing thoughts in your head and turn them into something. And you do it all alone. With NaNo, you are never alone. There are forums and message boards and writing buddies and Twitter accounts and write-ins across the country and online writing sprints and encouraging emails from the site, and even if you don’t actually take advantage of any of that, they all still exist. So even when you are two thousand words behind and under-caffeinated and you haven't exercised all week, it's all fine, because there are literally hundreds of thousands of people around the world doing this crazy marathon right alongside you.

I’m lucky enough to have creative writing buddies in real life (though none of them are WriMos). But despite that, NaNo is still the time when I feel most part of a community. The energy of NaNoWriMo is hard to describe if you’ve never felt it, but it’s amazing.

And if you aren’t impressed by any of that, know this: NaNoWriMo has made me a better writer. The first time I tried NaNo I was so intimidated. It seemed impossible. And then I dove in anyway, and 30 days later, no one was more surprised than me that I’d written the full 50,000 words. And the experience taught me that I can in fact write everyday. That writing isn’t as hard as you build it up to be in your head. All you really need to do is sit down and just freaking write. Because you can go around thinking that of course you can write the next great American novel, but until you sit down and start writing, it’s all just talk.

NaNoWriMo is full of people who aren’t pretentious about their writing, who know the importance of producing something, anything, over sitting around talking about it. And joining in that community and that mindset every November is what makes me a better writer the other 11 months out of the year. The more you write, the better you get — and I write more because NaNo showed me I can. I am a better writer now than I was the first time I tried NaNo. In 26 days, I will be a better writer than I am now. I probably won’t have a manuscript I’m keen to let anyone read, but I will have had a ton of fun.

So if you’re four days into NaNo, take it from a three-time winner: it’s worth it. If you’re wondering whether you could still give it a shot this year, you totally can — people have won who started late. And if you’re still hating on the whole experience, well, I don’t have time for you, I have a word count to worry about.

See you all in December!

More like this
Jessica Simpson On The Time She Was Pursued By A Backstreet Boy & An *NSYNC Member
By The Editors
Netflix Shut Down 'Bridgerton' S3 Rumours About A “Very Dark” Storyline
By Bustle
We’ve Entered The Hot Boy Reader Era
By Samantha Leach
42 Black Owned Fashion & Beauty Brands To Support Today & Always
By Mekita Rivas, Shea Simmons, Kui Mwai and Dominique Norman
Get Even More From Bustle — Sign Up For The Newsletter
From hair trends to relationship advice, our daily newsletter has everything you need to sound like a person who’s on TikTok, even if you aren’t.