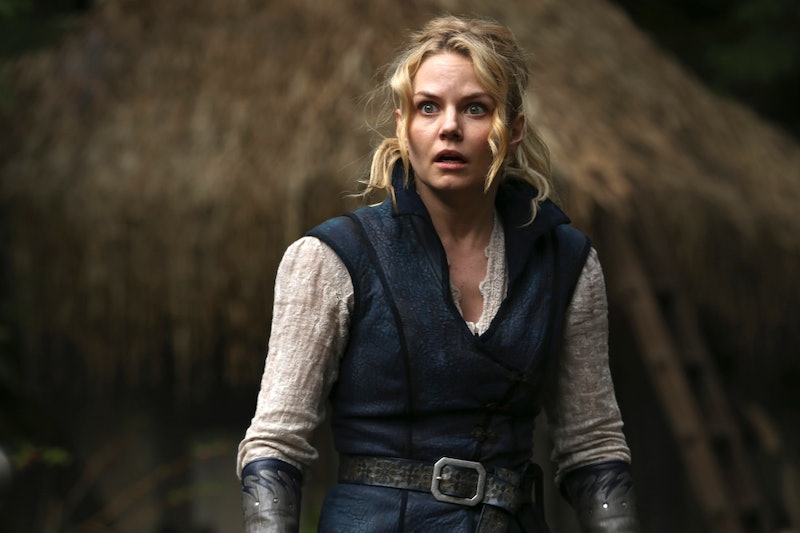 Well, if you were trying to break our hearts, you went there ABC. After an emotional Captain Swan reunion that seemed like the ultimate happy ending on Sunday night's Once Upon a Time Season 4 finale, Emma became the Dark One on Once Upon a Time . Emma lost her happy ending — she finally told Hook that she loved him — so that Regina could finally have hers. So, Snow and Regina's feud has finally come full circle and crushed my heart in the process.

To say that Regina and Emma have had a rocky relationship on OUAT would absolutely be an understatement. These two have bounced back and forth between being allies and mortal enemies multiple times over the past four seasons, so this sacrifice is huge and 100 percent emotional for any OUAT fan. Emma gave up Henry, loving Hook, and her family to make sure Regina got her chance with Robin Hood that she's worked so hard for. She finally had to live up to her Savior name and Emma gave a happy ending to the woman who lost hers because of Snow.

However good Emma's sacrifice was, however, I'm almost as heartbroken as I was when Neal died on OUAT Season 3 (even though his death was necessary for the story) about Captain Swan being over for now. I trust that Snow and Charming will do everything I can to save their daughter, but Emma finally saying those three, little words was too good to be taken away so soon. I mean, Hook died during the OUAT Season 4 finale about halfway through the two-hour episode — that was more than enough potential heartbreak for this couple for one episode.

So, what happens now that Emma is The Dark One — will she still have those feelings for Hook? They might not be the same feelings as before she took on all of that evil, but regardless of where they are and what spell might be plaguing them, these two always find a way to be together. We also can't forget that Rumple loved Belle while he was still The Dark One and, even though that didn't really work out well for awhile, these two did have time where their relationship worked and they're back together now that Rumple is a regular man again.

This doesn't mean that I won't be mourning the loss of Captain Swan for the time being, though.