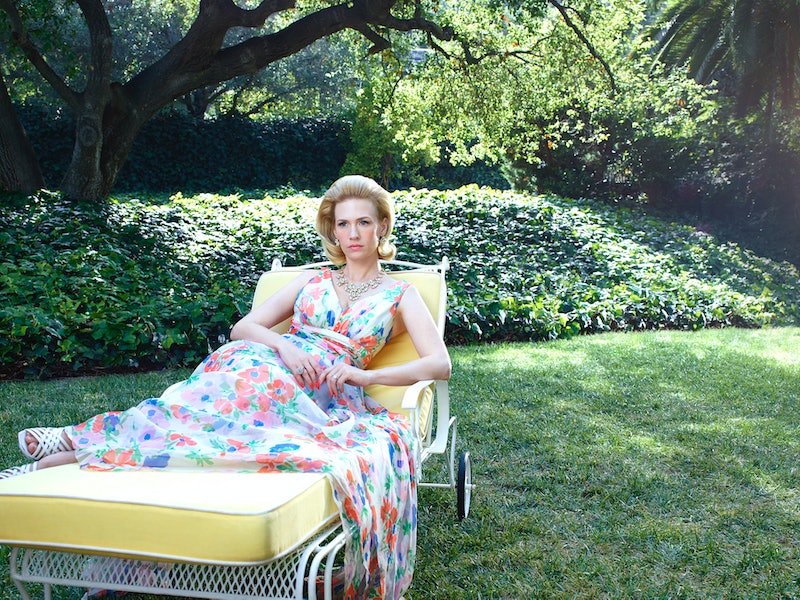 There are three things that have been constant through Mad Men's seven season run: drinking, sex, and smoking. Well, one of those things finally caught up with Betty Draper. In "The Milk and Honey Route" Betty is diagnosed with lung cancer, and immediately, the outcome doesn't look good. The doctor's suggest that she's got nine months to maybe a year to live. Could Mad Men really kill our Birdie? Unfortunately, it looks like that's going to happen.

Betty has gone back to school — to get a degree in psychology — and she struggles waking up a set up stairs. That's when she takes a tumble and injures herself (and her pride). Once at the doctors, it's determined that she's got a broken rib, but there's more. The doctor insists that she call her husband so he can come down and hear the prognoses. Cue Henry, and that's when we get the bad news. Betty, I'm just as shocked as you are.

With only one more Mad Men episode to go, is there anyway that she'd die before the end of the series? I don't want to think that's a possibility. While Betty's never been my favorite character, she's certainly been an interesting one. And whether or not you think she's a good mother or not, she's still a mother. Think about what her death would do to Sally, Bobby, and Eugene. Sure, Sally's off at school, but what about her younger brothers? You know there's no way Henry can deal with two young boys on his own.

At least Henry is on top of Betty's treatment, already suggesting doctors she can see. But is it going to be enough? Is this the beginning of the end? I didn't think Matthew Weiner would do this to us or Betty. However, by the end of the episode, we know exactly what's going to happen.

Even though we might not be OK with the idea of Betty dying, she's at peace with it. She's already made her choice. She's going to refuse treatment, because as she tells Sally, "I've learned to leave people when they tell you its over." Betty knows it's over, and she's not going to fight it.

Sally, on the other hand, is ready to fight it. Henry has pulled her out of school to be with her mom, but Betty wants none of it. Sally — really and truly! — is willing to stay at home to be with Betty during these final months and days. Even though these two are always at odds, deep down inside they love each other.

But, wait! In what I thought was a surprising twist, Betty outright shoots down Sally's idea to stay at home for the foreseeable future. Sally will return to school in the morning, and as Betty tells her, "I watched my mother die. I won't do that do you. And I don't want you to think I'm a quitter. And that's how I know when it's over. It's not a weakness. It's been a gift to me."

I'm not the one who's crying over this, you're the one who's crying. Seriously, out of all the characters on Mad Men, I never thought I would cry over a heavy Betty moment. The water works really come when Betty hands Sally a note with instructions for one she's gone. The instructions include things like, "please bring in the lipstick from my handbag," and "remind them how I like to wear my hair." Betty is ready for what's coming, and she wants Sally to be ready, too. Bobby and Eugene won't know — at least right now away.

It's safe to assume that this is probably the last time we see Betty on Mad Men. Her death will happen peacefully and quietly off-screen, and after Mad Men has concluded its run. It's sad, yes, but Betty's handling it with poise and grace, just like the model she was all those years ago. So let's not be sad about Betty, let's be happy. She wakes up the next morning and heads back to school. She's not going to waste the remaining time she has.

The note that she leaves for Sally — that, uh, Sally, you weren't supposed to read yet — Betty writes to her daughter that, "I know your life will be an adventure." Betty's life has sure been an adventure, too.