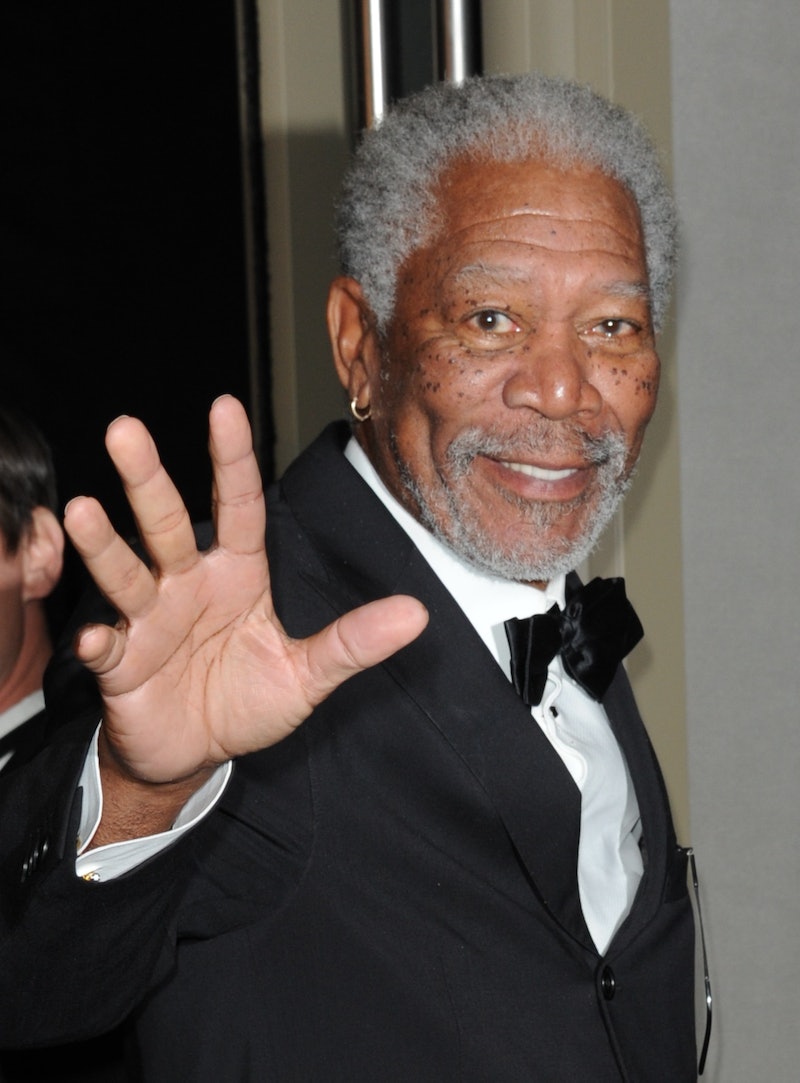 Morgan Freeman, pop culture's God voice and narrator of all your auditory hallucinations when you get too high, totally agrees that we should just legalize marijuana already. In a recent interview with The Daily Beast, Morgan Freeman calls for the legalization of marijuana "across the board." What a fun coincidence!

"Marijuana has many useful uses," Freeman told The Daily Beast. The Oscar winner reportedly started partaking to treat his chronic pain. "My first wife got me into it many years ago. How do I take it? However it comes!" he said. "I’ll eat it, drink it, smoke it, snort it!" Fun grandpa alert! Freeman grew up in an era when marijuana was touted as a menace to society, but he seems to be happy that the push to legalize is finally having some traction. "This movement is really a long time coming," he said. "And it’s getting legs — longer legs."

Back in 2008, Freeman sustained severe injuries in a car accident that left him with permanent nerve damage in his left arm. Because he still hasn't entirely regained feeling in his left hand, he still wears a compression glove on his affected hand. The Shawshank Redemption actor says that marijuana is the only thing that helps him with the discomfort of his fibromyalgia. He's also well-versed in the research surrounding the palliative uses of marijuana and explained,

They’re talking about kids who have grand mal seizures, and they’ve discovered that marijuana eases that down to where these children can have a life. That right there, to me, says, "Legalize it across the board!"

For years, Freeman has been an advocate for legalizing. In a 2012 interview with Newsweek, he called the federal criminalization of marijuana "the stupidest law possible." He's also joked before about how rocking the ganja gives him energy — the opposite of many people. But hey! Each body responds differently to substances.

I can't speak for Morgan Freeman, but if weed gives him energy and, I'm guessing, simultaneously helps him achieve his soothing timbre, we probably should just legalize already. After all, he's done all of the weed-smoking world a great service. His voice-over work has helped millions of people work themselves out of their too-high paranoia. At least, something that I feel would help when the edibles hit too hard is imagining Freeman talking about penguins. Life hacks, right there.

More like this
Alyson Stoner Says She Went To Rehab After Auditioning For 'The Hunger Games'
By Jake Viswanath
Lily Allen Was “Quite Emosh” After Performing Sober At Glastonbury Festival
By Stephanie Topacio Long
Here’s How Lizzo Is Supporting Abortion Rights After The Roe v. Wade Reversal
By Brad Witter
Olivia Munn Got Real About How Her Body Hasn’t “Snapped Back” Post-Pregnancy
By Stephanie Topacio Long
Get Even More From Bustle — Sign Up For The Newsletter