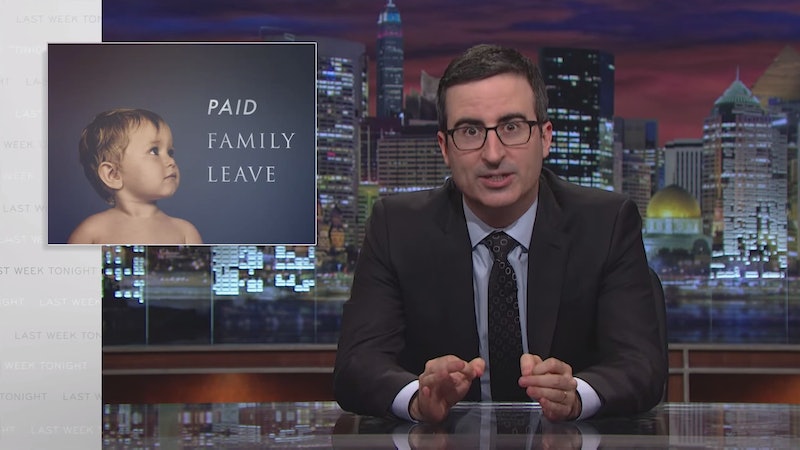 Sunday was Mother's Day, a day when every American called their moms — or a mom — to show their appreciation. While it's a sweet gesture to have a national holiday in honor of moms, it might come off a bit insincere when the country is lacking one major policy that would protect them. On his Mother's Day episode, John Oliver talked about unpaid maternity leave, pointing out that if America really loved its mothers, then it would go beyond celebrating them once a year and implement legislature to help them in their day-to-day lives.

Oliver opens his segment by illustrating how big a deal Mother's Day is in this country, playing clips of a wide, and bizarre, range of Mother's Day promotions from businesses like JCPenney and ... Hooters. The clear message here?

In America, there is nothing we wouldn't do for moms — apart from one major thing.

That major thing is paid maternity leave. A PBS report reveals that the United States and Papua New Guinea are the only countries in the world that don't have policy to give mothers paid time off after having a baby. The only policy we do have is 12 weeks of unpaid leave, and even that has severe limitations, Oliver says.

Such as? Mom must work at a company with 50 or more employees, she must have worked there for over a year, and she must be a full-time salaried employee, so freelance moms wouldn't get this "benefit."

And what that means is that 40 percent of workers are not covered by the federal law, so if a worker with no paid leave goes into labor at work, she better hope it's on her lunch hour and that her co-workers don't mind if the break room gets a bit messy.

When women do take these unpaid maternity leaves, they often have to use their vacation days to balance the unpaid days and some even put their maternity leaves on their credit cards.

This is not how it's supposed to work. Mothers shouldn't have to stitch together time to recover from childbirth the same way we plan four-day weekends in Atlantic City.

Oliver then plays heartbreaking clips of new mothers who had to leave go back to work essentially right after giving birth, including one mother who gave birth to her baby six weeks premature and had to be back in the office just days afterward.

And it's not just mothers who are unable to take a proper leave. Oliver emphasized the cultural stigma attached to paternity leave in this country by playing a clip of radio hosts skewering Major League baseball players for missing games right after the birth of their baby. One of them even suggested planning a C-section before the start of the season — yeah, that happened.

Perhaps the reason why America has such a shoddy system in place stems back to when the 12-week policy was first proposed in 1993. Oliver then plays a clip from that time period of legislators warning that the proposed bill was invasive to families, anti-business, and would cost jobs. Naturally, he mocks their fervor at a bill that would simply give moms time to adjust to motherhood and get back on their feet.

"I say this to the House if we allow new mothers to take time off work, businesses shall crumble, our cities shall burn, and hungry wolves shall roam our streets. I'm not anti-mom; I'm anti-wolf! That's all I'm sayin'. No to wolves!"

Oliver then points out that a survey conducted after the bill was passed showed no signs of businesses declining, which many people then argued was because the policy was unpaid. Paid leave, on the other hand, would surely be damaging. Not so, says Oliver.

He uses an example from California, which introduced a six-week partially paid family leave funded through a small payroll tax that cost employers next to nothing to implement. After trying it out for a while, businesses surveyed reported either positive or neutral effects.

Paid paternity is a bit like having hockey on in the background of a bar. It's not hurting anyone and a couple of people are actually really into it.

But even though the law worked out well in California, only two states have followed suit, New Jersey and Rhode Island. Why is that? Because, unfortunately, in this country, Oliver says, many bills that support women will face opposition. Like Minnesota's Women's Economic Security Act, for example, which sought to expand unpaid maternity leave and introduce further workplace protections for women. Several legislators voted against it last year, Oliver says, and these same lawmakers hypocritically made a Mother's Day video spouting how much they love their mothers and the mothers of their children.

You can't have it both ways. You can't go on and on about how much you love mothers and then fail to support legislation that makes life easier for them.

Amen to that! So what's Oliver's solution in the meantime? According to him, until America addresses this hypocrisy, here's the only message we should be sending our moms on Mother's Day:

Mothers — we owe everything to them. They gave birth to us, they nurtured us, they made us who we are. And this Mother's Day, we have just one thing to say to all the mothers out there: Get the fuck back to work.

Seriously, get back to work now. Because unless you can personally afford to take the time off you want, we're gonna need you to get your exhausted ass back to work and show us that can-do attitude that moms are famous for.

We'd do anything for our moms, up to but not including paying them to stay home for a while after pushing a human being out of their body. But we do want to say thank you, and what better way to thank us for thanking you than maybe turning up on time once in a while?

We appreciate you, moms. That's why we're happy to allow you to bring that weird donut cushion to work, just so long as you promise not to tell us what it's for. And if you need to find a place to pump breast milk, well, no problem.

Either use the break room, or even better, why not get some fresh air?

It'll be like a picnic. And, moms, you love picnics. The important thing is you come back to work when you're ready. Or when you're not ready. Or even when your placenta is still technically inside you.

Oopsie. Clean up in aisle seven.

Look at you, supermom, taking care of everyone. Because remember, not only can you balance work and family, you have to.

And that's why this Mother's Day, we know you'll be grateful, moms. Because you'll understand that even though 183 other countries do more for you, we do as much as we feel we can right now.

What we're saying is you deserve the very best, moms. You're just not gonna get it.