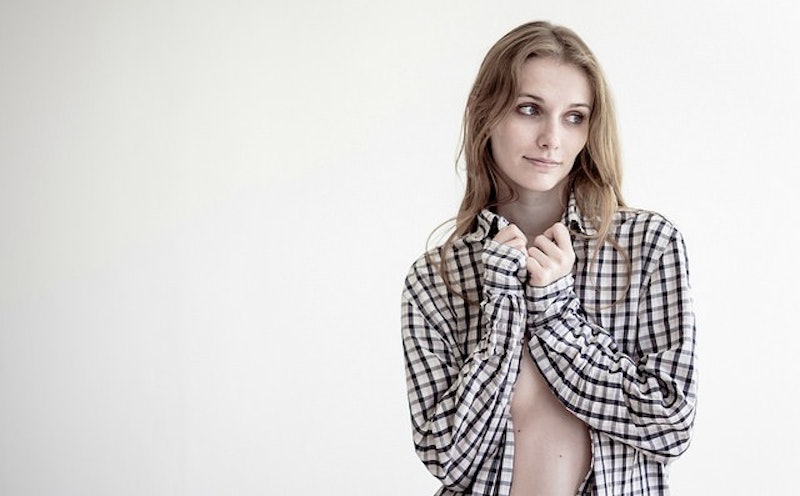 Have you had an orgasm from nipple play alone? I know it sounds too good to be true, but it's a real thing. Men's Health reports a study of 213 woman that said 29 percent had experienced a breast orgasm— that sounds high to me, unless a whole bunch of my friends are having crazy nipple orgasms and I'm just out of the loop. But they're definitely more common than I thought and I'm a big fan of nipple play but have never had one, so now I'm intrigued. How do they happen? And how can I have one?

So, apparently according to science there is a really good reason they happen. When you play with your nipples (or someone else does, for those of you better at dating than I am) it stimulates the same part of your brain that playing with your clitoris does. One study found:

"The researchers discovered that stimulation of the nipple activated an area of the brain known as the genital sensory cortex...What this means is that women’s brains seem to process nipple and genital stimulation in the same way. In light of this, it is not at all surprising that many women are aroused by having their nipples touched and that, for some, this may be enough to lead to orgasm."

Guess we finally learned what Monica's seven was...

Cosmopolitan talked to two women who have had nipple orgasms before. While both enjoy it, they prefer genital stimulation, in part because it's more reliable. They also both reached orgasm through different techniques, an important reminder that women vary a lot in what they like. There are quite a few "how to give her a nipple orgasm" guides out there, but I think it's best to just talk it out and experiment. I'm certainly going to. But one of the women warns not to get to caught up in trying to orgasm through it, which makes sense, as a sure fire way to make an orgasm disappear is to put too much pressure on it. Instead she suggests:

"I found I couldn't stimulate myself to orgasm on my own; it only happens with a partner. Just take the time to experiment and be open-minded about different types of stimulation and different sensations. Don't focus on whether or not an orgasm is building; just enjoy the sensations for what they are."