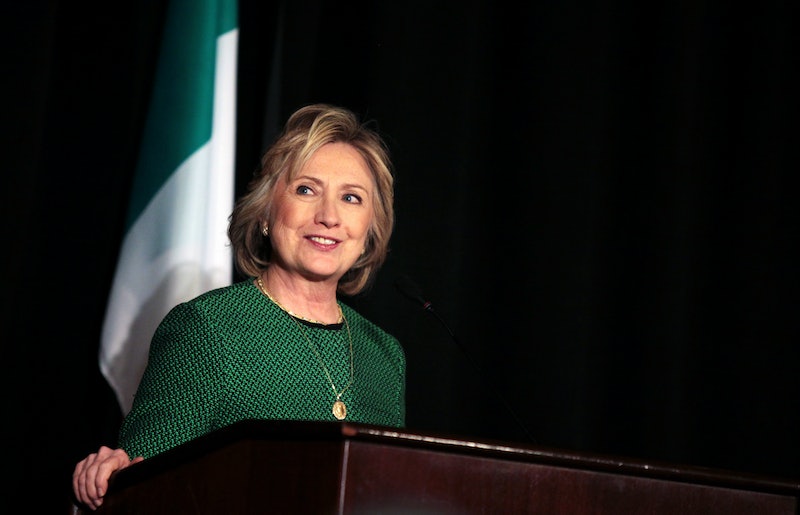 On Monday, the Obama administration gave its nod of approval to Shell to begin drilling for oil in the Arctic Ocean, off the coast of Alaska. Drilling is slated to begin this summer, as long as environmental conditions are met. For Shell and the rest of the oil industry, this is a big victory. Shell has been pushing for years to gain access to the oil reserves in the Arctic, and the Obama administration has long been tepid about oil drilling because of potential environmental implications. Environmentalists, naturally, are less enthused about this allowance. But the satisfaction and dissatisfaction of both groups could soon be shifting, as a new president takes office in 2016. If Democrats manage to snag the top office again and elect Hillary Clinton, will she approve of drilling for oil?

While Obama will not yet endorse Hillary Clinton for 2016, he has said that she would make an “excellent president.” So, does Obama’s potential Democratic successor share his viewpoint on oil drilling and, more specifically Keystone XL? Well, that’s not yet quite clear. Because, much to the chagrin of many liberals, Clinton has yet to address the Keystone XL pipeline and publicly express her opinions on it.

Obama may have made a decision on drilling in the Arctic on Monday, but he has yet to make a decision on the Keystone XL pipeline. And as even those opposed to the Keystone XL pipeline grow tired of waiting for Obama to make a decision already, the stance of the next president becomes all the more important. Yet, while Clinton stands a serious shot at snagging the seat in the Oval Office in 2016, she has yet to take a firm stance on her opinions of the oil pipeline that was commissioned way back in 2010.

According to Forbes, Clinton offered the biggest hint about her opinions on the pipeline back in October 2010, when she was asked about whether a Canadian crude oil pipeline should be maintained amid concerns about climate risks. At this point in time, Clinton was secretary of state, and negotiations on the Keystone XL pipeline had been ongoing for about two years.

We haven’t finished all of the analysis. So as I say, we’ve not yet signed-off on it. But we are inclined to do so and we are for several reasons — going back to one of your original questions — we’re either going to be dependent on dirty oil from the Gulf, or dirty oil from Canada.

This quote may imply that Clinton might just go ahead and accept the inevitable fact that if the U.S. is going to continue to use oil, it’s going to have to get it from somewhere. But that stance is further complicated now that Clinton is in the midst of her campaigning and has environmentalist billionaires backing her, such as Tom Steyer. While Clinton boasts an impressive record on environmental and energy issues during her tenure as the senator of New York, she did once vote for a bill that scaled back on environmental protections for Florida's coastline, and offered 8 million additional acres of the Gulf of Mexico to offshore drilling, according to Forbes. Moreover, reports have surfaced that Clinton Foundation has received donations from big oil and pro-Keystone groups, the National Journal reported.

All in all, Clinton's stance isn't so easy to decipher. Maybe that’s why she’s been staying mum. But, just as Obama has found out from his hesitating on the Keystone decision, indecisiveness is only an option for so long.