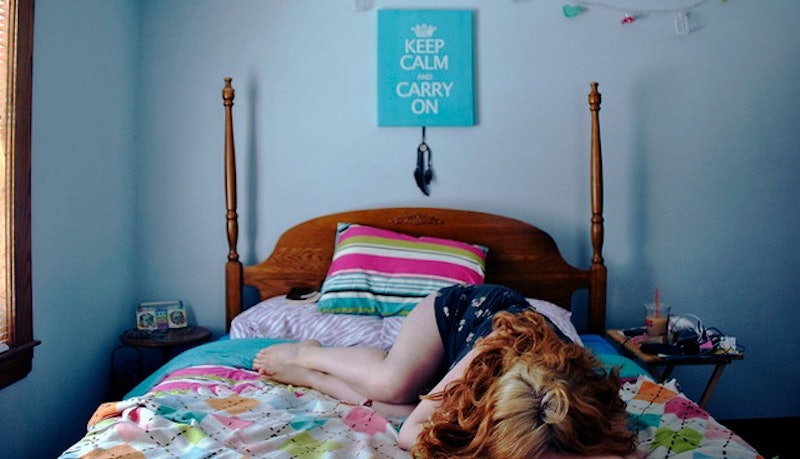 Sex is awesome! It can also be awesomely awkward. It's pretty much a given that every adult on the planet has had at least one bumbling, stumbling, completely floundering sexual encounter in their lifetime. It's basically science, awkward sex happens to everyone. Thankfully, there are resources out there to help us deal with all the weirdness that can occur during sex. And a lot of sexual partners are perfectly willing to overlook the awkwardness because...well hey, they still get to have sex with you. And in many cases, that's good enough for them.

But sometimes, things get really real. Things happen. Strange things. Freaky things. Gross things. Things that make you question whether you should ever have sex again. And you know that there is no way you will ever forget that one particularly icky, cringe-inducing sexual experience. (Of course, part of it has to do with the fact that you told your friends, who will never let you live it down.)

I put out some feelers online to collect the gasp-worthy "awkward sex" stories from women. Strong, brave women who - despite gastric problems, "good-for-you" assumptions, and gorilla suits - have managed to soldier on.

Read at your own discretion: these are truly, truly awful!

It was 7 a.m. and he was massaging my stomach, feeling his way down my body. I started laughing, enjoying the early morning play, and made my way to my knees, eventually straddling him, as I proceeded to give him a blow job. In a moment of readjustment, I noticed a flash of red on my all-white bedding. I paused and looked down to find a cave-painting-like smear on the sheets. Oh. My. God. No. 'I think I just got my period!' I blurted out. I slowly peeled my fully naked body off of him, dreading what I knew I would find. Yep, I bled all over his leg. In my three minutes of what was supposed to be a sexy morning straddle, I'd managed to get what looked like a heavy Day-3 flow all over him (two weeks before I was due, mind you). I freaked out and ran to the bathroom, being anything but the cool, calm, and collected girl, as a stranger lay naked on my bed, with a bloodied leg.

After a very romantic lunch with my boyfriend, we decided to slip back to his place quickly and have sex. I managed to get through nearly three minutes of being on top of him before the most horrific noise came out from my ass. This was not an excusable moment that I could pass off as an awkward sex noise. This was a full fledged “I ate too much at lunch” fart. His reaction was a cross between horror and panic...and I'm so horrified I immediately buried my head on his chest laughing and crying so hard that I actually started to pee all over him (while he's still in me). He freaks out and pushes me off from him and I actually fall of the bed and whack my head on the night stand. I wish I was making this up.

So I’d gone out on some dates with this guy in college and we never hooked up or anything. Fast forward around 7 or 8 years later. We go out a few times...time to do it, right? OH GOD mI’M CRINGING JUST THINKING ABOUT IT. First, I don’t think we did any kind of foreplay really, just straight to it. OK, fine. No big deal. He takes off his clothes and the man is COVERED in thick hair. HOW THE HELL DID I NEVER NOTICE THIS??? OK, fine. Then he’s just rubbing himself all over me and finally he’s ready to do it and it’s literally as big as my thumb. OK, fine. Size isn’t everything, right? About 20 seconds later (not an exaggeration) he says “Oh shit” and I’m thinking the condom broke. Nope. He’s done. It’s over. So basically, I got rubbed down by a bear and fingered by his penis for less than a minute. I gave it another shot and it turned out about the same.

The first time I had sex me and the guy (who I knew, but wasn't my boyfriend) were both a little drunk and he had trouble performing. I gave him a blowjob and he got hard, so we started having sex, but he couldn't stay hard long enough to finish. It was my first time, so I was very confused the whole time and didn't know what to do to help the situation. After three tries and three condoms, I decided it wasn't going to work and got up to leave. As I'm putting my clothes back on, he says, "Well, at least I know that was good for you." Needless to say, we never hooked up again.

I was in my early 20s when I met a very nice guy in the city where I had recently moved. Lee ended up building me a massage table out of wood after I gave him a massage on the floor after-hours (I was in massage school at the time, and was inclined to help him with his back pain). After he brought me the table, which I still have to this day, I was so ecstatic, I decided to go out with him on a date. We had gone on several dates and were really enjoying each other’s company. Then one evening when I was visiting him, he excused himself while I waited in the living room. When he returned, he was dressed in a rubber gorilla suit and wanted me to pour oil on him and I’m not sure what else, but I was completely taken aback. I told him that wasn’t a place where I was at and that it seemed we’d better part ways. I knew he was disappointed, but it’s better to find out your compatibility at the get-go, right?

Do you know when you have a glass of water in front of you and for a split second you forget that it’s water and you think you’re about to drink Sprite and it just really takes weird for that first sip? That’s sort of what happened to me when I ran my hands down his back, hoping to feel a smooth (muscular or not) surface. Instead, I felt a neck/upperback that is similar to what my legs feel like after 2 weeks of not shaving — and a middle/lower back of just HAIR. Not pleasant….[Plus] Boy must have gone through a shit-ton of pacifiers growing up, because daddy bit right THROUGH my nipples. I wasn’t exactly sure if he was trying to bob for apples in my areola or if he needed a 3 a.m. snack — but it was an incredibly unpleasant experience. I actually contemplated whether now would be the time to experiment with self-piercing of my nipple, since it was so incredibly numb.

My partner and I were on a marathon stretch of sexual activity and night was becoming day but we still carried on. I was performing oral sex on him and I was tired, but I’m no quitter. I thought I would try a position where my head was laying on his thigh. I thought I was a genius! At least that was until I was woken up by him shaking my shoulder saying, ‘hey, did you just fall asleep?’ Yes, yes I did fall asleep while performing oral sex on you. Totally embarrassing and my friends to this day still won’t let me live that down!

An old flame who tended to drink too much passed out in the middle of performing cunnilingus on me. He stopped I assumed to take a breather and then I heard snoring between my legs. I’ve had the usual pencil dick, shrinkage at the wrong time and the guy that shaved “down there.” Then there was the guy whose bed was in his kitchen and old food was all over the counter (thank you, NYC apartments). Or getting into someone’s bed at their place and seeing bloodstains on the sheets (eeeeuuuww!). Thank goodness that part of my life is over and I’ve been happily married for eight years! And those years are far behind me.

One time, I was really nervous about hooking up with this guy I met on a film set, so when he offered to smoke up, I took him up on it. The only problem is that I had somehow forgotten that weed makes me super paranoid. Halfway through gettin' down to business, I was hit by this feeling that I had to get out of there. Like, I needed to be gone, because I barely even knew this guy. He could be trying to kill me! He could have an STD he's not telling me about! He could be a Brony. Obviously, none of this was true, but it made sense in my head at the time...So I scrambled away from his penis, threw myself across the room, and started yanking on clothes in silence, barely explaining myself to the poor, extremely confused dude. Then I booked it out the door and haven't talked to him since!

I thought the g-spot orgasm was a myth. He’s doing the thing with his hand and I was getting closer and closer and finally I reached the peak moment…and then I realized something had gone terribly wrong. I put my hands over my face and said “…did I just poop?” I was frozen lying there. And he said “You might want to go get yourself cleaned up.” OHMYGOD OHMYGOD OHMYGOD! I jumped out of bed, took two steps toward the bathroom, and then he said “Here…you might want to take this with you.” He’s holding a wadded-up tissue with my poop on it. I grabbed it and dashed to the bathroom. I was mortified, on the verge of tears, thinking “I just shat in his bed…how can this get any worse?” And then it dawned on me that it couldn’t: I’d just done the worst thing anybody could do while having sex and now, I had it out of the way. Nothing that bad can happen to me again while having sex!