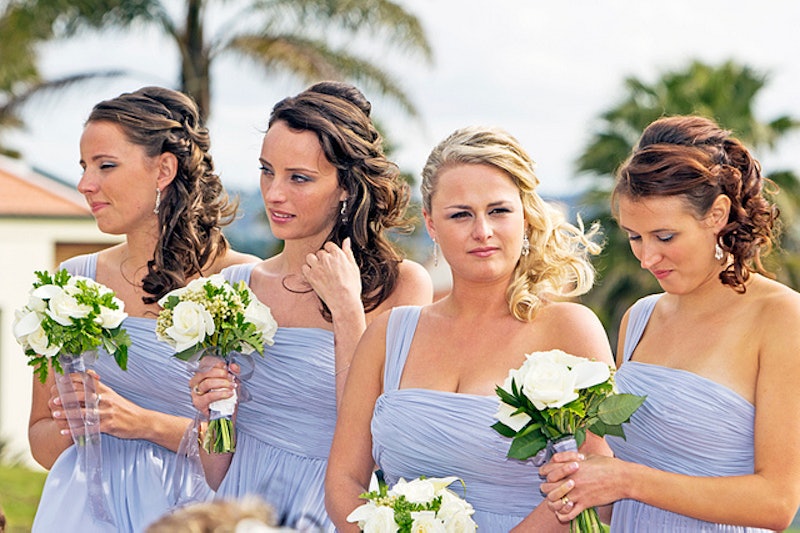 If you've ever been a bridesmaid, you know that being asked into the wedding party is a real honor. And it's fun too! The parties, the socializing, the drinking, the dancing...it's a great feeling to be asked to stand up for the bride and groom on the most special day of their life. Unfortunately, being a bridesmaid also means subjecting yourself to constant verbal diarrhea from others. The lead-up to the big event is replete with cringe-worthy discussions around ridiculously expensive dresses you'll never wear again, boring gift registries (is she really going to use that fine china? She doesn't even know how to cook!), and unnecessary responsibilities, like holding up her dress while she uses the bathroom.

Not only that: weddings are a bridesmaid’s cesspool of inappropriate questions and unsolicited opinions about her relationship, sexist assumptions about marriage, and clichéd statements about her appearance. And it's not just the bride who's guilty of these things: more often than not, it's the whole shebang of folks involved in a wedding who carry on this kind of annoying bridesmaid banter.

If you know a bridesmaid-to-be, it's time to stop saying these eight things right now. She will (silently) thank you for it.

Brides-to-be are often guilty of trying to verbally justify the wardrobe investment that bridesmaids make. And sure, a bridesmaid may be able to re-purpose her dress. But that's providing she has a suitable event to wear it to, that she still fits the dress months or years post-wedding, and — oh — that she actually likes the thing.

It's hard enough to get excited about dishes and soap dispensers and pillowcases when you receive them. But when you're a bridesmaid, you are subjected to constant inane chatter about things you never, ever wanted or needed to know. Like how much the bride loves the color periwinkle, but abhors all things chartreuse. Meanwhile, because bridesmaids are expected at most if not every bridal shower, you find yourself frequently wracking your brain for synonyms to "cute" and "lovely," just so you can contribute to the conversation come gift-opening time.

3. "I always thought you'd get married before her."

Seriously, why do people say this? There are so many negative beliefs and connotations wrapped up in these eight words. It reeks of sheer disdain for the bride. The person saying this is also insinuating that the bridesmaid has disappointed him or her by not being "first" to get hitched. It's as if the so-called "race to the altar" is not actually about the engaged couple, but a competition among women. People who say this tripe tend to assume that marriage is something every woman not only wants, but needs.

4. "You know what they say: three times a bridesmaid, never a bride, hyuk hyuk!"

Hilarious. But not really. First, cliche much? Second, some women would really, really like to be married, and being a bridesmaid can bring up feelings of loneliness and depression (trust me, I've been there). So to make fun of one's single status is kind of mean. Not to mention sexist: after all, there are tons of single guys out there who have been groomsmen gads of times — and nobody ever seems to make an issue out of this.

This question is really inappropriate unless you're super tight with the person you're asking. Unfortunately, weddings (and all the events leading up to them) tend to bring out the "romantic busybody" in people you barely know. So you get hounded by distant aunts, the bride's grandmother, and friends of the bride you've never met but who think you should be married (because, well, they're married). But here's the thing: bridesmaids don't sign up to put their relationships on display. Bridesmaids are there to support the bride. The status of their relationships should therefore be off-limits.

6. "Hey, I know this single guy/girl who you should totally meet..."

Too often leading up to and during a wedding, bridesmaids are subjected to unwanted matchmaker mentality. Upon learning that a bridesmaid is single, at least one person (say, a shower and/or wedding guest) is likely to try to set them up or offer unsolicited relationship advice. Despite the matchmaker's good intentions, not all bridesmaids are jumping at the bit to be paired off.

This statement is a go-to reception standard for the toast to the bridesmaids (often said by the groom, groomsman or best man). It's never said with much feeling. So why say it at all? Trust me: most bridesmaids would prefer to be genuinely recognized for their friendship and/or contribution to the wedding celebrations.

8. "Can you come with me to the bathroom? I need someone to hold my dress for me."

When did it become part of the bridesmaid's job to assist the bride on the shitter? Gross! Isn't that what flower girls are for?