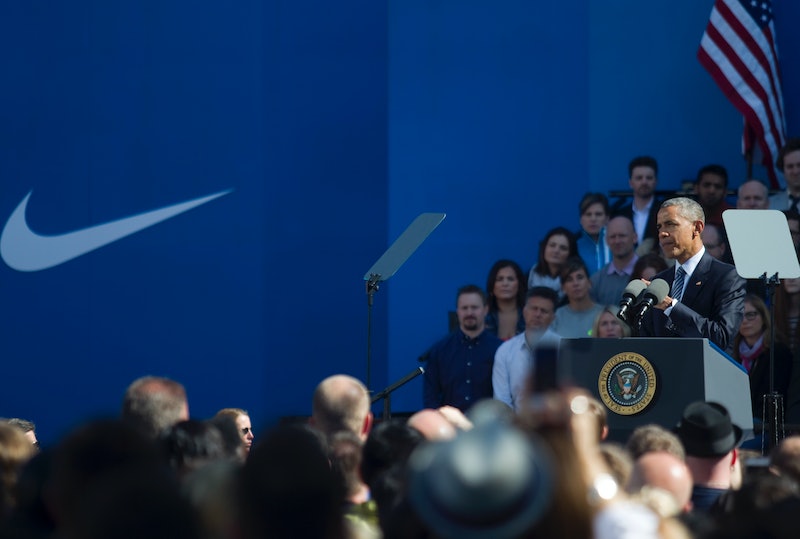 Last week at Nike HQ, Obama brought up a piece of legislation that could potentially raise labor standards globally and greatly increase job opportunities for Americans. If the legislation were to get passed, Nike could manufacture shoes in the US for the first time in thirty years.

The legislation that is currently being discussed is called the Trans-Pacific Partnership, which will give Mr. President (or possibly Mrs. President in the future) most of the power to deal with trade agreements. The president will not need as much input from lawmakers to create these trade decisions. Nike mentioned in a release that if footwear tariffs were lowered through the TPP, Nike would be able to, “accelerate development of new advanced manufacturing methods and domestic supply chain to support US based manufacturing.”

In other words, if Nike spent less on taxes, they claim that they could spend more on better quality labor, provide up to 10,000 jobs in the US and even start manufacturing their shoes in the US for the first time since the mid-1980s.

Like all legal matters, there are critics who oppose Nike and think this legislation won’t be able to change much. Critics are especially doubtful of Nike as large manufacturing companies are often notorious for promising better work conditions and failing to follow through. But for now, I think it’s too early to make any calls.

The legislation is currently being discussed in the Senate and House, so be sure to keep an eye out for any updates on this matter.