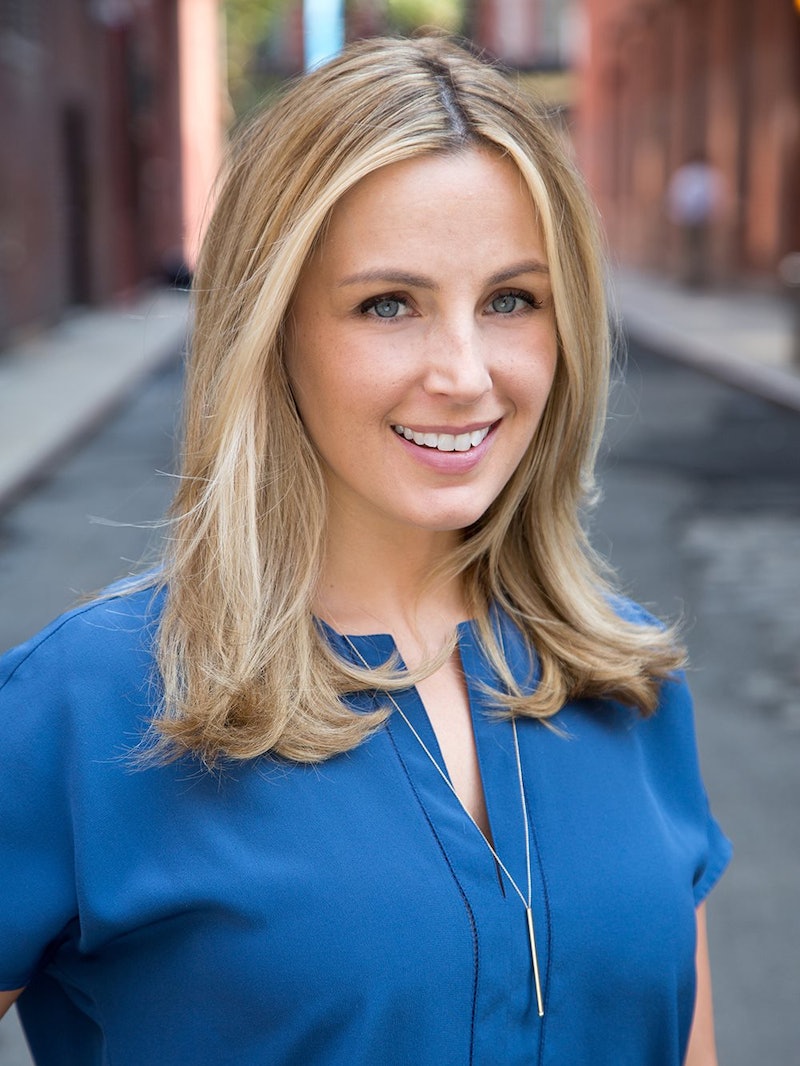 The last decade of our pop culture pantheon is teeming with unlikable men that we're fans of — but unlikable women? That's a whole other conversation. Pop culture seems totally fine with giving the thumbs up to guys like Don Draper and Walter White, but Betty and Skyler? They get derided and crucified. Men can be unlikable while women are unforgivable. This is interesting discrepancy to keep top of mind when cracking open Jessica Knoll's Luckiest Girl Alive (Simon & Schuster).

Luckiest Girl Alive arrived to me with an unusual addition: a letter to the reader from the writer. In it, Knoll explained her love of unlikable characters like Don Draper and Tony Soprano, and revealed her desire to create a similarly complex woman. She warned that we may not care for main character Ani initially, but to give her a chance to tell her story.

Ani is, as Knoll describes her, not someone whose psyche is a pleasant place to chill in. She’s self-obsessed and judgmental, a few scant months out from her big social-climbing wedding. Built small and beautiful, she’s in the midst of starving herself into an outlandish Manhattan figure. Running on sheer fumes and persistence, she’s also clawing ahead in the kind of magazine career everyone kept reminding Anne Hathaway that all the girls were dreaming about in The Devil Wears Prada.

But just like in Gone Girl, as Amazing Amy’s diary hinted, this glittery façade is one no one could sustain without a truly horrifying underbelly. When Knoll teases the curtain back on Ani’s past, our insufferable story companion shades into a fascinating survivalist. After completing what is destined to become one of the summer’s most gripping reads, I discussed the creation of Ani with author Jessica Knoll.

You'll want to read Luckiest Girl Alive for the incredible story that will have you turning pages like a madwoman, and see what Knoll has to say below about unlikable women characters — the debate that has us all going out of our minds.

BUSTLE: We see push-back on unlikable female characters over and over again. With the publication of Luckiest Girl Alive, do you think that there may be forward momentum?

JESSICA KNOLL: I don’t think that we are wanting for examples of strong, unlikable female characters. I think we have just as many examples of complicated women in literature, TV and movies as we do male examples. But I think the traditional difference is how we embrace these men versus how we scold women. There is so much research now on gender in the workplace and how gender affects your perception of likability, and your reaction to a man acting aggressively in the office versus a woman behaving in the same way, and it goes back to us preferring people to act within their culturally assigned roles. For women, that’s the expectation of being nice and nurturing and caring, and for men it’s that they take charge and are ambitious by default. We like when people act within their boxes.

What I think is starting to change is that we are opening up these boxes and becoming more receptive to seeing women acting more aggressively, in the workplace and in the broader culture. Our bias stems from what we know, but we’re starting to have conventional tropes of what a man or a woman should be fall by the wayside, and our reception of unlikable characters shifts along with that. I really do think that we’re entering a time where we’re starting to embrace them with the same kind of soft spot we’ve developed for characters like Don Draper and Tony Soprano. Hopefully we’re going to have more similarly iconic female characters in the future.

Ani is a great example of that next generation of female character, and I’d like to know a little more about how you created her. The book has garnered comparisons to Gillian Flynn’s Gone Girl and Amazing Amy, but despite her psychological intrigue, Amy was a psychopath. You've crafted a character with that depth who isn’t actually insane. How did you bring her to life?

Ani is meant to be a real woman — not every woman, and not every woman will see much or any of themselves in her, but quite a few will. Much of the writing was pulled from my own experiences leading up to my engagement and wedding. I really wanted to get engaged, and I wasn’t trying to be that “cool girl” who doesn’t need marriage. I wanted it. And that, to me, was disappointing. I was disappointed in myself for not wanting marriage for the right reasons; I wanted it for status, and I thought I was better than that. I’m a card-carrying feminist! Why am I falling into this antiquated trap of thinking I’m not important until I have a ring on my finger? That pissed me off.

When I did get engaged, I noticed people treating me differently. I’d walk into a store and be given more attention by the sales staff because I had a ring on my finger. There’s just something about that jewelry communicating that you’re successful and grown up and you have your life together… someone that other people should take seriously. But I was all of these things before I got engaged! Why was I still buying into this?

I had a lot of unresolved conflict with that, and it turned out that I could best work it out in the writing. I felt a little like I was ranting, but the frustration came from a deep, pure place inside of me that was trying to work out with how I could fancy myself one way, but that wasn’t necessarily what my actual desires were. They weren’t that independent and evolved. They were things that had been implanted in me as to what I was supposed to aspire to.

The publishers and editors I worked with were excited to see this kind of story coming to life, and never suggested that I soften her edges.

That definitely comes through in the writing of Ani’s inner monologues, which often has a sort of essayistic quality. After completing the manuscript, did you encounter any issues with editors or publishers being leery of this “ranting” character and her story?

I think that it wasn’t a conscious thought while I was writing. I didn’t sit down and think, “I’m going to write an unlikable character!” I really just sat down and started writing things that felt true and real to me in my life. She was the same age as I was when I began writing, and it felt natural to me, her character and plight. Then I amped up the drama with these dramatic, ripped-from-the-headlines events because I’m fascinated by crime — I always have been, so I had to work that element in somehow.

It didn’t occur to me when the manuscript went out that people wouldn’t get what I was doing, because I didn’t think I was doing anything that outrageous. Everything she dealt with in being obsessed with her weight and fitting in were things I’ve dealt with and what everyone I’ve ever known has dealt with. It wasn’t until I was talking to publishers that I realized this was an unusual occurrence to have a female character written like this. The publishers and editors I worked with were excited to see this kind of story coming to life, and never suggested that I soften her edges.