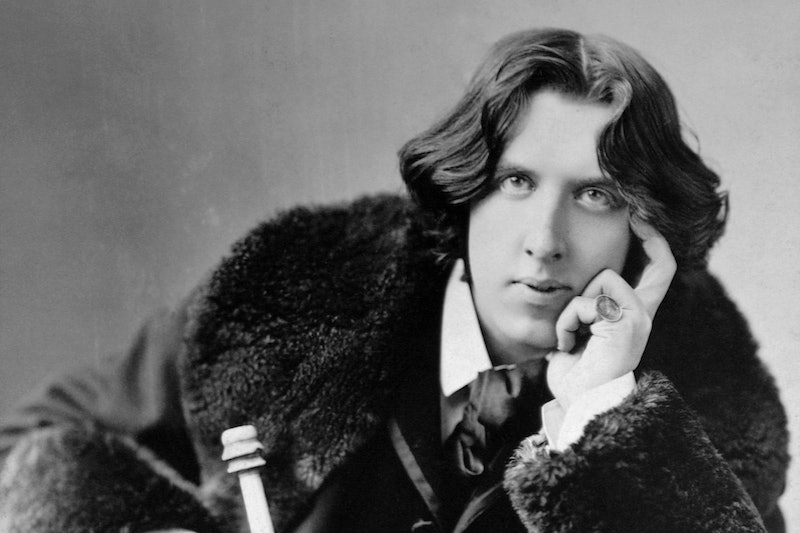 If you don't know the beautiful term "to read for filth," it's time you learned. Popularized by the cult film Paris Is Burning back in 1990, "reading" probably originated in the LGBT community in New York in the 1980s — and it's the art of the ultimate witty comeback, the burn that packs a witty punch with a serious sting in the tail. Reading for filth? That's taking it to its furthest extent, with insults so brutally eloquent that they make you with you'd said them instead.

But witty comebacks aren't a new thing: ever since we've had the ability to form sentences, we've been trading ripostes and retorts — and some historical figures are known these days not for their politics or their innovations, but for a seriously bitchy barb they once landed.

Some famous retorts from history aren't all they seem, however. The common witty quote attributed to Mahatma Gandhi — that, when asked his opinion on Western civilization, he responded "I think it would be a good idea" — seems to be apocryphal at best; somebody likely said it, but it looks like it wasn't Gandhi. You've got to take these things with a pinch of salt, as even famous wits were prone to claiming other peoples' retorts as their own — hence the painter James McNeill Whistler's response to Oscar Wilde's wistfully saying, "I wish I had said that" about a smart remark. Whistler replied, "You will, Oscar, you will."

If you're the type who only thinks of the perfect response to an insult long after you've left the building — a feeling the French call l'esprit de l'escalier, or the spirit of the staircase, for the inspiration that seizes you on the stair on the way out of the room — then this list of the 12 best ripostes of all time may inspire you. At the very least it'll inspire some Oscar-type envy. We all wish we'd said that.

1. The One About Poison

Nancy Astor, the first woman to sit in the British House Of Commons as a member of Parliament, was a famous antagonist of the British politician Winston Churchill, and they sparred on everything. He didn't like her entry into Parliament and she hated his politics, and they had so many poisonous exchanges that they culminated in this thunderous dialogue:

Viscountess Astor: "If I were your wife, I would poison your tea."

Churchill: "Madam, if I were your husband, I would drink it."

2. The One With The Double Burn

In February 1839, Henry Clay, a statesman running for president, declared his priorities about truth to the U.S. Senate, in what would become a famous line. The politician Thomas Brackett Reed was not impressed. Whether he made his riposte to Clay himself or to a person who relayed it to him isn't clear, but the response is clear enough.

Clay: "I would rather be right than be president."

Reed: "The gentleman need not trouble himself. He'll never be either."

3. The One That Got Theatrical

The playwright George Bernard Shaw was renowned for his wit, but he got a perhaps unexpected comeuppance in a telegram exchange with Winston Churchill.

Shaw: "Am enclosing two tickets to the first night of my new play. Bring a friend. If you have one."

Churchill: "Cannot possibly attend first night, will attend second. If there is one."

4. The One With The Double Burn

John Montagu, the 4th Earl of Sandwich and a politician, apparently invented the sandwich, but is also famous for an exchange he had with Samuel Foote, a comedian and theatre manager. The "certain disease," in case you're wondering, is syphilis.

Montagu: "Pray Sam, which do you think will happen to you first, the experience of a certain disease, or an intimate acquaintance with the gallows?"

Samuel Foote: "Why, that depends upon circumstances, and they are these, whether I embrace your principles or your mistress."

5. The One That Put Ageists In Their Place

The ambassador and playwright Clare Booth Luce and the famous wit Dorothy Parker, pictured (who's behind so many attributed one-liners it's doubtful she had enough time to actually say them all) had a famous exchange which has now passed into history as the epitome of bitchiness. Luce moved aside to let Parker go through a doorway first; Parker's response is legendary.

6. The One That Is, Obviously, About Dicks

The battle of wits between Winston Churchill and another British politician, the leftist Clement Atlee, was famous. He once called Atlee "a sheep in sheep's clothing" and "a modest man who has much to be modest about". According to Parliamentary lore, Churchill and Atlee were once at the urinal at the same time, and Churchill deliberately stood as far away as possible.

Churchill: "That's right. Every time you see something big, you want to nationalize it."

7. The One That Handled A Whippersnapper

Debates on television bring up a lot of snappy wit — at least if all the conditions are right. They were perfect in 1986, when incumbent South Carolina Senator Fritz Hollings debated candidate Henry McMaster. McMaster, for no apparent reason, decided 64-year-old Hollings needed some medical review.

McMaster: "You should take a drug test."

8. The One That Shut It Down

Dan Quayle isn't much more than a half-forgotten punchline these days, but when Quayle ran for the vice-presidency in 1988 he was the subject of a lot of attention — and some pretty smart lines. Quayle didn't have much experience, but chose to draw parallels between himself and Jack Kennedy, a fact that his challenger in a televised debate, Senator Lloyd Bentsen (pictured), seriously didn't think much about.

Quayle: "I have as much experience ... as Jack Kennedy did when he sought the presidency."

9. The One That Got Ugly

If you think debates these days get ugly, you should have been around during the beginnings of Abraham Lincoln's political career. He had seven fairly ferocious public debates with U.S. Senator Stephen Douglas in 1858, and at one point Douglas called Abraham Lincoln "two-faced."

Lincoln: "I leave it to my audience. If I had another face, do you think I would wear this one?"

10. The One About Having A Cabbage Thrown

Wilde was renowned for his witticisms. This was a man, after all, who once turned up at U.S. Customs and announced he had "nothing to declare but his genius," which the TSA these days would probably find highly alarming. He displayed the quickness of his wit on one (alleged) occasion when taking a bow after a performance of The Importance Of Being Earnest. Somebody apparently threw a rotten cabbage; Wilde was not bothered.

Wilde: "Thank you, my dear fellow. Every time I smell it, I shall be reminded of you."

11. The One That Was Mutually-Assured

Oscar Levant, the comedian, pianist and composer, and George Gershwin (pictured), who composed some of the most famous standards of all time, had a friendly and fractious relationship. Both were successful (though Levant only produced one breakout song, Blame It On My Youth), but they had one particularly prickly exchange at a party, with Gershwin definitely coming out the winner:

Levant: "George, if you had to do it all over, would you still fall in love with yourself?"

Gershwin: "Oscar, why don't you play us a medley of your hit?"

12. The One About Pronunciation, Darling

The American blonde actress Jean Harlow met Countess Margot Asquith at a garden party she was hosting. A story then rapidly circulated that Harlow, attempting to be funny, mispronounced Margot's first name (usually said "Margo") as Mar-GOT, to rhyme with "harlot." Margot, however, was having none of it.