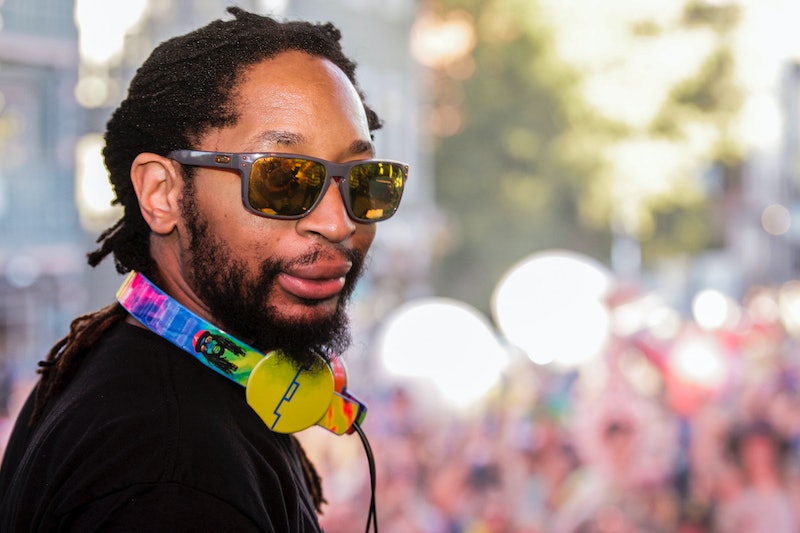 #TurnDownForOx. That was a hashtag Oxford University students saw on Twitter on May 11, and for good reason. Lil Jon addressed Oxford students on race relations in the United States as a guest lecturer. Though Lil Jon admitted he was surprised to be invited to speak at the college, he was happy to indulge the students with a Q&A session. And like the hashtag implies, he certainly did turn down his partying side. But he turned up his political side and added in some humor.

On Obama's administration, he said,

I think Obama's done a great job. It takes time to restore an old historic car - you can't just do it overnight. That's how I look at the administration that came before Obama. He put a new engine in it, he put some new rims, got a paint job. He's criticized, and at the end of today it's because he's black. The numbers don't lie - unemployment is down, Obamacare is a great thing.

It might be strange to compare a political administration to car restoration, but it is an interesting analysis that could be accessible to young people. Even if they were not much into politics, or specifically American politics, the comparison is one students could relate to, and probably get a good chuckle out of in the meantime. And really, Lil Jon being asked to lecture on these harder hitting topics is not all that surprising if you think about it, even though he himself may have been shocked about it. After all, this is coming from the same artist who made a humorous "Turn Out For What" video to promote voter turnout for youth in the 2014 election based on issues that were important to them.

The King Of Crunk also shared his thoughts on reality television shows, particularly those that are based in Atlanta, his hometown. And his thoughts were much less positive than his opinion on the Obama administration. He said,

I hate them shows. They're not real. I can't understand why people watch them. People are acting wild and crazy. I don't like the way it represents black folks in general.

Though much has been said about reality television in general over the years, mostly about how how far removed from reality it actually is, it is interesting that he zoomed in specifically on the portrayal of black people. After all, minorities are not nearly as represented on TV as whites, so it makes sense that some of these reality shows could be a cause for concern. If people watching these shows have little experience with minorities outside of the series, it could potentially shine a bad light on the entire community for that viewer. It's good for Lil Jon to give us food for thought on today's entertainment.

And in terms of his own work as an entertainer, he did not shy away from sharing his own process, especially when it comes to taking care of his very famous performance voice:

I project from my diaphragm, not my throat. "YEAH." Y'all waiting on that?

Good way to make sure they're all alert and paying attention! It seems like Lil Jon kept the students entertained — always a surefire way to get young people interested in serious issues he touched on.