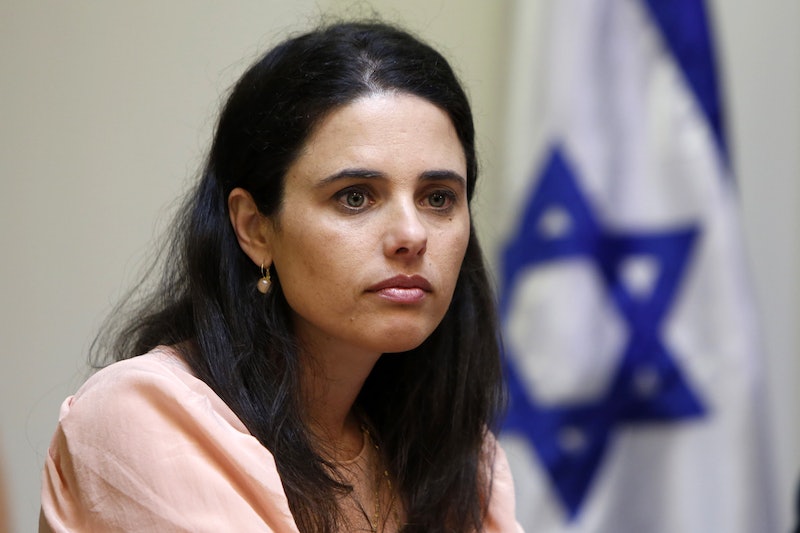 Since her appointment was announced last week, Israel's incoming Justice Minister Ayelet Shaked has been sharply criticized. That's to be expected from her ideological opposition, sure. But rather than sticking to the policy, Shaked's critics have resorted to baseless sexist remarks. Shaked, perhaps, could be a cautionary tale for feminists in the U.S. and everywhere — we need to learn how to support all women, even those on the right.

Shaked is aligned with the extreme right in Israel. She's also young and attractive, and she is continually accused by her critics of being nothing more than a pretty face. Is any of this sounding familiar? The similarities between Shaked and right-wing U.S. politicians like Carly Fiorina and Sarah Palin are undeniable, as a recent Haaretz report notes. And, much like Palin, there are plenty of reasons for the left to criticize her — but they can't resist doing it without calling attention to her looks.

According to Haaretz, former Israeli cabinet member Joseph Paritsky wrote on Facebook, "Finally, we have a justice minister worthy of being featured on a calendar in an auto repair shop."

He later clarified by saying that he was justified in saying that because the computer programmer and politician had, at some point, posed for fashion shoots. So that totally negates and/or trumps anything else she's done. Right?

When male politicians are insulted in the media, it rarely stems from their personal lives. Yeah, political scandals or policy foibles are fair play, but dragging in family or their looks is apropos. For women? Everything's an open book, especially if they're attractive.

The awful tendency for a powerful woman's looks and experience to become a target should make us take a good, long look at elections in the U.S. When Palin entered the national stage in 2008, she was lambasted for everything from her parenting decisions to her clothes. She was referenced as a cheerleader and a Barbie doll more than she was as a politician.

This is particularly pervasive toward female politicians on the right. According to a 2013 poll, only five percent of Republicans identified as feminists. That compares to 32 percent of Democrats and 19 percent of independents. That's probably surprising to exactly 0 percent of people, given that the GOP's platform sets itself up as decidedly anti-women.

But just because a woman does not hold the same principles of feminism as you do doesn't mean that sexist treatment should be tolerated. ("The War on Women is shameless, baseless propaganda," Fiorina has said on CNN.) Hell, even if a woman doesn't consider herself a feminist, she shouldn't have to face sexist treatment. That's not what the fight is about.

Zehava Galon, a leader of Shaked's opposing party, took to Facebook to vent her frustrations after a gossip column published a sexist remark about Shaked.

[It] sends a message to women and girls that it doesn’t matter how much they succeed, even when they receive a top ministerial post in the government - they will be judged first and foremost on their physical appearance … I intend to stand against Ayelet Shaked in every effort she makes to weaken the Supreme court and harm Israeli democracy. But when it comes to how she is treated as a woman and when it comes to remarks that diminish and insult her that she is forced to endure, I will stand beside her.

So challenge yourself to think as the 2016 election cycle rears its sexist head, would that remark made about Carly Fiorina bother you if it was made about Hillary Clinton? Or vice versa? You don't have to vote or support female politicians' platforms because they are women. But when it comes to standing up against sexism, let's put ideology aside.