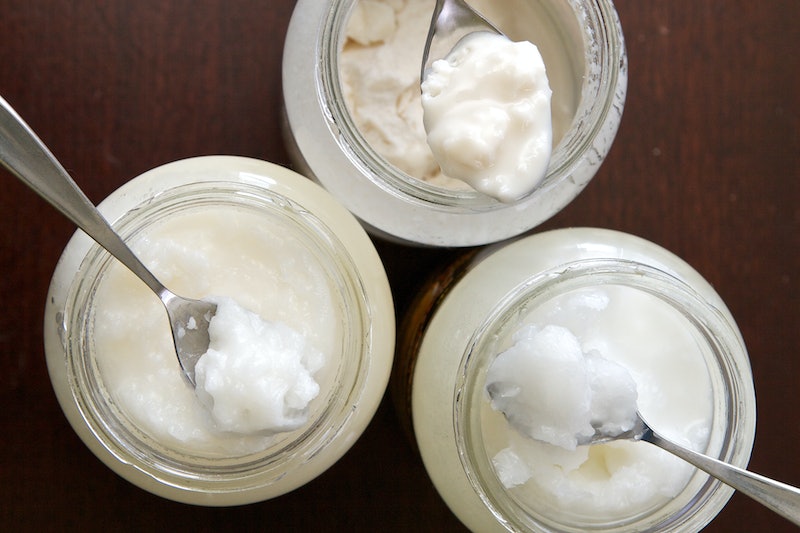 I purchase literal pounds of coconut oil monthly, because my worst nightmare is running out of coconut oil when I truly need it the most. It's not just the fact that my hair and skin LITERALLY cannot survive without it; it's that coconut oil has surprising benefits that you've probably never heard before. This stuff goes far beyond keeping our bods and scalps moisturized, something the entire world is slowly starting to catch on to. Regular intake of coconut oil can be give you the health benefits that you may be lacking in your regular diet. Due to the unique fatty acids, protein, copper, and vitamin C of coconut milk, studies are constantly being done to prove this natural oil as a natural healer.

According to sources at One Green Planet, coconut oil isn't just beneficial for humans. If your pup is eating grass (which usually means he/she is looking for a way to soothe painful tummy aches), add a teaspoon of coconut oil to ease digestion pain. Seriously, my husky will literally eat anything it finds on the ground or floor (including long-dead rodents, unfortunately), meaning she basically always has a stomach ache. Coconut oil can ease you AND your pet's digestion problems — along with a crapload of other things.

Even if you're already a coconut oil superfan, here are 12 more benefits of the natural ingredient that you've probably never heard of. And yes, I've tried them all.

Coconut oil can be used to relieve the pain and inflammation of a sty because it's anti-inflammatory.

2. It makes a great tattoo ointment.

Many tattoo artists agree that coconut oil is a great tattoo ointment. It's moisturizing, healing, and won't suffocate the tattoo, which helps keep the color bright.

Coconut oil is amazing for controlling frizz, since it acts as both a moisturizer and a sealant. That means it gets between your hair and dryness which can lead to the frizzies.

4. It may prevent yeast infections — and definitely makes them suck less.

5. It'll amp up your sunscreen.

While you definitely need something with a heavier SPF in addition to coconut oil before going out in the sun, you can combine it with your favorite natural sunscreen to give it some extra oomph, since coconut oil has a (low) natural protection factor. Plus, you can sooth redness and irritation by applying coconut oil after a day in the sun.

6. It may prevent migraines.

Many natural bloggers swear by eating coconut oil to help reduce migraines because of the fatty acids that are good for your brain. There's no scientific proof behind this theory (yet), but it's so delicious, you might as well give it a go.

7. It's a gentle makeup remover.

Coconut oil can help you remove stubborn eye-makeup and foundations without drying out your skin. It's nourishing and moisturizing, so you can rest assured that those days of waking up with mascara stuck to your eyes are behind you.

8. It works well as a makeup primer.

I've rarely used a primer without feeling either smothered in makeup or having a major breakout. Coconut oil is a great way to set your makeup without having to worry about putting extra stuff on your face. This natural primer will keep your makeup lasting longer while moisturizing your skin and preventing wrinkles.

9. It can stop bleeding gums.

Typically, brushing too hard or waiting too long in between teeth cleanings can lead to bleeding when you brush, and I've found that using coconut oil for oil pulling can remedy that. Oil pulling has been used in Ayurvedic medicine for oral health and coconut oil is one of the best for dental health.

10. It may slow signs of Alzheimer's.

Again, those fatty acids are good for your brain, so there have been some accounts of families who claim to have seen an improvement in a loved one suffering from Alzheimer's after they add coconut oil to their diets. The National Institute On Aging is in the process of recruiting participants for a study to prove (or disprove) this for sure, but there's still no doubt that coconut oil makes for a healthier diet regardless.

In about two months, I will be covered in bug bites from head to toe. Bugs love the essential oils and natural food that I wear on my body daily, but fortunately those bites never get out of control because coconut provides an anti-itching relief that makes them easier to heal and alleviates redness. Thanks, coconut oil, for literally solving all of my problems.