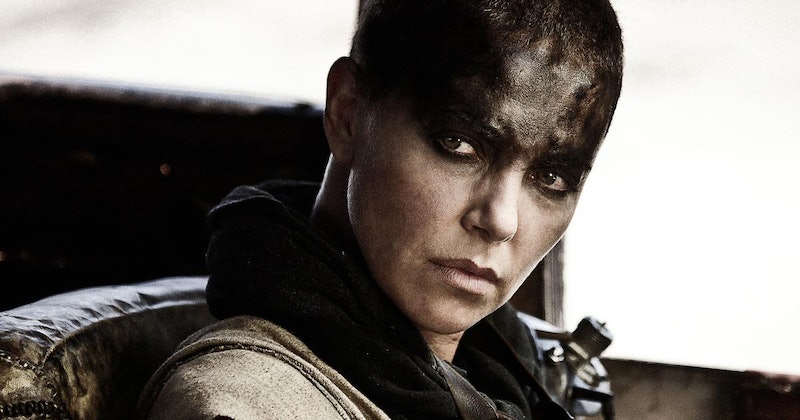 According to Tom Hardy, director and creator of the Mad Max universe, George Miller, crafted the post-apocalyptic genre. And he's right. Some 40 years ago, the character of Mad Max was born, and with him came a company of jaw-dropped filmmakers, anxious to utilize what they'd seen in Mad Max for their own work. Some of the most admired filmmakers of our generation — Guillermo Del Toro, David Fincher, and even James Cameron — credit Mad Max 2 as a film that had a major influence their work. Even shows like Rugrats and singers like Ke$ha (when she still had the dollar sign in her name) have parodied Max and his bleak, destroyed world. “I have this cool, intergalactic spaceship thing going on,” she says. “It’s got a post-apocalyptic Mad Max vibe," the singer said of her 2011 tour.

But in 2015's Mad Max iteration, our story no longer follows Max. Yes, he is a familiar face and our guide into the dusty world Miller has created, but there's no longer patience for his silent and brooding ways. The world has ended, survival is a day to day challenge, and it's time to get shit done. Enter Furiosa (played by Charlize Theron), a road warrior who has seen her share of hard times and is ready for change.

When we meet Furiosa for the first time, she is driving a war rig full of young, beautiful women — all wives of the tyrannical leader Immortan Joe. She has kidnapped the women, one of whom is pregnant, and hopes to escape with them to somewhere called the Green Place, a sanctuary she remembers from childhood. It is important to note that women under the leadership of Joe serve two purposes: to bare children and to give milk for the consumption of humans. It's disgusting, and it's supposed to be. George Miller begs the question, how do we treat women? And how do we treat women when the world has ended?

Theron's Furiosa has a compelling backstory, one that goes unexplained in the film, but was shared via Theron herself at the LA press day for the film. She explains that Furiosa was taken as a small child, thrown into a breeding program, and ends up baron. A woman who is unable to bare children or produce milk is a throwaway in the eyes of Joe. She is discarded, and now, attempts to take advantage of her job as a War Rig driver to smuggle imprisoned wives from the Citadel. Max, who's sole goal is to survive — alone — has a far less noble cause. And when the two cross paths and join forces, Furiosa stands out as our hero, and Max is simply her helpful but decidedly less important side-kick.

When Furiosa reaches the Green Place [Minor Spoilers ahead], it is no longer the lush landscape she remembers. It's baron and lifeless, with nothing green as far as the eye can see. But about a dozen women still live in the region, and when they see their long lost sister Furiosa, they ban together in the name of sisterhood. In a world where all you can do is survive, there is no time for empathy or compassion, yet these women find it together. Several scenes in the film feature only Furiosa, the wives she's rescued, the women of her past, and the lone male Max — who naturally falls into the background.

When the ultimate battle between good vs. evil, Joe vs. the girls plus Max, plays out, it's the women — old, young, inexperienced, strong — who risk their lives for their fellow woman. They are capable and angry, weathered and weak, but entirely real. They aren't carved out of the same material that formed Lara Croft or her unnaturally sexy and tough counterparts. Yes, the wives appear in barely-there getups, but only because Joe adorned them with his male gaze. There are no push-up bras or lipgloss for women warriors in the desert landscape.

"We’re seeing in the world in many places that women are emerging as a unifying or healing force in the world," says director George Miller. "I think that’s in the zeitgeist." But while audiences are being spoon-fed a girl power ode laced in souped up electric guitars and filtered through a dusty, Lo-Fi-esque lense, they won't necessarily know what they signed up for when they buy a ticket to the film. Cleverly hidden amongst the chases, fight sequences, explosions, and bad guys is a feminist anthem.

The film is bookended by narration from Max — he offers a short — very short — explanation detailing where he came from (he's an ex cop) and what's happened to him (he lost his family), and then we move on. We've seen Max's story before, and 2015 doesn't need an insane wanderer, we need a strong and capable warrior named Furiosa. Because just like Furiosa needs to save half a dozen innocent women from the clutches of evil Immortan Joe, audiences need to be saved from yet another male-dominated action flick.

More like this
The 'Spiderhead' Movie Ending Is Nothing Like The Short Story It’s Based On
By Morgan Leigh Davies
16 Novels That Paint A Realistic Portrait Of Abortion
By K.W. Colyard
At 14, Jenny Han Wrote Rom-Coms About Her Friends & Fan Mail To Leo DiCaprio
By Alyssa Lapid
10 Must-Read New Books Out This Week
By K.W. Colyard
Get Even More From Bustle — Sign Up For The Newsletter