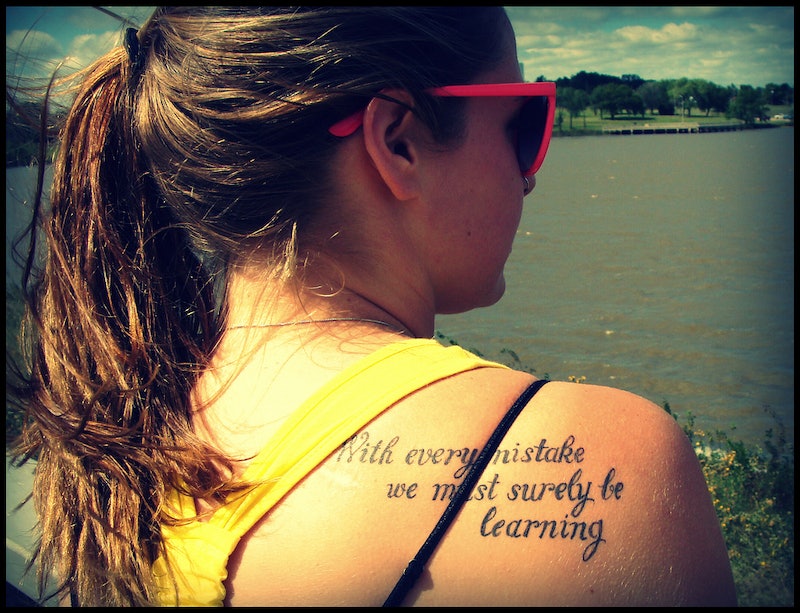 Every one of us has, at some point in our lives, done something really stupid. I mean, really stupid. Come on, I’m sure you’re remembering it right now: The decision that makes you cringe a little when you think about it; the one you hope to God no one will bring up ever again (er, sorry). We’ve all been there. Mistakes can be awkward at best and traumatic at worst, but it’s important, as we get older, to realize that we are only human, and that humans are mistake-making machines. I know it’s a total cliché to say that mistakes are learning experiences—and very irritating when someone tells you so just as you’ve done something really embarrassing—but sometimes clichés are clichés for very good reason.

After all, what are mistakes for, if not to teach us how to act (and not act) in the future? From a very young age, we learn through bad decisions. Like when I was little and my mother told me not to put my hand on a hot burner, and I pressed my hand right on it anyway (because that’s what small children do). It was stupid and painful, but you can bet that I learned to keep my hands away from the stove.

Of course, as we get older, mistakes and the lessons we learn from them are more complicated than that. We make career decisions we regret, and bad choices about romantic partners, and the fallout is a lot more painful than a scorched palm. But we learn from those experiences, too, and become smarter, more mature, and more resilient as a result.

Take a moment to think about the mistakes you’ve made, and how they’ve changed you. Have they made you smarter, stronger, and generally more awesome? I bet they have. Keep reading to find out how.

Accepting that you’ve made a mistake is tough. It’s common to try to retroactively rationalize a mistake to make the negative outcomes of our choices seem like positives (a behavior known as choice supportive bias) and to try to blame external forces for our own failures. It’s painful to admit that we’ve done something wrong, and thus not surprising that most of us tend to shy away from looking at our mistakes too closely. But you can’t learn from a mistake until you recognize that it is a mistake—one for which you are responsible.

2. You don’t let the fear of failure keep you from trying new things

We’ve all heard the saying, “There is no success without failure,” but you know firsthand that it’s true. You know that, by doing new things, you risk making a mistake, but you also open yourself to the possibility of creativity and innovation.

3. You know that your mistakes don’t define who you are

When you make a major mistake, it’s easy to feel like that failure defines your whole life, like somehow you’re tainted forever by it. By now, however, you’ve learned that everybody makes mistakes and that your mistakes don’t define you. You feel secure in yourself and know that you have something valuable to offer the world, even though you’ve failed from time to time.

4. You take the time to think through your decisions

Your past mistakes have taught you that behaving rashly and without thinking can easily lead you off course. You know now that whenever you have an important decision or choice to make, it’s important that you give yourself time to think about your options and the consequences of your actions. Of course, it’s impossible to always know if you’re making the right choices, but at least you know you’ve done your best to do so.

5. You accept that you can’t control everything

Experience has taught you that, even when you game out every aspect of a decision, mistakes still happen, and that’s OK. You know that you can’t control everything, and you’ve accepted that sometimes things simply don’t work out. You don’t beat yourself up for mistakes you couldn’t have predicted or prevented.

6. You know that things really will be OK

When you first make a mistake, it’s easy to feel like the world is ending: You screwed up, and now everything is ruined FOREVER, right? With some experience under your belt, you now realize that, even when you mess up royally, the world continues to turn and life moves forward. Yes, you may have to face some unpleasant consequences, but you know that you’ll get through it. Just knowing that you’ll make it through somehow can give you the courage to keep taking necessary creative and emotional risks.

You know that you’ve made mistakes and that these mistakes have had negative consequences, but you don’t sit around beating yourself up over them. You’ve done everything you can to fix things, but you’re also able to move forward and forgive yourself, knowing that this won’t be the last time that you do something wrong. After all, you’re only human.

Recognizing and moving on from your own mistakes has given you enough perspective to realize that other people also make mistakes, and they, too, deserve to forgiveness. That doesn’t mean you never get angry when someone you know makes a bad choice. It does means that you do your best to sympathize with that person and help him or her learn from what has happened.

9. You can laugh at yourself

Being able to laugh at your own mistakes is a major mark of maturity. It may be hard to see the humor in a mistake that is fresh and hurting, but, with a little distance, you’re able to cut yourself a break and laugh a little. That ability to laugh at yourself will go a long way in making future mistakes—both yours and others people’s—a little more bearable.