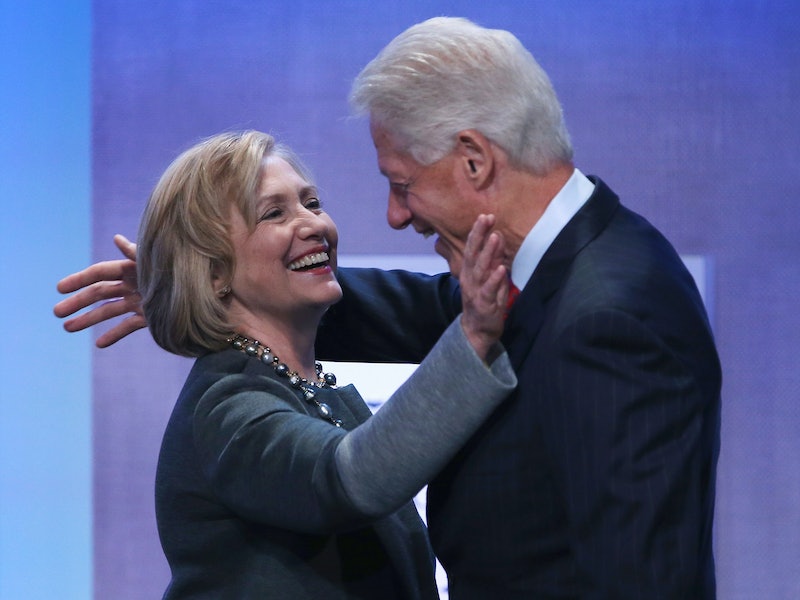 Tuesday marks the one-month anniversary of Hillary Clinton's presidential announcement, and she's already deep in the campaign trenches just 30 days in. From continued pressure to turn over emails on her private server to pressure from the left to oppose Obama's Pacific trade deal to pressure from the media to answer more questions, Hillary has been, well, under a lot of pressure. But even in her most hectic times, she has a constant source of comfort to rely on: her husband and rock, Bill Clinton. When everyone else looks at her as a way to fulfill their own agendas, Bill looks at Hillary for who she is, a love that's reflected in Bill Clinton's many quotes on Hillary Clinton through the decades.

From the day they met at Yale Law School in 1971, Hillary and Bill have been partners through thick and thin. She stood by him through his presidential terms, which were marred with a national extramarital affair and equally high-profile impeachment attempts. And now he's standing by her as she makes her second attempt at becoming the first female president of the United States. Through the years, they've had nothing but praise for each other.

No one understands me better, and no one can make me laugh the way Bill does. Even after all these years, he's still the most interesting, energizing and fully alive person I have ever met. Bill Clinton started a conversation in the spring of 1971, and more than 30 years later we're still talking.

They're still talking indeed, and this is what he's said about her.

Bill has been smitten ever since he first laid eyes on Hillary at Yale in 1971. In his 2004 memoir My Life, Bill describes what sounds like love at first sight:

She had thick dark blond hair and wore eyeglasses and no makeup. But she conveyed a sense of strength and self-possession I had rarely seen in anyone, man or woman. ... She was in my face from the start, and, before I knew it, in my heart.

She could be president someday. She could go to any state and be elected to the Senate.

When Hillary was accused of misconduct in the Whitewater scandal, Bill came to her defense, telling The New York Times in 1994:

I believe I'm a better authority than anybody else in America on my own wife. I have never known a person with a stronger sense of right and wrong in my life — ever.

In a 2007 speech during Hillary's first presidential campaign, Bill repeated something that he had once told her at Yale:

I have met all the most gifted people in our generation and you're the best.

When commenting on Hillary's work with the Clinton Global Initiative during an appearance on CBS This Morning, Bill said with pride:

She's been a senator of New York, with a good record, Secretary of State with a very good record. I think that her work here [at CGI] will remind people of her domestic interests and what she can do with her too-small-to-fail initiative. ... It's a natural fit for her to come to work here because when we met, a long time ago ... Hillary was already really active in non-governmental organizations. Not me, I just cared about politics. She was a walking NGO.

She Makes Him A Better Man

During the CBS This Morning appearance, Bill also credited Hillary for making him a better man. And while it might be tiring at times, they still know how to laugh together.

Now you know, Hillary is on a constant self-improvement project. You know, she's always trying to improve me, so I'm having to get used to being improved more regularly. She's just on me all the time to sort of tone up my exercise program or do this or do that.... But we ... have so much fun. We still have a lot of fun together.

During her first campaign, Bill addressed the traits that make Hillary unique and summed up her qualifications as president quite emphatically, telling a crowd in New Hampshire:

I can't make her younger, taller, male, there's a lot I can't do. But if you want a president and need one, she would be by far the best.

More like this
Iran Has Issued A Death Sentence Over Mahsa Amini Protests
By Catharina Cheung, Darshita Goyal and Maxine Harrison
'Waterloo Road' Is Back, With More Than A Few Familiar Faces
By Sam Ramsden and Vivian Iroanya
Amanda Gorman Shared A Powerful Message On Meghan Markle’s Penultimate Podcast
By Darshita Goyal
Claire Foy & Rooney Mara Revisit A Devastating Tale In 'Women Talking'
By Bustle UK
Get Even More From Bustle — Sign Up For The Newsletter