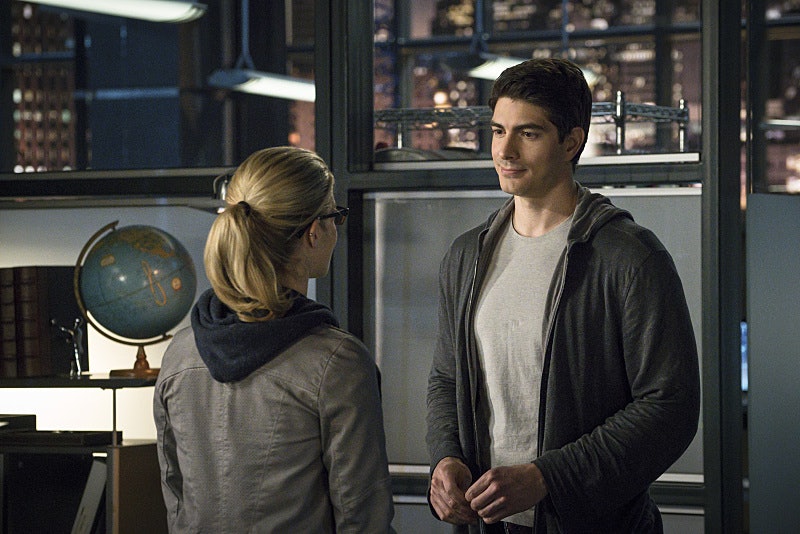 Flying our way this fall will be so much more Atom and that's a great thing. Brandon Routh joined Arrow this season as Ray Palmer, and he quickly started stealing the show right out from underneath Oliver Queen — he also stole Felicity's affections for a while there too. He's made such a splash as a second billionaire vigilante in Starling City that Ray will star in the upcoming spinoff Legends of Tomorrow . But does this mean Ray will leave Arrow after Season 3?

The answer is, sadly, yes. Ray's leaving Arrow. In an interview with The Hollywood Reporter, executive producer Marc Guggenheim said, "Ray's [Brandon Routh] last scene, which is a very definitive sendoff, was actually something we talked about way back at the beginning of the year, long before the spinoff was discussed. While Ray's sendoff does a nice job of teeing up where he is headed in the spinoff, it was always something we were going to do."

If you think about it, there was never enough room in Starling City for both Ray and Oliver, and weren't we pulling for more Ray-centric stories, anyway? He's a great character and quickly became one of my favorites. Slowly, his story has run its course on Arrow, and now that he and Felicity aren't together anymore, and now that his super-suit is operational, it's time for him to fly away and do other things.

However, don't think of this as goodbye. Think of this as, see you later, Ray Palmer. That's the great thing about this world that the CW has created — it's all intertwined. Just because Ray's leaving Arrow doesn't mean we'll never see him and Oliver (and Felicity and Laurel and Diggle) together again in the future. It just means we'll get see more of him as an individual character on Legends of Tomorrow. Think about how exciting it is every time Barry Allen shows up in Starling City, and every time Oliver has shown up in Central City. This trend will more than likely continue with the third show in the DC television universe, and that's what we can really be excited about for the fall.

While we know we'll see Ray again at some point, there's not much information about Legends of Tomorrow available right now. The logline for the series reads: "Rip Hunter travels back in time to the present day where he brings together a team of heroes and villains in an attempt to prevent an immortal from destroying the world and time itself." Sounds like a group of super humans and their billionaire BFFs teaming up to save the day. But right now, we don't know when it's going to happen. It takes place in the same world established by Arrow and The Flash, but does it actually take place in the same time frame? That's the big question.

More than likely, the events on all three shows will line up perfectly, but I could see the show jumping into the future a little bit (I mean, only because Harrison Wells is currently trying to destroy the world in hopes of getting back to the future on The Flash, and I just feel like there can only be so many people trying to destroy the world at once, you know?). It might even be interesting to some events on Arrow and The Flash set up Legends of Tomorrow, and then pick back up on the spinoff. We won't know for certain what exactly will happen yet, but at least I can sleep better at night knowing it has a place in the 2015-2016 television schedule.

Even though we won't get adorkable Ray Palmer moments on Arrow anymore, at least we'll see him being adorkable all the time on Legends of Tomorrow. Maybe he'll even find a fellow adorkable vigilante to spend his life with. But no matter what, more Ray Palmer is never a bad thing.