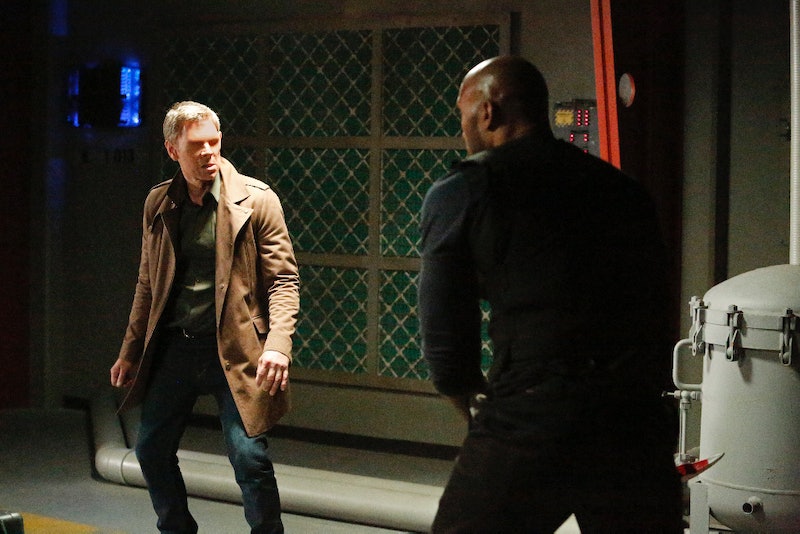 The Marvel universe is about to get a lot more populated with powered people, y'all! Something's in the water, or rather, the fish. Stay away from Omega-3 supplements, because Skye inadvertently released a whole bunch of terrigen crystals on Agents of S.H.I.E.L.D. into fish oil pills. This is now an epidemic. I can't wait to see how it plays out on Agents of S.H.I.E.L.D. Season 3. Are some people going to take these pills and turn to dust, while others sprout gills and/or heat vision? That's going to be a headache for the Food & Drug Administration.

Jiaying harvested the crystals and intended to use them as weapons. At the climax of the episode, Skye pulled a Luke Skywalker and sent the Quinjet carrying them into the ocean, which seemed like a good move. It prevented Skye's Inhuman mother from releasing the mist like a bomb and killing those who were not worthy descendants.

However, the tank emptied underwater and the mists were released into the ocean. They got into a school of passing fish, who were caught and turned into fish oil supplements.

Maybe the diviner metal was filtered out in the ocean. This isn't a real scientific phenomenon, so the rules aren't clear and could change at any moment. Maybe this underwater spill was the secret ingredient to removing the diviner metal and the fish oil pills will only activate Inhuman powers, not kill people. Otherwise, that product is going to need to be recalled fast.

What I still don't understand is why Jiaying was so gung-ho about carefully selecting descendants for the Terrigen mist in Afterlife, yet seemed pretty willy-nilly about it when it came to waging a war against S.H.I.E.L.D. and those who fear the Inhumans. What was the point of the background checks? Was this just a risk she was willing to take?

It's too late now. The Terrigen is out there and we won't know the extent of its damage until Agents of S.H.I.E.L.D. returns. In the meantime, I'll still be staying away from fish products — just in case.