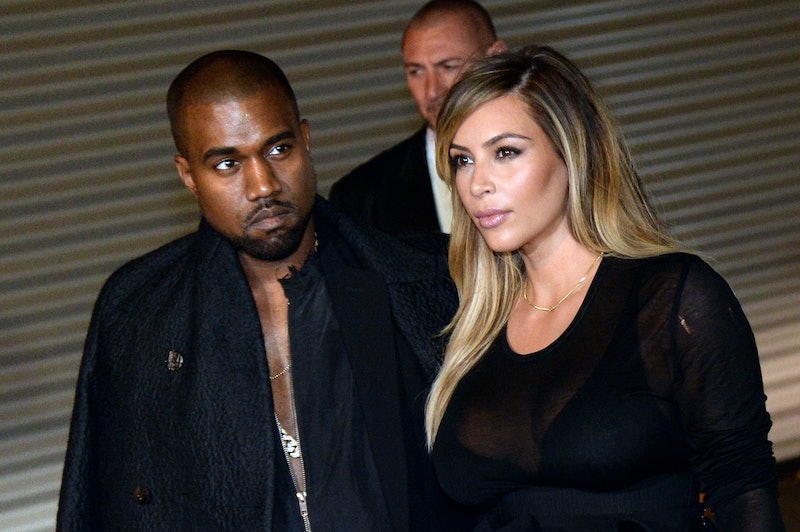 Oh, Kim and Kanye. Ever the prime example of having so much money that you don't know what to do with it. Maybe I'm being a little bitter upon hearing that Kanye West sent Kim Kardashian a few thousand white roses to her hotel room and also surprised her at dinner with a string quartet playing Sam Smith songs for Mother's Day. Meanwhile, trying to get a single flower from a dude you're dating in NYC is like the most covert and impossible operation known to man — but I digress. West and Kardashian are obviously no strangers to luxury and extravagance, and many of their gift choices for each other support this fact.

But extravagance doesn't always mean spending tons of money, my friends. Kanye West does indeed have a flare for the unique and unpredictable, so sometimes his choices veer a little left of conventional gifts for your boo. Kardashian likes to keep things more traditional, but she definitely never skimps on pure lavishness because anything goes when it comes to her husband and her daughter, North.

So, in celebration of one of the most over-the-top celebrity couples, I rounded up some of the most ridiculous gifts that West and Kardashian have given to each other, because since they've got the means, they really go for it.

For Kardashian's 34th birthday, West commissioned a world renowned artist to paint a $10,000 Hermes purse, Jackson Pollack style. Actually, no. West invited their daughter North to go to town and create a little masterpiece. What ever happened to construction paper? Kardashian told Us Magazine, "I had thought it was this new artist who had painted this purse... [But] it was my daughter. It was amazing."

Vintage Autographed Mice From The Creators Of Apple

Remember that time West ranted, "I am undoubtedly, you know, Steve of internet, downtown, fashion, culture. Period." He was referring to his hero Steve Jobs, so for his birthday in 2013, Kardashian decided to give West two computer mice autographed by Jobs and Apple co-creator Steve Wozniak. Oh yeah, and they also got to meet Wozniak in person.

Because what else would Kanye West besides than a birthday cake with his name on it?

Rumors circulated last year that West bought ten Burger King franchises so his girl could expand her empire even further, because who doesn't love french fries? West himself owns a few Fatburger chains in Chicago, so maybe we've got a new family business in the future.

In 2012, Kardashian bought her then-boyfriend a rare $750,000 Lamborghini Aventador LP 700-4 for his birthday. I don't know what any of that means but I know it's expensive, it looks like a Batmobile, and I'm gonna go cry now.

Kanye West is really into defacing Hermes bags. As a Christmas gift, the rapper gifted his wife a Birkin bag worth an insane amount of money. But not just any Birkin bag would do for him. He hired contemporary George Condo to paint on the purse and the result was rather terrifying if you ask me. Whatever floats your boat, I guess.

In 2012, Kardashian was off to Miami to film her reality show, Kourtney and Kim Take Miami, and West surprised her with a beautiful white kitten named Mercy. The teacup Persian didn't stay with Kardashian long — she discovered she was allergic and gave the cat to her assistant, but little Mercy died of a virus at only four months old. :(

Sometimes the simple things really make the most impact. For his 37th birthday, Kardashian got her hands on a My Monopoly board, which wasn't even out in stores yet. She customized the board completely, and replaced the classic Park Avenue and Broadway spaces with locations near and dear to the couple.

A Wall Of Flowers

We know that West got his girl thousands of roses this year for Mother's Day, but he kicked off the tradition on Mother's Day last year. He surprised Kardashian with a wall of roses, peonies, and hydrangeas and it was really, really beautiful.

Can't wait to see what else these two have in store in the years to come!