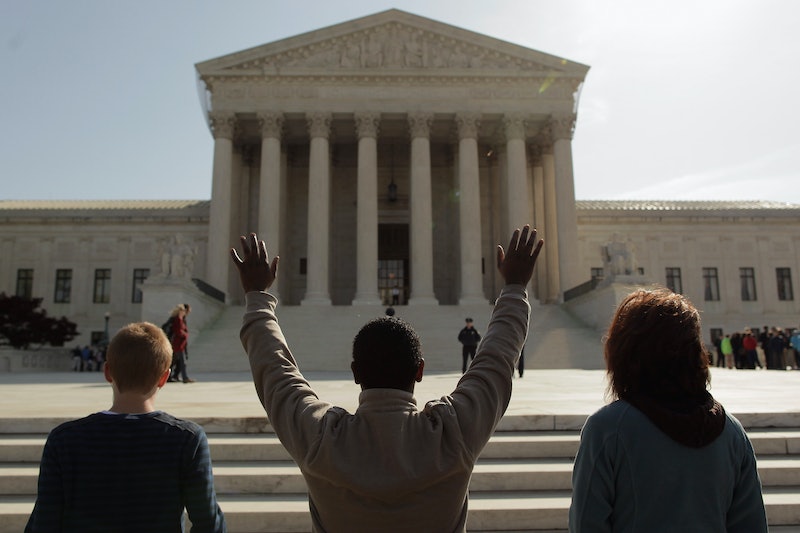 The U.S. House of Representatives will vote on a 20-week abortion ban Wednesday, four months after Republican Congress members withdrew the bill from the House floor following harsh criticisms from within their own party. Those initial criticisms stemmed from the bill's provision mandating survivors of rape and sexual abuse to formally report the crimes against them — as a way to seemingly "prove" their rapes and sexual assaults — in order to receive an abortion after 20 weeks of pregnancy. The bill's sponsors promise this latest draft is totally kinder to rape and sexual assault survivors seeking abortion — except it's still not the bill the majority of voters are looking for, according to reproductive rights activists and the greater medical community. (Update: On Wednesday, the House passed the bill.)

Known as the "Pain-Capable Unborn Child Protection Act," HR 36 would create a new federal ban on abortion, barring the procedure past 20 weeks "post-fertilization," or 22 weeks of pregnancy (doctors typically date pregnancy from last menstrual period, not fertilization). Variations of the bill have been in the works over the last several years, as 20-week abortion bans have become more popular among state legislatures. Currently, 10 states have an unconstitutional 20-week abortion ban in place, according to the Guttmacher Institute.

Anti-abortion groups overwhelmingly support the legislation, which they claim is necessary to protect both mothers and their unborn children in the United States. "The United States is one of only seven nations to allow abortion on-demand after this point [20 weeks," Marjorie Dannenfelser, President of Susan B. Anthony List, said Tuesday in a statement. "A large majority of Americans, including women, young people, Independents, and Hispanics support the Pain-Capable bill."

Yet opponents of the measure say this type of legislation, which would place more burdens on women who are seeking abortion because of a severe fetal abnormality, a medical condition or sexual violence, is largely unpopular with the American public.

"The message that was sent [in January] was loud and clear: Americans don't send their representatives to D.C. to waste time and money restricting women's reproductive rights," NARAL Pro-Choice America Ilyse Hogue said Wednesday in a teleconference, citing instances where similar 20-week measures were defeated by voters, such as by Albuquerque residents in 2013.

"This obsession with abortion restrictions does not represent the majority of voters...across the country," Hogue added.

"This bill would literally prevent doctors from providing the best care to their patients, and prevent women from getting the medical care that they need," added Planned Parenthood Action Fund President Cecile Richards during the teleconference. She called the bill "misguided" and "dangerous."

Aside from the blatantly unconstitutional ban on abortions past the 20-week mark, here are the most disturbing provisions of the "Pain-Capable Unborn Child Protection Act."

A Waiting Period For Rape Victims

When introduced in January — the first piece of legislation brought to the Congressional floor in 2015 — the bill made headlines for its rape provision, which stipulated that girls and women who are victims of sexual violence must report their rapes to a law enforcement agency before obtaining an abortion. The narrow provision caused an outcry among many female members of the House, including Republican Congresswoman.

Reps. Diane Black (R., Tenn.) and Cathy McMorris Rodgers (R., Wash.) spent some time hashing out the rape clause, ensuring that it wouldn't place such an over-reaching burden on survivors. However, the newly revised bill still includes some tough rules for rape survivors — in fact, Cecile Richards says is "even worse."

Under this latest draft, if survivors of sexual violence haven't reported their rapes to law enforcement officials, then they must wait 48 hours before having an abortion. Before the mandated waiting period begins, women would have to receive counseling from a facility that doesn't perform an abortion — forcing women to consult with two doctors before obtaining an abortion. Rape survivors would need to provide written documentation that

But wait, there's more: Survivors of sexual violence who are minors would still have to report their rapes to a law enforcement agency or a government agency authorized to act on reports of child abuse. Reproductive rights activists have condemned these so-called improvements, with Richards calling them "cruel and inhumane barriers" for girls and women already traumatized by rape.

No Way Out For Incest Victims

Lack Of Exemptions For, Well, Most Women

Although the 20-week abortion ban makes an exemption to prevent the death of the mother, it's unclear how the provision would affect women who need to terminate a pregnancy because of a medical condition or complication that could harm the woman's health. At this time, there's no exemption in the bill for fetuses that are non-viable or may be born with a severe defect.

Most fetal abnormalities aren't detected until around the 20-week mark, and medical complications that arise during the second trimester can be serious to a woman's health, according to Hal C. Lawrence, who serves as executive vice president and CEO of American Congress of Obstetricians and Gynecologists. "Women who need abortions in the second trimester generally are facing very complex and very painful situations," Lawrence said in a teleconference Wednesday. "If anything, this calls for more empathetic care — not persecution and restriction."

Under this new bill, doctors will shoulder more red tape when it comes to treating pregnant women in the second trimester. "There are times where you find a severe fetal abnormality or a maternal indication, where terminating the pregnancy has to happen to save the mother’s life," Lawrence explained Wednesday. "But if keeping the mother healthy ends up terminating the pregnancy — that’s something you might have to do. "