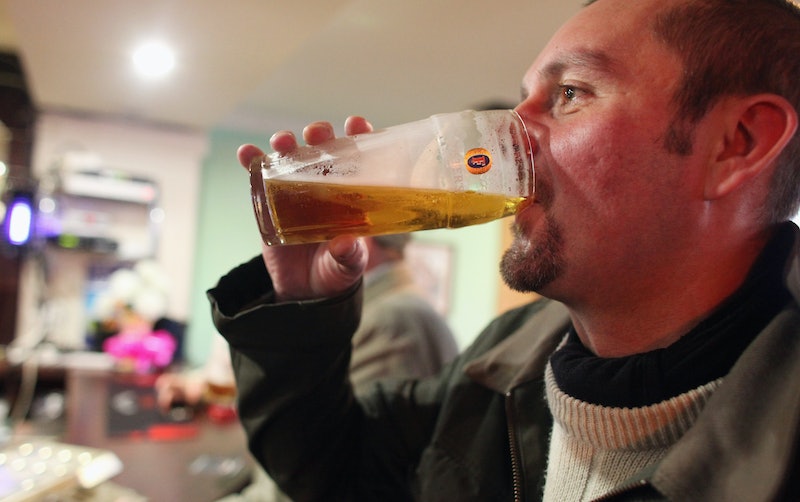 How many times has love's young dream, or a boozy night tryst, been ruined when a guy has had so much to drink he's unable to get an erection? It's no secret alcohol affects a man's sexual performance, and I've been there more than once and it's awkward. It's. So. Awkward. You don't want to say anything to make him feel bad because you know it's not his fault, but also him trying to power through and get it in anyway is cringe-worthy and uncomfortable. (Why do they think the answer is more thumb? The answer is never more thumb.) It's hard not to take it personally, to feel like you've done something wrong, but I promise it's not just you— science says blame it on the alcohol.

According to one study:

"Researchers have found that too much alcohol affects both your brain and your penis. In one University of Washington study, sober men were able to achieve an erection more quickly than intoxicated men — and some men are unable to have an erection at all after drinking." And in that moment the University of Washington discovered what frat boys everywhere have always known in their hearts. The reason is reduced blood flow to the penis during drinking. And that doesn't really seem fair— all I'm saying is lube is available everywhere, but nary a penis splint in sight...

More than a night out, chronic drinking is where the real damage is done. Erectile dysfunction, and other sexual disfunction's like delayed orgasming, are common in alcoholics. One of the reasons is the damage to the liver caused through drinking: "A damaged liver can impact on the body’s ability to regulate hormone distribution. In males, this can cause testicular atrophy, impotence and sterility." So although the random case of erectile dysfunction from a hard night of partying is nothing to worry about, if it's happening too often you may want to check your alcoholic intake and think about your liver. It could save your sex life.

More like this
13 Ideas To Add To Your Sex Bucket List
By Kristin Magaldi
35 Sexy Texts To Send Your Partner
By Griffin Wynne and Carolyn Steber
What Are Swingers? Everything You Need To Know
By Lexi Inks
GIRLI & Q Fell In Love At A Skatepark & Never Looked Back
By Jessica Morgan
Get Even More From Bustle — Sign Up For The Newsletter