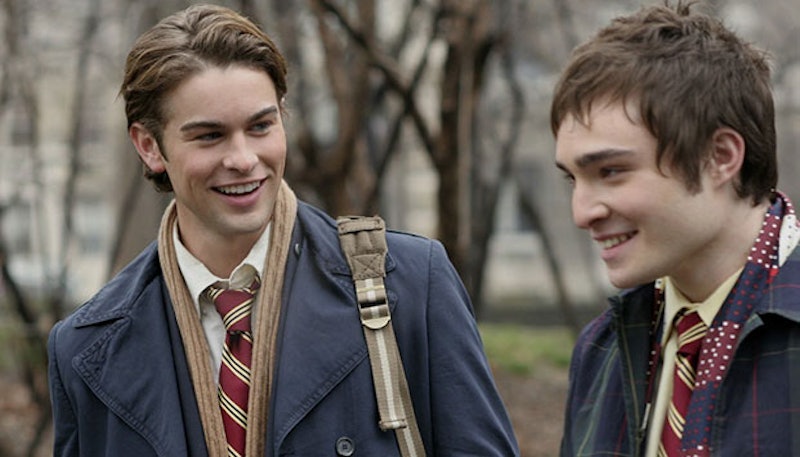 After all these years, the boys of the Upper East Side are at it again. On Tuesday, ABC released its 2015-2016 television line-up and two of the new shows star none other than our favorite Gossip Girl hotties, Ed Westwick and Chace Crawford. Even though it's not quite the reunion all us fans have been waiting for (you know, like a movie or two hour special on the show would have been ideal), it's nice to know that the boys are getting back to acting — and on the same network none-the-less. And if that doesn't get you excited, the new Twitter photo of them certainly will. Seriously, as if they weren't already gorgeous before, these guys have only gotten more attractive with age.

On and off the screen, Westwick and Crawford were super close while filming Gossip Girl back in the day. Not only did they share an apartment when they filmed in NYC, but their roles as Chuck Bass and Nate Archibald was an iconic friendship on television. Even through the ups and downs (and all the gossip and drama), these two prep school boys managed to make it through almost anything. Let's take a look at their greatest BFF moments on the show.

But first — here's the photo. Can we please take a moment to admire the matching suits?

When Chuck Would Try To Give Nate Advice

We all know the iconic speech Chuck gives Nate in the pilot. Yeah, safe to say Chuck wasn't the best person to be giving advice at the time.

When Nate Gave Chuck His Blessing With Blair

Even though they fought over the same girl, they managed to put their differences aside in the name of those three words and eight letters.

When They Helped Each Other Through Hard Times

When Chuck's dad "died," Blair and Nate were the two people at his side to help him through it.

Whenever They Would Hug It Out

Seriously, how cute are these two? I love this bromance so much.

When Chuck Would Try To Cheer Nate Up

Again, maybe not with the best of methods on Chuck's part. But hey, he was trying right?

When They Would Poke Fun At Each Other

Their playful batter was actually the cutest.

When They Would Party Together

These two were more than just drinking buddies, they were best buds.