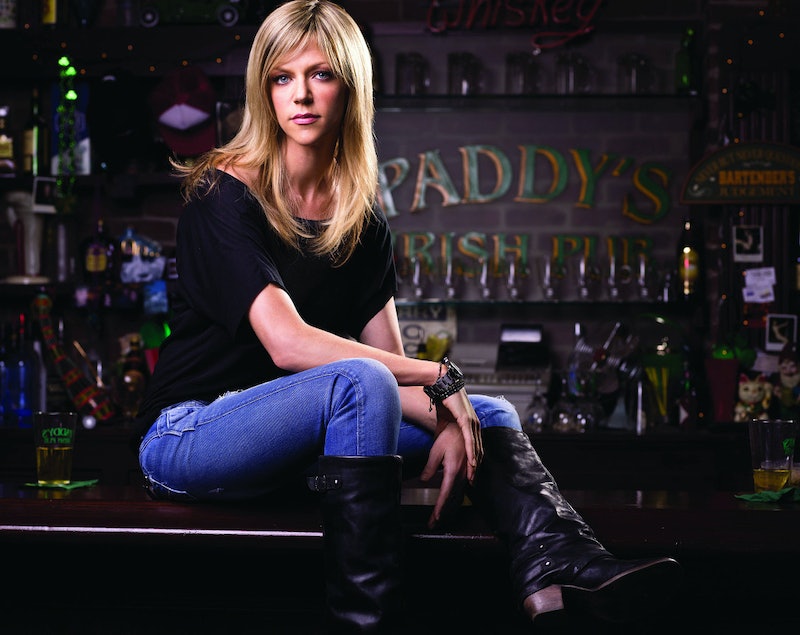 No matter how the series may ebb and flow, I will always adore It's Always Sunny in Philadelphia . So when I read Emily Nussbaum's pro- It's Always Sunny piece in The New Yorker, I was delighted. The wonderful essay celebrates the bizarre, edgy, intelligent, disgusting, and hilarious television program for what it is: criminally underrated. As Nussbaum says, "In a fairer universe, it would be heralded as not merely the best sitcom on television but one of the most arresting and ambitious current TV series, period." I agree.

While Charlie (played by the incredible Charlie Day) is a fan favorite, I've always had a special place in my heart for Kaitlin Olson's Sweet Dee. I've said time and time again that she is one of the best comedic actresses that has ever been on television. I stand by it. And Nussbaum echoes this sentiment:

Why hasn’t the amazing Kaitlin Olson — who gives one of TV’s most radical, down-in-the-dirt slapstick performances — been nominated for best actress?

YES! Thank you! It's lame that Olson hasn't won any awards, but it's even lamer that she's never received a nomination. Come on, Emmys and Golden Globes. You don't get much funnier than Sweet Dee wearing ill-fitting shoes and running head-first into the side of a car.

Sweet Dee, like the rest of the characters, is a garbage monster. The harder she tries to be "conventional," the harder she fails. And I love her for it. She's such a nuanced weirdo. With Sweet Dee, we can lower any expectations that she'll do the "right" thing and eagerly wait for her to do the "heinous yet hysterical" thing.

Olson has always reminded me of Julia Louis-Dreyfus, and whaddya know? Olson and JLD happen to be two of my favorite comedic actresses. Screw gender and genre, they're two of my favorite actors. Period. Both are masters of physical comedy and neither are afraid to get weird. So much shoving, ugly dancing, and yelling. Furthermore, they are proof that women can be just as funny, if not funnier, than men (ew, are we still having that debate?).

JLD on Seinfeld is why TV sitcoms exist. She's infuriatingly brilliant. Her role went beyond being "the token woman" in a group of men. She was a critical member of the group, and never an objectified outlier. And while Elaine and Jerry did date, it happened before the first episode. The rest of the series? They kept it platonic (with the exception of the friends-with-bennies episode, "The Deal").

As someone who has always had a bunch of guy friends, I'm never not happy to see a female character who has platonic relationships with dudes. This isn't revolutionary, but women and men can be just friends. Sweet Dee may be the lone woman in the gang, but that doesn't mean she's destined to date one of her buddies (she is married to Rob McElhenney in real life, which makes their characters' dynamic even funnier). I'm not knocking TV couplings like Nick and Jess (I ship hard), but I think Always Sunny-style male/female relationships are important, too.

McElhenney, Glenn Howerton, and Day (the creators and other stars of the show) auditioned Olson for the role of Sweet Dee. The dudes admit that the character was underwritten, so they had Olson read another character's dialogue. She killed the audition, obviously, and the character of Sweet Dee was born. We owe Olson everything. She has given us so much.

Few things wreck me quite like Sweet Dee dry-heaving while she tries to do a standup routine. Olson's bizarre, twitchy body language is so perfect. We should feel terrible for her, but we're too busy rewinding and replaying. This moment adds a layer to the already tragic narrative of Sweet Dee: she's a failed actress who is desperately clinging to her dream… who happens to have crippling stage fright.

And because the Internet loves me, this super cut exists:

Come on, universe! Give Kaitlin Olson the credit/awards she's deserved for years. Did you watch her dance like an inflatable person?! An award is the least you can do.

More like this
Everything To Know About 'Money Heist: Korea' Part 3
By Gretchen Smail
In Pop Culture, Female Journalists Are Finally The Main Character
By Jenny Singer
‘The Mosquito Coast’ Book Ending Includes A Major Character’s Death
By Brad Witter
'Shadow And Bone' Season 2 Pics Show Mal & Alina Starting A New Journey
By Bustle and Bustle UK
Get Even More From Bustle — Sign Up For The Newsletter