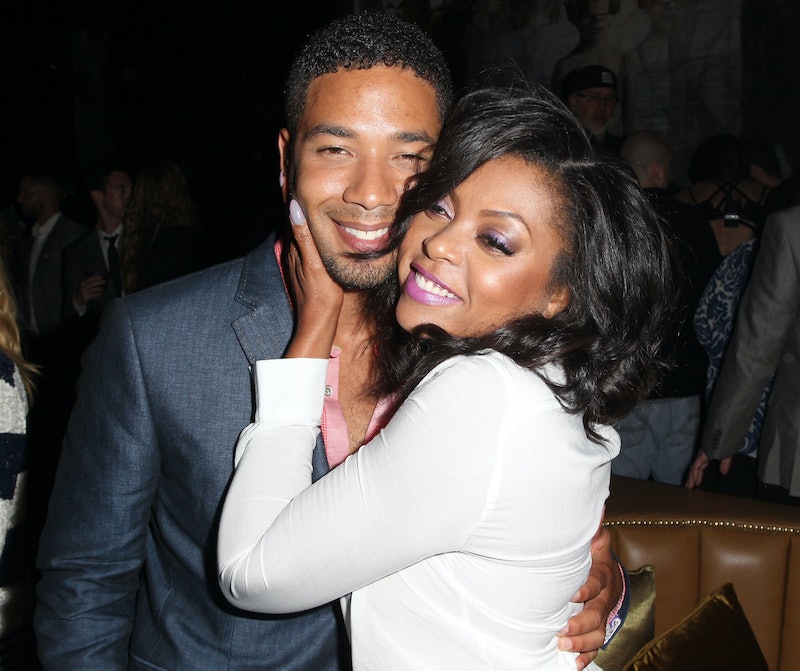 Though we have to wait until September to find out if Cookie and Jamal's relationship will survive Lucious' diabolical plan, the actors behind the mother-daughter pair, Taraji P. Henson and Jussie Smollett, are still as thick as thieves. There may be beef between the duo in the fictional world of Empire, but things are all roses between the two in the real world. Henson and Smollett's chemistry on the show is undeniable. From the moment Cookie arrived at Jamal's apartment after she was released from prison, it was like they had never been separated. It's always wonderful when co-stars get along really well, but it's even more fantastic when they are super tight in real life. Henson and Smollett have walked red carpets together, visited each others homes, and even frolicked on the beach. They vibe so well on the show because they are BFFs in real life.

Despite their bond, Cookie and Jamal's relationship may very well suffer because Lucious' diabolical scheming. During the season finale of Empire, Lucious turns over control of the company to Jamal, and reveals that Cookie tried to smoother him in his sleep. Jamal doesn't take this news or his new position as head of Empire Entertainment lightly and he gives his mama the boot. Though their relationship is a bit rocky at present, we all know that Jamal and Cookie are strong enough to overcome any obstacles that may be thrown their way.

Still, even if their relationship becomes a casualty of Lucious' games, at least we know it's all love between the actors. Here are nine times Henson and Smollett's relationship mirrored that of Cookie and Jamal.

Do you remember when Cookie and Jamal showed up to Lucious' white party draped in fur and gold? Well, Henson and Smollett also coordinate outfits. The duo showed up at the Fox Upfronts wearing coordinating jewel-toned pantsuits.

2. When Henson Couldn't Be Bothered

3. When They Showcased Their Loyalty

On Empire, Jamal immediately gravitated towards his mother despite her 17 year absence. While it took his brothers time to warm up to her presence, Jamal was Cookie's champion and closest confidant. From the looks of it, Henson and Smollett share a similar bond.

4. When Henson Congratulated Her Baby On His Record Deal

Just like any proud Mama bear, Henson was thrilled to hear the news of Smollett's Columbia Record deal. She captured her delight and happiness in this super sweet Instagram post.

5. When The Duo (Along With Gabourey Sidibe) Had A Dance Party

I guess they both felt like making a scene, because the certainly shut down the Fox Upfront red carpet.

6. When They Both Told Us "Bye, Felicia"

One of my favorite moments from the first season of Empire was when Cookie told Anika, "Bye, Felicia." I'm certain that Henson and Smollett were channeling Cookie as they waved good-bye to the cameras.

7. When Smollett and Lee Daniels Basked In Henson's Glory

We aren't the only ones in awe of the real Cookie Lyon. Smollett and Daniels took time out of their exercise routine to show Henson some love. Like her fictional character, Henson stays dressed to kill.

For the majority of the first season, it was Cookie and Jamal against Lucious. From the looks of it, that may extend into the real world. This picture certainly looks like the duo is up to no good, especially since Terrence Howard (Lucious) was on the end of the line.

9. When They Frolicked On the Beach

Though Cookie and Jamal have not yet taken a vacation, perhaps Lucious' incarceration will free up some time for them. Cookie has been working non-stop since her release from prison and Jamal has worked tirelessly to get his career of the ground. Once things at Empire Entertainment calm down, I'm certain we'll see the pair on a mother-son retreat.