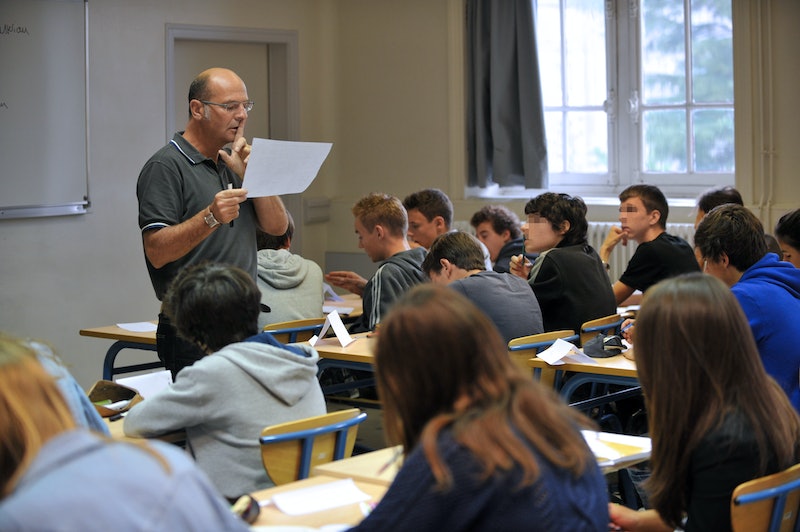 Teaching kids that abstinence-only is the way to be is neither a proper nor realistic approach to sex. Because really, teens are having sex. In fact, nearly 50 percent of high school students are sexually active, and a judge in Fresno County, California has recognized that, reports the Los Angeles Times. A judge ruled that a school district's abstinence-only sexual education programs failed to provide its students with complete information on sexual health and disease prevention, thus failing to comply with California state law.

In 2012, parents, physicians, and the Gay-Straight Alliance Network by the ACLU of California and pro bono counsel, Simpson Thacher & Bartlett LLP went after the Clovis Unified School District for denying its 40,000 students accurate information about contraception and sexually transmitted diseases. Earlier this week, Fresno County Superior Court Judge, Donald S. Black, concluded that the suit brought against the school district was justified because it failed to comply with the California Comprehensive Sexual Health & HIV/AIDS Prevention Act.

The law, which was implemented in 2003, stated two purposes for California’s public schools:

When the only sexual education students are receiving from schools is to wait for sex after marriage, students aren’t receiving the proper education they need to protect themselves from reality. Judge Black concluded that,

“Given the high social cost of teen pregnancy and similar toll on society of HIV/AIDS and other sexually transmitted diseases, the rights vindicated by this suit, access to medically, and socially appropriate sexual education, is an important public right.”

Reproductive Justice Policy Director for the ACLU of Northern California, Phyllida Burlingame said, “Teens deserve complete, accurate health information, which they’ll need at whatever point in their life they become sexually active. This ruling is a huge victory for students.”

During their reproductive health classes in Clovis Unified School District, students were taught that HIV-AIDS could be spread by kissing, according to the Los Angeles Times. They were also taught that the only way to prevent STDs and unwanted pregnancies was abstinence, with absolutely no talk of condoms or contraception. Schools would even show instructional videos comparing a woman who was not a virgin to a dirty shoe. Much of the curriculum was also heavily biased against gay and lesbian students, because, of course it was. Additionally, one video encouraged students to remember the rule, “one man, one woman, one life.” In a county where a third of chlamydia cases were teens, it just makes their non-law compliant, outdated, sex ed programs seem completely ridiculous.

But not all people are on board with this historic ruling. Kelly Avants, Clovis Unified's chief communication officer told The Huffington Post, "We continue to be confident that the District acted appropriately and that our former 9th grade curriculum was unbiased, more than 'abstinence only,' and legally compliant ... We are currently considering whether to pursue an appeal of Judge Black's ruling."

While the suit was filed in 2012, the case was dropped in 2014 after schools changed its policies. However, Black ordered the district to pay for the parents’ legal fees, saying that the suit was directly responsible for the change in the district’s sexual education curriculum. So, while kids these days still aren't receiving the proper sex ed they need, a ruling such as this definitely takes a step in the right direction.