“I can't even” inspires some pretty strong feelings in most people. Some love it; others loathe it. Regardless as to how you feel about it, though, do you actually know where “I can't even” comes from? I didn't — which struck me as odd. I mean, if a phrase has become so ubiquitous that we either use it or hear and understand others using it on virtually a daily basis, we should at least know something about its origins, right?

This is my attempt to answer that question. Brace yourselves, because the whole thing is a lot more complicated than you probably think it is.

You probably don't need me to clarify what “I can't even” means, but just to make sure we cover all of our bases, here you go: It's a phrase reserved for situations in which your emotional response is so powerful that you can't adequately express it in either words of actions. Urban Dictionary's top definition is somewhat… unfortunate from a grammatical point of view; it reads (and imagine this whole strings of verbiage to have a “sic” after ever word), “Yes those three words are a sentence a full sentence well only on tumblr. But is often used when something is either too funny, scary, cute, to have a good reaction too.”

I'm not a grammar fanatic, but good gravy, that's painful.

A more readable definition reiterates the Tumblr connection, albeit in a much more concise fashion: “Used on blogging sites, mostly Tumblr, is an expression that denotes so many emotional responses that the user can't even comprehend what has been said or seen.” My favorite definition, however, reads as follows:

The complete, sudden onset of the cessation of brain activity, brought under the presence of acute stress, which fully affects the person only a short time after it strikes them. Said person, under the duress of the symptoms, demonstrate their affliction by alerting to others that they can't even, in reference to their inability to deal with the symptoms, or their inability to perform simple actions which have been made impossible by their afflictions.

Taking an expression known for its inarticulateness and describing it with a incredible amount of detail?

I'm going to kick this section off with the bad news: It's not totally clear from whence “I can't even” originates. As such, what follows may be an unsatisfying read. Consider yourselves warned.

Know Your Meme pegs its first known usage as occurring in 2005, when a definition for the incomplete thought “I can't” was first added to the Urban Dictionary. According to this definition, the phrase represents “the limit or breaking point in a situation” and should be used “when enough is enough.” However, a post on the Out of the Loop subreddit theorizes that “I can't even” stems from Mean Girls; although this theory remains unproven, it would, if correct, date the phrase to 2004.

In any event, the closely-related expression “What is this I don't even” came about courtesy of 4chan in April of 2007; it appeared in a highly NSFW thread as a response meaning roughly, “This thing that I am looking at is so shocking that I actually have no words to describe it.” Its definition wouldn't appear on Urban Dictionary until 2008, but it's worth noting that began circulating at this time.

One of the funniest jokes about the phrase “I can't even” hit Tumblr in 2010; created by user blaketh, the graphic is little more than a basic pie chart, but the giggles it provides are numerous: 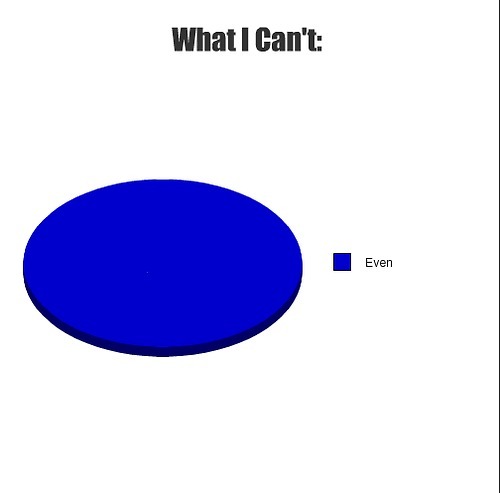 And from there… well, you probably know the rest. It spread far, wide, and fast, sticking its sticky little fingers into all our Internet-based vernacular and making itself as hated as it is essential.

Because weirdly enough, there is linguistic significance to this wacky little phrase — and it comes down to how we use it.

Michael Reid Roberts at The American Reader actually diagrammed "I can't even" in order to see what the construction of it tells us:

“There's a lot going on with 'can' in this construction,” Roberts wrote. “It's a modal verb, like 'must' and 'should,' which means that it describes the relationship of a subject to another verb.” But, he continued, “When 'can' or any modal verb is used without a contextual referent, it becomes virtually meaningless.” So, I would argue, in this case? “Even” becomes that second verb. “Even” shouldn't be a verb… but it is here. We've assigned it new meaning by putting it in this particular construction.

Then, Tia Baheri wrote on The Toast in November of 2013 about the significance of the phrase's spread. In the essay “You Can Even: A Defense of Internet Linguistics,” she described seeing a caption for a link that read simply, “I have lost all ability to can” — that is, “I can't even” — and her amazement at knowing instinctively that it actually meant, “This link is so amazing that I have lost my ability to express my appreciation for it in fully formed sentences. All speech has been reduced to this ill-formed sentence. Thus is the depth of my excitement about this. Click on it. Click on it if you too would like to experience this level of incoherent excitement”:

How did I get all of that from one sentence? My immersion learning of Tumblr-Internet-speak was so gradual that I hadn't even noticed it was happening. One day, scrolling through Facebook I happened to notice that this phrase, a fairly non-standard sentence, was itself a variation on another Internet expression. I was only able to understand it because of a wealth of reference points from other places on the Internet. The friend who posted the comment was tapping into a shared cultural knowledge that I understood.

And then, the following March, Rebecca Cohen explored “I can't even” as a figure of speech known as aposiopesis — but what I find even more interesting than that is, when commenting on Kacey Musgrave's use of it onstage during her Grammy Awards acceptance speech, she noted the following (emphasis mine): “'I can't even' is now a sentence. It's an efficient, Internet-inflected way of saying 'I can't even express how I'm feeling right now. And as Musgrave's acceptance speech demonstrates, the phrase has spread to spoken English as well."

This, then, is the point: "I can't even" is a perfect example of how languages evolve.

There is still, of course, the lingering problem that “I can't even” is grammatically incorrect according to the rules of the English language. Wrote Devin Largent at Thought Catalog, “We have succumbed to the idea that these phrases indicate complete thoughts. And that is something with which I cannot deal.” But maybe we need to stop thinking about it as English. Whether we like it or not, Internet-speak is a language all its own now — so maybe it's time we start treating it as such.