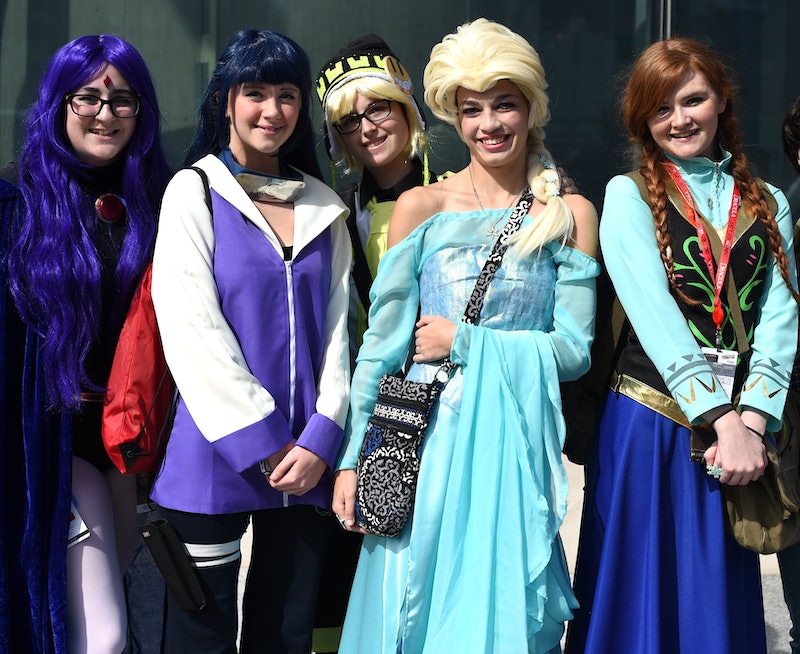 As I write this, I am currently wearing a button down, a pair of suspenders, and have a bow-tie and fez in my backpack (I'm waiting to get out of work and dress up for a Doctor Who exhibit at a local spot). I feel a little bit like Clark Kent, hiding my nerdy superpowers from an office full of unsuspecting co-workers. Not that I'm really that interested in hiding. I am a geek, a fangirl, a card carrying, feels-having, obsessive devotee toward a select group of shows, movies, and books that have captured my heart and imagination and make me incapable of shutting up if someone mentions them in my presence.

But I'm also a pretty outspoken feminist, which at times can seem like a conundrum. The geek community sometimes has an uneasy relationship with its female members. Our street cred is challenged more than our male counterparts, we're accused of just looking for attention or not being "real fans," and we can even been sexually or verbally harassed as women in what many think to be a boys' club. We're occasionally (or, sadly, not so occasionally) made to feel uncomfortable about expressing our love for all things nerdy, and an apparent lack of a safe space within the community can turn a lot of would-be fangirls off. And that means fewer Harry/Draco slash fanfic and Han Solo memes, which I am just not OK with.

But never fear, fellow fangirls, because despite the geek community's reputation for misogyny, it isn't actually entirely true. Sure, trolls most definitely exist, but so do awesome warrior women ready to slay them. And one of those warrior women, Sam Maggs, has written a pretty rad book that helps fangirls find their niche and let their geek flags fly.

The Fangirl's Guide to the Galaxy makes a pretty convincing case that, besides being awesome, fangirls are also bringing a heavy dose of feminism into the geek community. Sure, we still have a ton of female characters running around in tiny skirts and trying (and failing) to keep their double-Ds under control in their Spandex bodysuits. But we also have badasses like Buffy the Vampire Slayer and Kamala Khan who are kicking the patriarchy's butt. Slowly but surely, we're starting to take over.

Not convinced? Here are some of the reasons Maggs gives for why fangirl feminism is not only great but necessary:

We tend to think of comic book stores, conventions, and the gaming universe as being overwhelmingly male and not particularly female-friendly. Pop culture has done a lot to push this idea; just think of the Big Bang Theory guys who hide behind their comic books and hyperventilate when they have to talk to women.

But the geek universe actually has a ton of women in it! Maggs points out that, statistically, the gaming community is 36 percent women ages 18 and up, and more than half of all social media discussions during San Diego Comic Con were started by women.

But even without seeing the numbers, it's not hard to believe that geeky ladies are everywhere. Think of your own friends. How many want to solve mysteries with Sherlock, or are hardcore (or not so hardcore) about their favorite games, or get all the feels when you mention Harry Potter? These are geek girls, and we've got an incredible, supportive community among each other!

Because the Geek Community Has Some Totally Kickass Female Role Models, Both Real...

Maggs interviews some of your favorite famous geeky ladies, like Erin Morgenstern and Jamie Broadnax, and asks them why they identify themselves as a fangirl. When asked how being a geek has positively influenced her life, Broadnax says, "It's allowed me to come to terms with my identity and never apologize for who I am and what I am." Being a fangirl can be empowering, and we should embrace our inner awesome nerd!

Not all of our fangirl role models have to be real, of course. Half the fun of being a fangirl is knowing all about some awesome female characters! Maggs mentions a couple badass ladies from a number of geeky genres (movies, games, anime, etc) to expose readers to new imaginary role models. Although my personal favorite isn't on the list (where is River Song?!), characters like Aveline from Assasin's Creed III and Xena have a ton of fan and feminist street cred. Seriously, introduce your best friend/sister/younger female family member to these women so you can empower each other and fangirl out together!

The dreaded "Fake Geek Girl" title was basically created as a way to undermine a woman's confidence in her interests and exclude her from the geek community (although why guys would want to exclude a bunch of awesome girls who can talk about Star Wars and Cowboy BeBop is beyond me). Repeat after me, universe: There is no such thing as a fake geek girl.

If I consider myself a geek, I don't have to prove my credentials to you. Just because I don't game or only watch the Lord of the Rings movies doesn't give you the right to decide that I'm not a "real" member of your community or that I'm some kind of impostor who pretends to be nerdy to get men to like me. Believe it or not, I don't argue about who the best Doctor is or obsess over Sherlock to attract dudes. (I do it because David Tennant and Benedict Cumberbatch can GET IT. Also because those shows are amazing ohmigod.)

Because Together, We Can Stand Up to the Men Who Still Insist On Harassing Us

Whether you're a lady gamer, a cosplayer, or just a normal nerdy girl, some guys just don't get that we don't like when people are creepy and/or rude to us. Similar to the issue of the "Fake Geek Girl," some guys seem to feel like geek culture is a man's space, and that us womenfolk are invading it. So, they attempt to eliminate the problem by making that space unsafe for us. If I'm in costume (regardless of if you consider it revealing or not), that's not an invitation to touch me, take my picture, or make me feel generally uncomfortable. If I'm a gamer, that's not an invitation to make derogatory remarks, sexually harass me, or invite others to harass me. Basically, geeky girls just want to be treated with respect, like any other human being. Not so hard, right?

More like this
Netflix Shut Down 'Bridgerton' S3 Rumours About A “Very Dark” Storyline
By Bustle
Who Is "Daddy" Pedro Pascal Dating? People Are Thirsting Over The 'Last Of Us' Star
By Alyssa Lapid
'The Traitors' Is Officially Being Turned Into A Board Game
By El Hunt
Here's How Netflix Should Adapt Prince Harry's Memoir Into A Movie
By Ginny Hogan
Get Even More From Bustle — Sign Up For The Newsletter
From hair trends to relationship advice, our daily newsletter has everything you need to sound like a person who’s on TikTok, even if you aren’t.