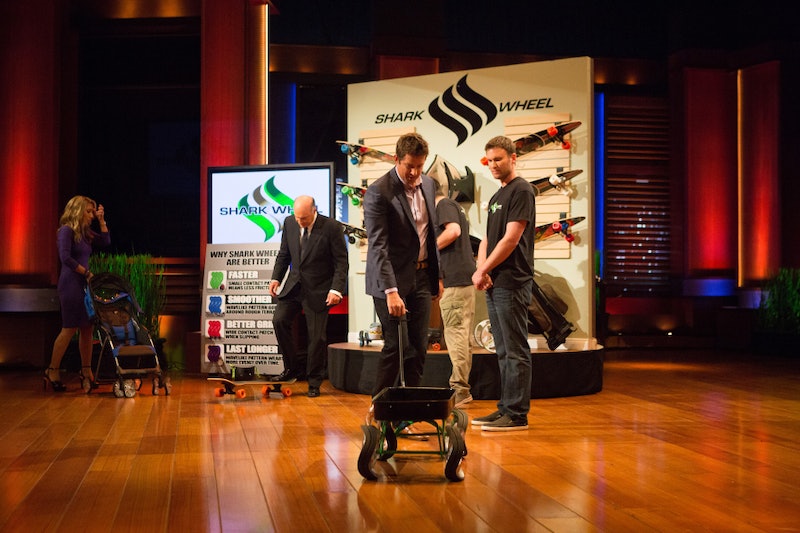 You know how people say, "You don't have to reinvent the wheel," meaning that you shouldn't waste time trying to achieve something that has already been done for you? This is a very common saying because it's usually true, but did you ever stop to wonder what would happen if you did actually try to reinvent the wheel? Perhaps it could be even better than the one some caveman or cavewoman invented. That may be the case with the Shark Wheel, which appears on Shark Tank during Friday night's Season 6 finale

The Shark Wheel is a type of wheel that has a curvy square shape, which makes it perform better in a variety of areas, including speed, grip, and sliding control — more on that later.

But let's get something out of the way first. How perfect is it that Shark Wheel is appearing on Shark Tank? I know products related to fish and the ocean have been on the show before, but this just takes the coral. The only thing that could be better is if that Left Shark from Katy Perry's Super Bowl Halftime performance also showed up to endorse the product. Dare to dream.

I hope the Sharks take a moment to appreciate how wonderful it is that these two came together before they start ripping Shark Wheel to shreds. We all know that they're not easily distracted by cute gimmicks when there's money on the line. However, a shark by any other name would smell just as sweet, and here are seven reasons why the Sharks would probably want to invest in Shark Wheel regardless of what the product is called.

It may not look like it at first, but these babies are on a roll. The Shark Wheel is a high-performance curvy, cube-shaped wheel originally created for skateboards and longboards. OK, so it looks pretty cool, but why would anyone want to change something that seems to have worked fine for centuries? Well, the Shark Wheel can actually increase speed and give you better grip and sliding control so that it makes it easier for you to skate through different kinds of terrain and weather conditions. The closest I've ever come to skateboarding was wearing ROXY T-shirts as a tween, but I imagine a skater would be totally stoked about all of that.

2. How Do You Make A Cube Roll Anyway?

This is really blowing my mind. I thought the very essence of a wheel was that it was round. Apparently, it blew inventor David Patrick's mind too. As explained in his interview with The Atlantic, one day, the avid skateboarder put six modular tubes together into a curved, square-like object that "formed a perfect cube." After he accidentally dropped the object on the ground, he discovered that it could roll... and roll and roll and roll. The helix shape and sine wave tracks of the wheels reduce the amount of surface area the wheels cover, which makes them roll faster. The alternating motion of the wheels also improves the lateral grip, which helps you better maneuver the board. Yes, it's apparently Opposite Day when a cube-shaped wheel may now provide a smoother ride than a round one and Kevin O'Leary may actually be a sweetheart.

3. You Don't Have To Dive Deep For Shark Wheels

You can get your hands on all sorts of Shark Wheel merch through the company's online store. There you'll not only find the Shark Wheels you've heard so much about in a variety of shapes and sizes ranging from $44.99 to $69.95 for a set of four, but you can also purchase boards from Shiver and trucks from Free Soul. One of the boards is even decorated with one of those shark bomber designs popular during World War II, but I do have to say that I am a little disappointed that more items don't have a shark-y touch.

4. This Is Why It's Called Shark Wheel

Speaking of sharks, Shark Wheel didn't get that name just because it sounds cool or as a way to guarantee it would appear on Shark Tank. There's actually a rationale for the moniker. The design of the wheels resemble the jaws of sharks, according to Shark Wheel's FAQs page on its website.

Whether or not the sharks are into extreme sports, they should like the sound of Shark Wheel's sales. Shark Wheel has earned $380,000 in sales since last May and is expected to double that this year, according to The Orange Country Register. Those numbers are not too shabby for a company that just finished an Indiegogo campaign last month, albeit a successfully funded one. Knowing full well about the power of the so-called "Shark Tank Effect," when sales take off for companies right after they appear on the show, we should expect Shark Wheel to do extremely well in the future, whether or not it snags an investor.

6. They May Have Gotten An Investment

As you can see, Shark Wheel has been having fun with a GoPro camera for the past few months. It just so happens that Nick Woodman, the founder and CEO of GoPro, will be a guest shark during Friday night's episode of Shark Tank. Does that mean Shark Wheel may have struck a deal with Nick and got a free GoPro camera in the process? Maybe, maybe not, since GoPro cameras were basically made for adventurous activities like skateboarding. But also for that reason, Shark Wheel does seem like something Nick would be into, so who knows?

If just the sight of a skateboard is too extreme for you, Shark Wheel will be rolling out (ha) a line of scooters soon. But wait — there's more. Since Shark Wheels are just wheels, they can probably be used for anything that rolls. The company sees its wheels being used for everything from office chairs to wheelchairs to rolling luggage.

You know what they say: If there's a wheel, there's a way. Or something like that...