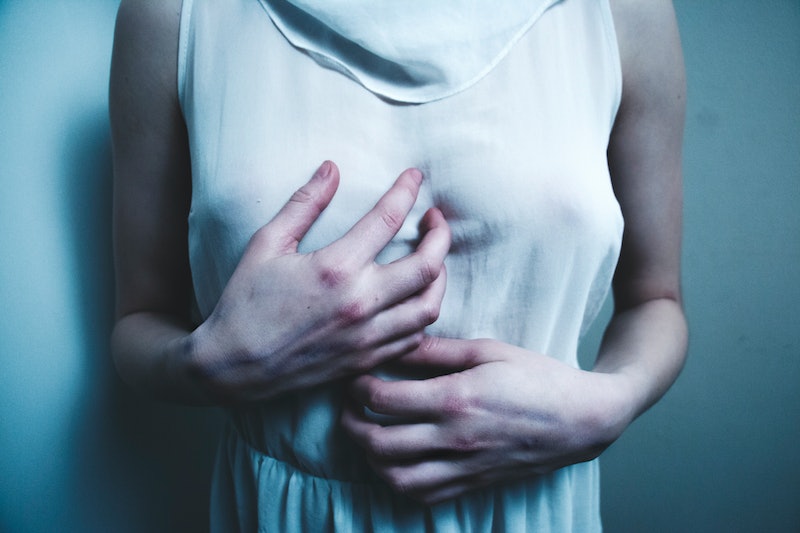 The statistics don't lie: women are treated for more mental illnesses than men. Twenty-nine percent of women have been treated for a mental illness of some kind, as opposed to 17 percent of men, according to the British Mental Health Foundation. And types of mental illness treatment have a wide gender divide, too: women are much more likely to be treated for illnesses like depression and anxiety, while men are more likely to go for treatment about substance abuse. But the argument over what's really behind this imbalance — and whether it represents what's really going on — has been raging for years.

Any scientific study that tries to probe a perceived divide between the sexes is open to accusations of sexism — and mental illness, with its attached stigma, is a tricky problem on its own without the added layer of gender to complicate things further. The type of illness being discussed also matters: schizophrenia, for instance, appears to hit both genders equally, according to the World Health Organization, as does bipolar disorder, though genders seem to develop and feel them differently. But work is being done — and we're beginning to understand what's actually going on in the battle for female mental health.

Finding the "real source" of the gender divide is a complicated question: is it the chicken or the egg? Do women really have more mental illnesses, or do they just communicate more readily with doctors? Do they suffer because we expect it of them, or because they're more physically prone and societally vulnerable — or some combination of both?

Professor Daniel Freeman, an expert at the University of Oxford who's worked at length on the problem, told Bustle via email that the "research has only just scratched the surface".

"The best U.S. survey showed that 35 percent of women met criteria [for a mental illness] during the previous year, as compared to 30 percent of men," he said. "And this could well be an underestimate."

So what's really going on? Here are eight factors why women are seeking treatment from mental illness more often than men.

1. Men Are Less Likely To Seek Help Than Women

Women are proportionally more likely to seek help than men — because, Professor Freeman tells Bustle, of "men’s reluctance to admit to “unmasculine” feelings or experience."

"We can never ... know exactly how many men are not reporting psychological problems," he said. He mentioned a study of fear in men and women that showed that men habitually underplayed their fear levels to researchers, presumably because they wanted to seem more "manly" and less vulnerable. Women, however, are more likely to seek out help and a diagnosis, which can skew the picture of actual illness levels. But that's not the whole story.

Depression and anxiety aren't purely physical diagnoses — while genetic vulnerability plays a part, they're often products of changes and stress in the environment. Experts increasingly believe that the enormous pressures on women in today's society are a huge contributing factor to their vulnerability to mental illness.

"Increasingly, women are expected to function as carer, homemaker, and breadwinner — all while being perfectly shaped and impeccably dressed —while having less reward and control," Freeman told me. "Given that domestic work is undervalued, and considering that women tend to be paid less, find it harder to advance in a career, have to juggle multiple roles, and are bombarded with images of apparent female ‘perfection,’ it would be surprising if there weren’t some emotional cost."

We're also uncovering the very real impact that sexism and misogyny have on women's mental health. A researcher on the subject, Dr. Laurel B. Watson, told the feminist writer Jessica Valenti in January that living under the constant threat of sexual violence and abuse causes women to live in stress and fear. “Over time, existing in a state of hypervigilance has a negative impact, and leads to a higher level of psychological distress," she said.

3. Women Are More Likely To Be Poor And/Or Abused

Add to the daily stress of womanhood the added possibility of poverty and abuse, and you have a pretty toxic cocktail for depression and anxiety-related disorders. Anybody who reads the news knows that women are more poverty-stricken than men worldwide; the UN estimates that 70 percent of the 1.3 billion people in grinding poverty worldwide are female. A study in 1990 showed that, unsurprisingly, the stresses of poverty and deprivation are pretty conclusively linked to the development of mental illness, and the vulnerability of women puts them particularly at risk.

Women are also, sadly, hugely more likely than men to be abused at some point in their lives, particularly in childhood. "There are a range of social and psychological factors that especially impact on women that should lead us to expect differences in overall rates of mental health problems," Freeman said to me. "The most obvious example is childhood sexual abuse."

The U.S. Department of Justice says that 62,939 cases of child sexual abuse were reported in 2012 — and seven percent of girls in grades 5-8 reported they'd been sexually abused in their lifetime. Unsurprisingly, childhood sexual abuse is a pretty strong risk factor for depression later in life.

Studies show that "ruminative" thinking, which means incessantly probing and repeating a thought (it comes from the Latin word for chewing cud), is a contributing factor to developing depression: the American Psychiatric Association calls it "the depression-rumination cycle." Dwell on a thought incessantly and you'll drive yourself into a hole.

Studies have shown that women are more prone to ruminative thinking than men, though the reasons for the difference aren't yet known. A study in 2001 suggested that ruminative thinking in women was drawn from their feeling of responsibility in relationships, while another suggested that it was inspired by a lack of "mastery," or self-belief. Basically, we obsess too damn much.

5. Women Have To Deal With More Hormonal Shifts

A potential risk factor for the development of depression is a shift in hormone levels in the body (which is why postpartum depression is a thing; hormones go haywire after birth.) Hormone imbalances play havoc with mood, specifically the Big 3: cortisol, oestrogen, and progesterone. And women are more prone to hormonal tides and ebbs over their lives, from adolescence to pregnancy, birth, and menopause. This is, obviously, annoying, but it's unfortunately true. (We also live longer than men and will consequently get old, which is a prime time to develop depression. Way to go.)

6. Mental Health Itself Is Viewed In Gendered Ways

We still see women as fundamentally less stable than men. It's just a fact — and it's borne out by depictions in media and entertainment. This kind of internalized sexism is likely a contributing factor of our greater development of mental illness; a study in 2009 found that internalising sexist ideas led directly to women feeling psychological distress.

The stereotypes of mental strength in genders — that women are more emotionally intelligent and empathetic, while men are seen as objective and emotionally reserved — may also be self-predicting in some ways, like in the propensity for women to have internalizing rather than externalizing disorders (depression rather than alcohol abuse). Belief in men's mental inability to handle emotion, for instance, may be a contributor to male alcohol dependency and suicide rates: they don't believe they know how to cope, and don't want to ask. And women's belief in their own emotional intelligence may lead to the feeling of relationship responsibility that feeds into ruminative thinking and treatment.

Before you hold up your hands and cry foul, hear this one out; it's based on a study from 2001 of 2974 sets of twins, which found that if one twin had depression, their genetically identical twin (with 100 percent of the same DNA) would also have it, while fraternally identical twins (who are only 50 percent genetically identical) didn't. Depression, then, seems to have a genetic base — and the study also found that female twins were far more likely to develop it than males.

We've yet to determine exactly what the genetic code for depression is. A 2011 study found that genetic variations on one chromosome, 3p25-26, are linked to severe recurrent depression, but there was no data on whether it showed up in women more than men. And one chromosome may not tell the whole story. So stay tuned on this one.

An interesting study in 2010 revealed that, not only are women receiving much more stress from their environment, their brains may cope with it differently to men's — because of a particular stress hormone. Female rats had more of a particular stress hormone in their brains to begin with, and after being exposed to stress, it stayed around in the brain causing havoc — while male rats had a way to "shut off" the parts of the brain that were interacting with the stress hormone. The result? Female rats stayed stressed and anxious for longer, while male rats could quietly adapt and go eat some tasty lab food. If this applies in humans too, it explains a lot.

Professor Freeman thought it was significant too. "If we think of stress as a chisel striking a rock," he told me, "the blows women receive from the environment may sometimes be stronger (think childhood sexual abuse), more persistent (think social role burden), and differently angled (think relationships). This might explain why women experience more psychological problems than men. But where exactly the rock splits — that is, the specific disorder that develops — may depend on psychological and biological fault lines. And perhaps these fault lines differ by gender." One of those fault lines, it seems, may be receptors for stress hormones.

So next time anybody tells you women are "just crazy," tell them it's not their fault: it's society, genetics, poverty, hormones and the rumination cycle. That'll shut them up.