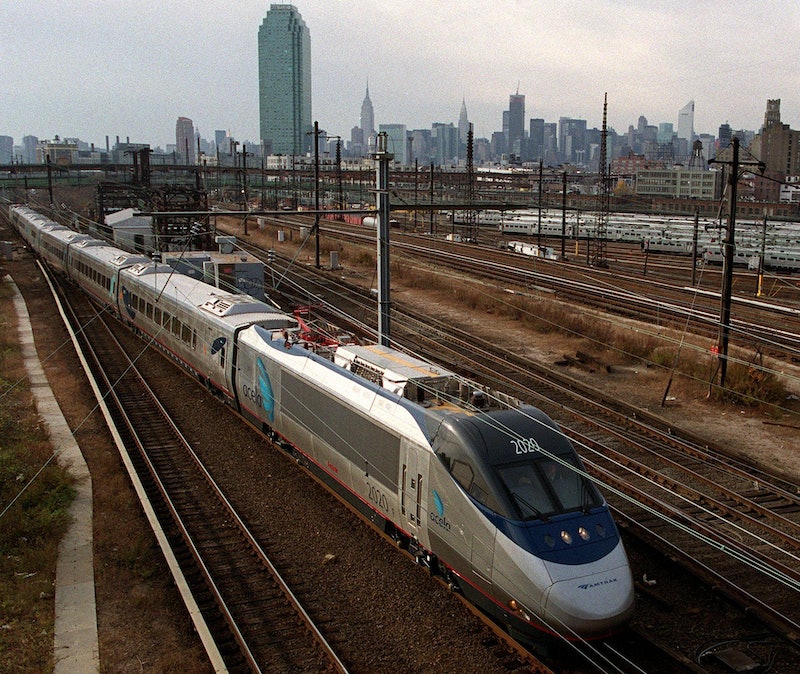 Tuesday's devastating Amtrak crash that has left eight dead and more than 200 injured — and sparked a showdown over Amtrak funding in Congress — has put a glaring spotlight on train safety. Though train derailments are actually quite common, each time a deadly incident like this occurs, it's normal to question the entire mode of transportation in general. While most people might know that motorcycle and car travel are the most risky forms of transportation, in light of the Amtrak crash, you might be wondering one thing: is riding on trains safer than flying on airplanes? If you're a frequent train traveler, you might not like the answer.

But trains are still only the second-safest option, with the first-safest option being — you guess it — flying.

According to that same study, the number of deaths per billion passenger-miles caused by airplanes is a measly 0.07. And this statistic is just one of many that illustrate just how safe air travel is.

Last September, the Swiss-based Bureau of Aircraft Accidents listed the average rate of crashes was 2.1 per one million flights, which means you have a one in 15,000,000 chance of being in a plane crash. You are 15 times more likely to get struck by lightning. And this statistic was determined after the series of high-profile crashes that made aviophobes swear off flying for good, like the mysterious MH370 disappearance and the downing of MH17.

Similarly, in 2012, The New York Times cited Arnold Barnett, a professor of statistics at M.I.T., for this statistic: between 2008 and 2012, the odds of dying in a plane crash for passengers in the U.S. were one in 45 million flights. The Times further emphasized the point by revealing that with those odds, a passenger could fly every single day for an average of 123,000 years before dying in a plane accident.

And a Forbes report from March, which came out in the wake of the Germanwings crash, went even more specific by listing the odds of dying in a plane crash on one of the 39 bottom-ranked airlines with the worst accident rates as one in 2 million. Still very unlikely.

But, as I mentioned before, the overwhelming evidence that flying is safe should not take away from your confidence in train travel. Ultimately, it is also very rare to die in a train crash, especially for passengers. According to the National Transportation Safety Board's stats, of the 891 train deaths in the U.S. in 2013, only six of them were passengers. The vast majority were pedestrians or drivers who were struck by a train.

Another factor to consider in comparing train accidents and plane crashes? While trains have more accidents, plane crashes typically kill a lot more people per incident. In 2014, there were 990 plane-related deaths, but only 21 fatal airliner accidents. That's an average of 47 deaths per flight. So if you think of accidents in terms of how deadly they are of average, then flying would be significantly more deadly than riding a train.

But at the end of the day, the main point through all these statistics is: both flying and riding in trains are safe ways to travel. When you're in a car, however, always wear your seat belt. And just try to avoid motorcycles altogether. Images: Getty Images (3)