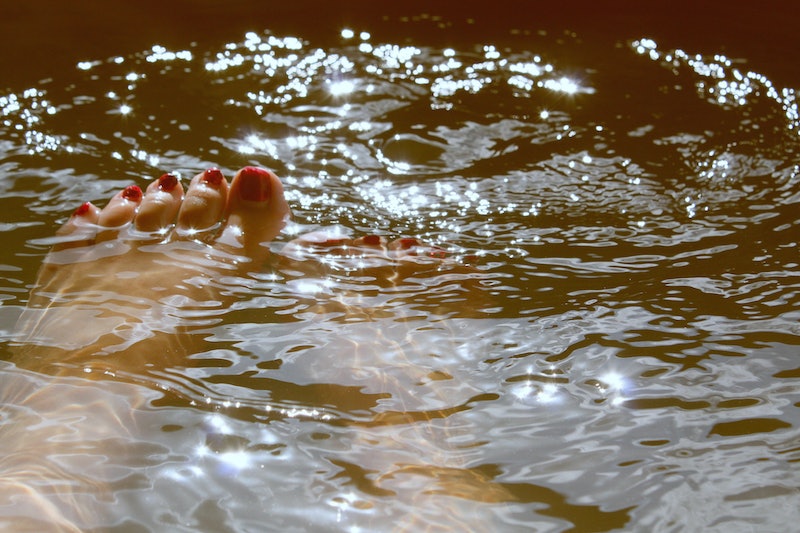 With age, we're expected to collect certain life skills. By an early age, it's typical for kids to learn how to swim. So as adult, it's easy to assume that everyone has the ability to swim. It's like riding a bike! Everyone knows how to do it! Except that no, not all of us exactly know how to swim. Some adults can't swim and as such, they get an earful (but not a swimmer's ear because they're not swimmers! Yuck yuck yuck. Sorry, I had to.) of commentary from everyone they know — and a few people they don't know — about how "weird" it is that they are grown adult humans who lack the ability to swim. And honestly, it can be a bit annoying to hear all the time.

It's not like my parents didn't make a genuine attempt to get my sister and I mobile in an aquatic setting. (That's right, my 29-year-old sister also can't swim. She'd probably tell you she's less skilled at it than I am.) They signed us up in earnest for swimming lessons as small children, a crucial detail as we lived in Florida's Gulf Coast area. We lived near water, so it felt even more pressing for us to know how to survive in it. We obediently dunked our heads and faces half in, practicing blowing bubbles in the water, even though we hated it. The two of us did so poorly that one instructor grew frustrated and actually threw me in the deep end. I guess he thought I was bluffing and that I would swim to safety when literally tossed into a dire situation. I did not. He had to scoop me from sinking to the bottom.

Anyway, despite later attempts by countless life guard and pro surfer boyfriends and friends, I never quite learned. Guess what? I'm still alive, not drowned (although admittedly now living in a landlocked area, but still), and not alone. Lots of grown folks can't swim! Here's some stuff you should probably stop saying to adults who can't swim:

"Did your parents never sign you up for lessons?"

As previously mentioned, mine did but unpopular confession time: sometimes I quit stuff. Swimming is one of these stuffs. A lot of people attempt to learn as children and — like anything else — sometimes it doesn't come easily, and when the lesson cycle ends, so do any attempts to adopt the skill. Do you remember how to karate or ballet from fourth grade classes? Probably not. Also, maybe the answer is no, someone's parents didn't sign them up. Maybe they couldn't afford it, or maybe something else entirely prevented it from happening. You don't know their life, is the point, and you don't know what kinds of painful memories might be triggered by your casual judgment of their parents' choices.

Well, luckily I dig sedentary activities best enjoyed in the sun such as: reading, drinking, making the sand squeak with my bare feet, and laying completely still. We non-swimmers also are allowed to enter the water. It's called wading and it's a skill that's far easier to master than swimming. There are a billion things you can do at the beach that have nothing to do with being in water deeper than your head, so this is a silly question.

Not particularly. As I mentioned before, there's plenty to do around water that doesn't involve propelling your body through it. And apparently, this condition isn't that uncommon. One in five adults in England can't swim, yet they continue to lead (presumably) fruitful lives! Also, it's not like that's exclusive to the UK: 37 percent of adult Americans can't swim the length of an average recreational pool. So who's left out? We've got plenty of company over here in the non-swimmers club.

"Water parks must be so boring for you."

Personally, I'm not a wild fan of water parks but that mostly circles back to the whole "there's strangers' pee everywhere" part. As a whole, too, most parks have plenty of slides and shallow pools and other things to distract you from the pee thing while also not drowning. So there's that.

"Do they make water wings for adults?"

As it turns out, they definitely do. Adult water wings exist by the plenty. I don't own any, but if they're an option in canoe or kayak rentals, I have no shame in springing for 'em.

Last I checked, Waterworld wasn't a real thing. Evolution has allowed us to remain relatively safe and not completely submerged in water most of the time. But if you're a non-swimmer, no one is probably forcing you on to a dinky motorboat out into the center of the ocean. Most drownings happen before age 14 so if you've made it to adulthood, you're probably fine. I tend not to go near super deep water, away from something to grab onto, by myself, very often. So yeah, I guess I'm not able to be a professional solo ocean-crossing kayaker or whatever.

Yeahhh, but that doesn't seem the same as swimming, right? Also, I'm pretty sure it's not as good when done face-down, which is the way my body naturally does it.

Oh dang! I never tried that! Got it. Thanks for the revolutionary advice!

"But it's such a good workout!"

So are lots of other things. Next.

Our friendship would be done. For real.

Seriously. Now hand me a fresh marg and step out of my direct sunlight. I'm laying here. Enjoy your laps.