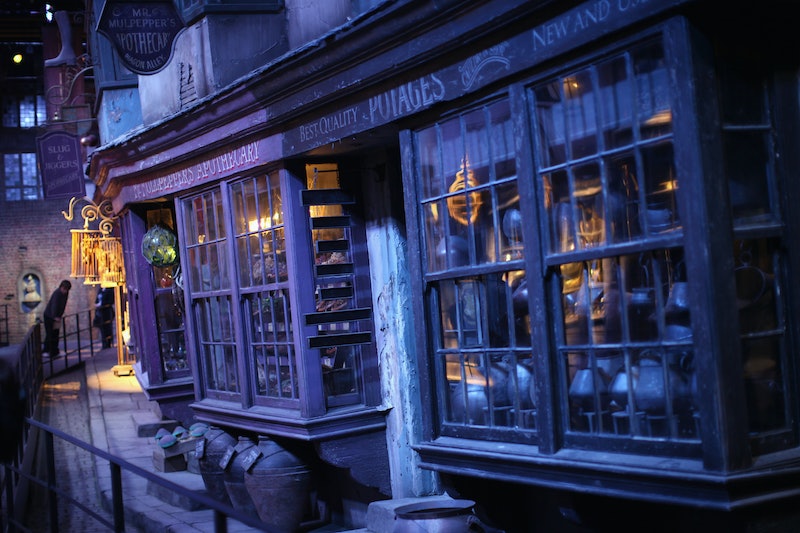 There's no question that the world of Harry Potter is a sparkly magical wonderland where all one need worry about is not getting eaten by a Dementor (but how bad could that be, really?). But have you ever thought about the real-life wizardry that went into creating and building the eight HP movies' intricate sets?

Jody Revenson's Harry Potter: Magical Places from the Films , a gorgeous leather-bound tome, offers an inside look at the films' comprehensive set designs, detailing the studio's creative process from sketches through to fruition. The book is organized chronologically, including beloved spaces and places from each of the eight movies. The first chapter, for example, displays artists' sketches and film stills from the Dursleys' House; while later chapters display magical indoor spaces, like the Herbology Greenhouse; the Ministry of Magic; and The Burrow, as well as Hogwarts' fantastical grounds, including the eerie Forbidden Forest and the lively Quidditch Pitch.

Each detailed look at the films' environments includes accompanying "behind-the-scenes photographs" and "supplementary text that highlights filmmaking secrets from the Warner Bros. archives." Like, for example, that set decorators encouraged the many extras to carve their names and doodles into the long tables in the Great Hall, in order to make the tables look authentically aged.

The images below are pulled right from Revenson's book: think of them as a teaser trailer to the book, which shows how the muggle magic of film combines with Hogwarts' wizardry to create something truly amazing. All of these images contain details that even the most die-hard Harry Potter fan probably wouldn't have noticed — but definitely needs to see.

Each of the products in the Weasleys' joke shop was designed and crafted by the design department. "'I think we created about one hundred and forty different product designs,' says [Eduardo] Lima. 'And then we would need to make two hundred of an item, four hundred of another, even two thousand of some,' recalls [Miraphora] Mina. 'All made by our crew in-house. Like elves.'"

"The graphics department, headed by Miraphora Mina and Eduardo Lima, created the books for all the films, binding them in cloth and leather in dark earth tones with gilded pages."

The common room remained the same throughout the eight films. Next time you binge-watch the movies, see if you can spot this: "one constant prop was various issues of the wizard comic book The Adventures of Martin Miggs the Mad Muggle, created by the graphics department."

"Snape's Potions classroom in Harry Potter and the Sorcerer's Stone was shot on location in the Sacristy at Lacock Abbey, which provided several locations for that film: in addition to Professor Quirrell's Dark Arts classroom, the room housing the Mirror of Erised and the courtyard featuring cloister walks were also shot there."

"In order to prevent the actors from eating up all the props, they were warned that the candy had been covered with a lacquered finish, which was actually a well-intentioned fib."

"The walls were decorated with artwork drawn by children of the art department crew, and the prevailing color palette reflected the ginger-topped Weasleys' obvious favorite colors: red and orange."

"The interior of the Lovegood house set was designed to appear 'lovingly vandalized' by Luna Lovegood."