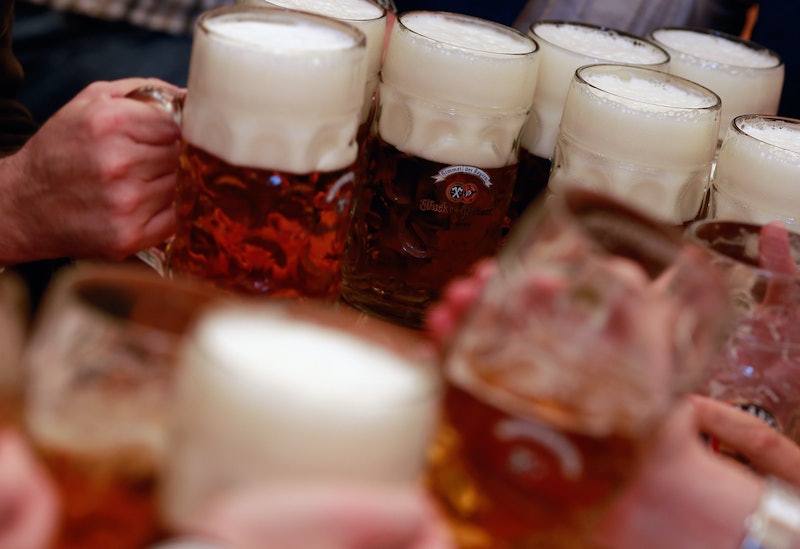 Attention, beer aficionados! There's a company called Fizzics that wants to make cheap beer taste delicious. Isn't that great? The answer is yes. Yes, it is.

Fizzics, which might be the most entertaining name for a company I've seen in a long time, is currently crowdfunding to produce a machine that will "elevate store bought beer into draft quality beer" in your own home (or at the beach, or while camping, or pretty much anywhere else you're willing to cart it), thus delighting beer lovers on a budget everywhere.

The machine works with any store bought beer. You just put a can or bottle (up to 64 ounces) into the chamber and put the tube into the can or bottle. The chamber is then pressurized in order to control how fast the beer pours into the glass. And when you're ready to add the head or foam, you flip the handle on top of the machine backwards, and the machine uses sound waves to break up the bubbles in the beer to create the perfect pour. (For those interested in the physics of Fizzics, the Indiegogo page goes into great detail. I highly recommend checking it out, because it's fantastically cool.)

According to the manufacturers, using Fizzics enhances the flavor of any beer, making even cheap brews taste better. The system prides itself on being easy to use and not needing any extra add-ons like CO2 cartridges, and on being easy to clean.

All of which looks pretty awesome. Which is only what you'd expect, I suppose given that the founders are clearly huge beer enthusiasts.

And other beer lovers seem to be super into the idea as well. Here's a video of Ben Popper reviewing the product for The Verge:

The project has only been on Indiegogo for nine days, but has already raised $86,000, well above their original goal of $50,000. But potential donors still have a chance to get a Fizzics for a donation of $119, as opposed to paying the planned retail price of $199 once the product officially goes on sale. So if you're a beer fanatic, now might be a good time to get in on that.