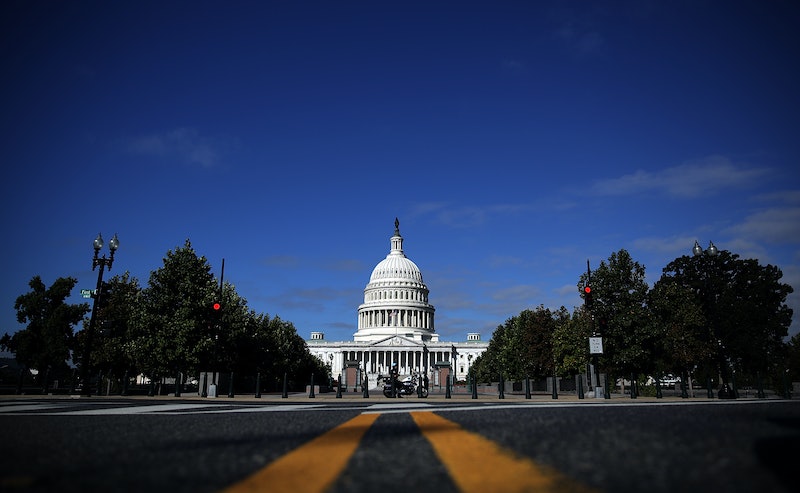 On Wednesday, the House of Representatives passed a bill that would ban abortions after 20 weeks of pregnancy. After failing to pass the Senate last year and then House Republican leaders canceling a vote on the bill in January, the bill was revamped to replace a requirement that women report sexual assault to the police with a provision requiring rape victims to receive medical attention and counseling 48 hours before they can have an abortion. The Pain-Capable Unborn Child Protection Act (doesn't the name itself make you cringe?) would prohibit abortions 20 weeks after fertilization except in cases of rape, incest for girls under 18, or if the mother's life is in danger. Republicans are pushing the bill, which would completely violate Roe v. Wade, based on the widely disputed theory that fetuses can feel pain at 20 weeks.

So, who's behind this problematic bill? Two Republican members of Congress sponsor the Pain-Capable Unborn Child Protection Act. Trent Franks and Marsha Blackburn first introduced the 20-week abortion ban in 2013 and reintroduced it in January in the hopes that a now Republican-controlled Senate would pass it this time around. Here's what you need to know about the two representatives.

A self-identified "Reagan Republican" from Arizona, Franks is in his seventh term in Congress. His primary focuses while in office are on national defense and children's issues. He serves as co-chair of the Orphans and Vulnerable Children Caucus and the Congressional Caucus on Adoption, and he fervently opposes abortion. On his Congressional website, Franks explains his commitment to the "sanctity of life." He writes:

I have made it one of my priorities in public office to fight for the end of abortion on demand. I believe that life begins at conception; that each life is given by our Creator. If all of this is true — and I believe with all my heart that it is — then our nation has engaged in the greatest genocide known to mankind on the history of this planet.

In 2003, Franks stood beside President Bush as he signed the Partial-Birth Abortion Act, which prohibits intact dilation and extraction abortions, a method used for late-term abortions. He also introduced the Susan B. Anthony and Frederick Douglass Prenatal Nondiscrimination Act of 2009, which didn't become law, but aimed to ban abortions based on the sex or race of the fetus. His website says he plans to "reintroduce this legislation until it is passed through the Congress."

A Republican congresswoman from Tennessee in her seventh term, Blackburn says on her website she has a reputation as a "bi-partisan leader and policy expert on telecommunications issues and intellectual property rights." She's a founding member of the Republican Women’s Policy Committee, which works toward "influencing, advancing, leading, and communicating the Republican agenda in the House of Representatives... from a woman's perspective."

Congressman Blackburn believes the use of taxpayer money to fund big abortion businesses like Planned Parenthood is both morally indefensible and fiscally irresponsible, which is why she introduced the first pro-life bill of the 113th Congress.

In 2013, she introduced the Title X Abortion Provider Prohibition Act, which aimed to eliminate federal funding under Title X to abortion providers, and reintroduced it in January. The bill is currently in the House subcommittee on health.